Brett Morris wrote his name into Premiership history on Sunday as he became the first man to score hat-tricks in the opening two rounds of a season.

The 34-year-old Sydney Roosters winger scored three times in the hammering of Wests Tigers this weekend having bagged the same tally against the Sea Eagles seven days ago. Having dominated, Roosters’ Morris got the touchdown in the 72nd minute, latching onto Lindsay Collins draw and pass after a bomb was uncontested.

Cronulla later lost 12-10 against Canberra with halfback Chad Townsend missing two shots in the dying stages of the game and landing just one goal in four attempts. The Sharks trailed 12-0 at half-time but fought back and had opportunities to level after centre Josh Dugan but couldn’t find the important leveller.

"I feel like I let the boys down. Sometimes stuff doesn't go your way," Townsend told ABC Sport. "I've busted my backside all summer to get the goal-kicking job. I backed myself to kick it. I'll move onto the next job."

The South Sydney Rabbitohs recorded their first win of the NRL season when they beat Manly Sea Eagles in Sydney on Saturday morning. Star scrum-half Adam Reynolds left a reminder to Rabbitohs’ fans of just the kind of value he adds to his side, as he led them to a 26-12 victory over Manly at a rain-soaked Brookvale Oval.

Incredibly, Reynolds only needed 40 minutes to leave the Sea Eagles behind the 8-ball, scoring a try and kicking a huge 40-20 in the first half before a head knock ruled him out of the game early in the second-half, leaving him in doubt for Friday's big match against the Sydney Roosters. 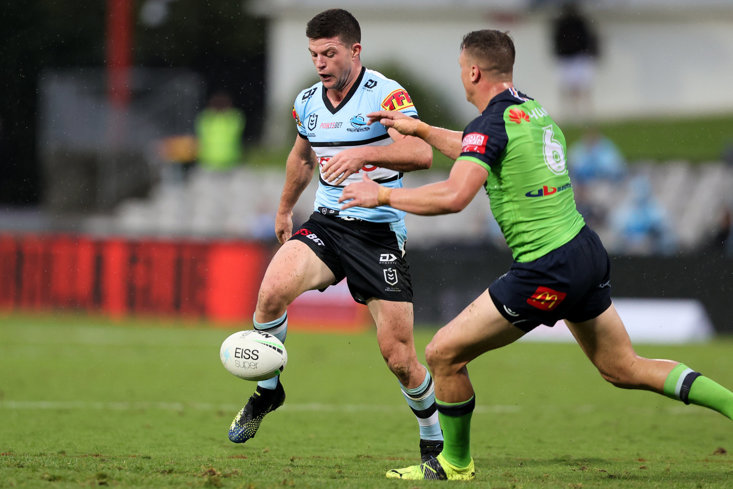 CHAD TOWNSEND IN ACTION AS CANBERRA LOST TO CRONULLA ON SUNDAY

Elsewhere on Saturday in a clash between two first-round losers which saw both sides make 24 errors in total, it was St George-Illawarra Dragons who bounced back the strongest to open their account for the campaign, beating the North Queensland Cowboys in Townsville 25-18. Particularly impressive, especially for Dragons fans, was the performance of under-fire captain Ben Hunt, whose kicking and running game was pivotal in the victory.

Penrith Panthers made history in Saturday’s other NRL match by routing the Canterbury-Bankstown Bulldogs 28-0, breaking a 102-year record in the process. The Panthers’ shut-out was the third consecutive regular-season game that the Sydney-outfit have held their opponents scoreless, beating the Bulldogs 42-0 in round 20 last year and the Cowboys 24-0 in round one this year, matching the Roosters’ record in 1919.

The Bulldogs, meanwhile, became the first team since the Titans to lose nine straight at home, making them the fifth team to do so in the NRL era.

On Friday, million-dollar man David Fifita struck twice to help the Gold Coast Titans demolish the Brisbane Broncos 28-16. Fifita, who left the Broncos for the Titans last summer for over $3m, helped extend his former side’s miserable club record-setting run of 13 straight defeats. In the other of Friday night’s two NRL games, the Knights left it late to beat the Warriors, with Bradman Best busting the line and offloading to winger Hymel Hunt to secure the win with just five minutes of play left.

Thursday night served up arguably the best match of round two, with the Parramatta Eels edging out Melbourne Storm in a 16-12 thriller. With the score locked at 12-12 on 77 minutes, Eels half Mitchell Moses launched a bomb to winger Maika Sivo, who steamed through down the left flank. Beating opposite number George Jennings, Sivo caught the ball before landing the match-winning try, his second score of the evening.