Football
News
Graham Potter's men were held to a goalless draw by Leeds at the Amex Stadium
Conor Keane
19:47, 27 Nov 2021

Brighton and Hove Albion dominated Leeds United at the Amex Stadium on Saturday evening but were left to rue their missed chances as they were held to a 0-0 draw in the Premier League.

There were plenty of opportunities for Graham Potter’s side to punish the ever-fragile Leeds defence but it seemed as though the players on the pitch had all left their shooting boots at home.

Striker Neal Maupay had been recalled to the starting lineup and with the number of chances he squandered, you can understand why his manager had been reluctant to show the faith in him over recent weeks. The French forward looked like a player devoid of any confidence, and he and his team-mates will be disappointed that they came away with just a point knowing that three would have brought an end to a run of seven league games without a win.

Marcelo Bielsa will be largely pleased with his side’s point considering the barrage of attacks, particularly down the left flank, they faced throughout the game. But he will be disappointed with the attacking quality showcased by his players when they got into strong positions, as they wasted possession on several occasions. It seemed at times as if they were content with holding out for the point, although it only pulled them three points clear of the relegation zone ahead of the busy festive period.

The Argentine boss will be praying that key figures Luke Ayling and Patrick Bamford will be ready to return to match action sooner rather than later because it is clear how much the pair have been missed this campaign. The Yorkshire outfit have really missed the latter in recent months as he not only brings goals to the table, but also a creative ability to bring others into play - something that was certainly lacking in Leeds’ performance. 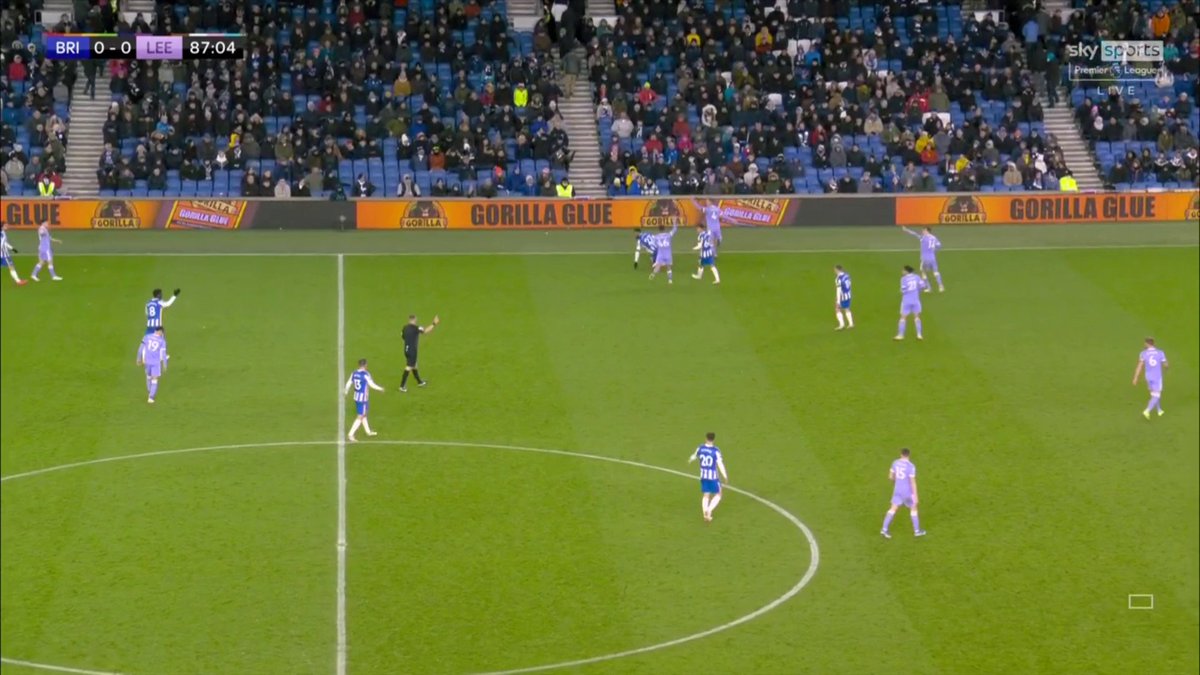 The Seagulls started off with some positive play and had a chance early on as Tariq Lamptey put a cross in from the right but Jakub Moder’s volley blazed over the crossbar. Shortly after, Maupay did exactly the same but in a better position with an open goal to aim at – nobody inside the Amex could believe it.

It was then Leandro Trossard who came close to opening the scoring for the hosts, but his effort from the edge of the area was brilliantly saved by Illan Meslier. The visitors did start to grow into the game and their star man Raphinha was appealing for a penalty after being tripped by Trossard but referee Craig Pawson waved away the protests. Brighton were undoubtedly the more threatening side head into the break with Lamptey causing serious problems for fellow defender Junior Firpo.

Bielsa saw the problems tormenting his left side and Firpo was replaced for the second-half by Pascal Struijk as Jamie Shackleton replaced Kalvin Phillips. But still Lamptey wreaked havoc with his speed on the ball, making it look so easy as he got the hosts into threatening positions.

Leeds started to impose themselves on the game by being quicker to the ball but they were very sloppy when they did gain possession, ruining some great chances to hurt Brighton on the break. It was the home side who continued to create the most clear-cut chances though, but they struggled to find composure when pulling the trigger - there were too many misses to count.

In one of Leeds’ few successful attacks, substitute Tyler Roberts was able to force Robert Sanchez into a low save after recently entering the game. He had even better chances in quick succession in the latter stages of the game but was denied by the goalkeeper again and then the woodwork.