Football
News
For VAR to have any chance of success in the Premier League, we must be able to hear the referees as they make decisions
Simon Lillicrap
16:24, 27 Feb 2021

We’ve had armpit offsides, dodgy lines and even goal-line technology failing in the Premier League over the past year but what unfolded at the Hawthorns was a cacophony of chaos like nothing we have seen before. Referee Lee Mason was at the centre of the drama as he disallowed what would have been an important Brighton equaliser as the Seagulls lost the crucial game 1-0.

With the Baggies one goal ahead thanks to a Kyle Bartley header, after Brighton had missed one of two penalties in the game, the visitors pressed for an equaliser and were awarded a free-kick on the edge of the box. As West Brom goalkeeper Sam Johnstone lined up the wall with his near post, Mason blew his whistle and Lewis Dunk passed the ball into the open net. As the ball crossed the line, Mason blew his whistle again as if to stop play.

The Brighton players were incensed as initially Mason had ruled the goal out, despite a clear whistle being heard before Dunk struck the ball into the net. Then, it was the West Brom players enraged as he changed his mind and awarded the goal and it looked as if Brighton had scored an all important equaliser as the players went back to the half-way line.

Then, he was told by VAR to consult the screen, but as he went to do so, the decision appeared on screen ‘NO GOAL’. Mason, after checking the screen, ruled the goal out for the second time and ruled the free-kick to be retaken. Nobody in or out of the stadium had a clue what was going on and Mason lost control of the game, changing his decision at the flip of a coin. 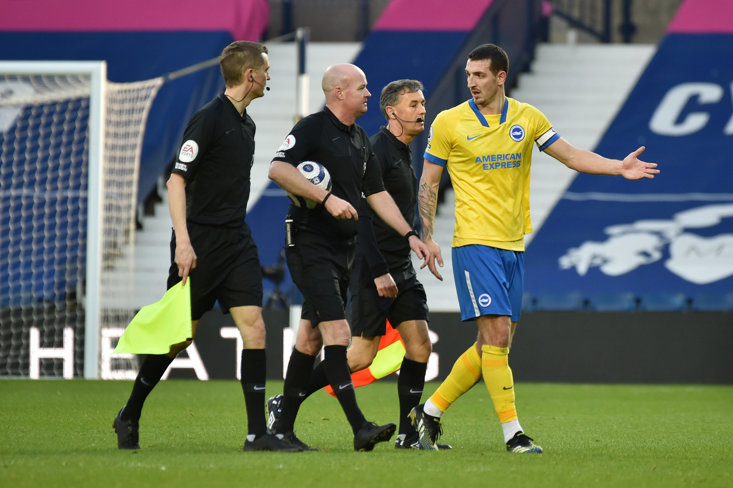 For VAR to have any chance of success in the Premier League, we must be able to hear the referees as they make decisions such as this one. If Mason would have been able to explain his thought process, before consulting the monitor, it would have made a whole lot more sense for all involved, even though it appears at first look like the officials have come to the wrong conclusion.

In the two other big sporting events happening this month, the Six Nations and the India v England Test, we are able to see and hear everything the officials discuss and can see how they come to every single decision. As spectators, we may not agree with their final decision but at least we then understand the thought process behind it.

Another benefit, although it would take some getting used to is clearing up the foul language of some of the players. Brighton surrounded the referee, and West Brom did the same, once it became clear he was being swayed by them on the pitch. Having access to the refs microphone would soon stop all of that and give the referee more respect from players, fans and pundits alike.

For too long poor decisions by officials have been brushed underneath the carpet, and they have remained silent both on the pitch and in post-match interviews. It is time to open up the dialogue, and start treating referees like humans rather than robots. Mistakes are inevitable, but we must give the officials a chance to explain how they reached their final decision.