Football
News
The winner of the BBC award will be decided by a public vote and announced on 24 March
Simon Lillicrap
15:32, 12 Feb 2020

The shortlist for the BBC’s Women’s Footballer of the Year has been revealed. After a simply stunning year for women’s football where attendances have skyrocketed and interest in the sport has peaked, these are the top five players in the world.

For English football fans, the shining light of women’s football has been nominated for the award. After a stellar 2019, in which Bronze helped the Lionesses reached the semi-finals of the World Cup and win the SheBelieves Cup, the best right-back in the world took her game to the next level.

She was voted the second-best player at the World Cup and came second in the Ballon d’Or Feminine but will be looking to go one better this time around. Her club form has been simply sensational and she was a key part of the dominant Lyon side that won the treble, including the precious Champions League. Club form does not come any more dominant than that.

For her club, the 34-year-old helped her side reach the play-offs before they lost in the semi-finals. She certainly could not have the same impact for her club as she did for her country. Having said that, she produced her best football for the biggest stage in football and went home with the World Cup.

Arsenal forward Miedema is simply a goal machine. In 2018-19 she scored 31 goals in 28 games for her club and in the 2019-20 season she is currently on 27 goals across 22 games in all competitions. The most lethal goalscorer in the women’s game won the Golden Boot as she fired the Gunners to the Super League title and she is currently leading both the goals and assists charts in England’s top division this season.

For her country, the PFA Players’ Player of the Year could not quite win the big prize but she did lead her team to the World Cup final and became her country’s all-time leading scorer along the way. She would certainly be a deserving winner of this award. 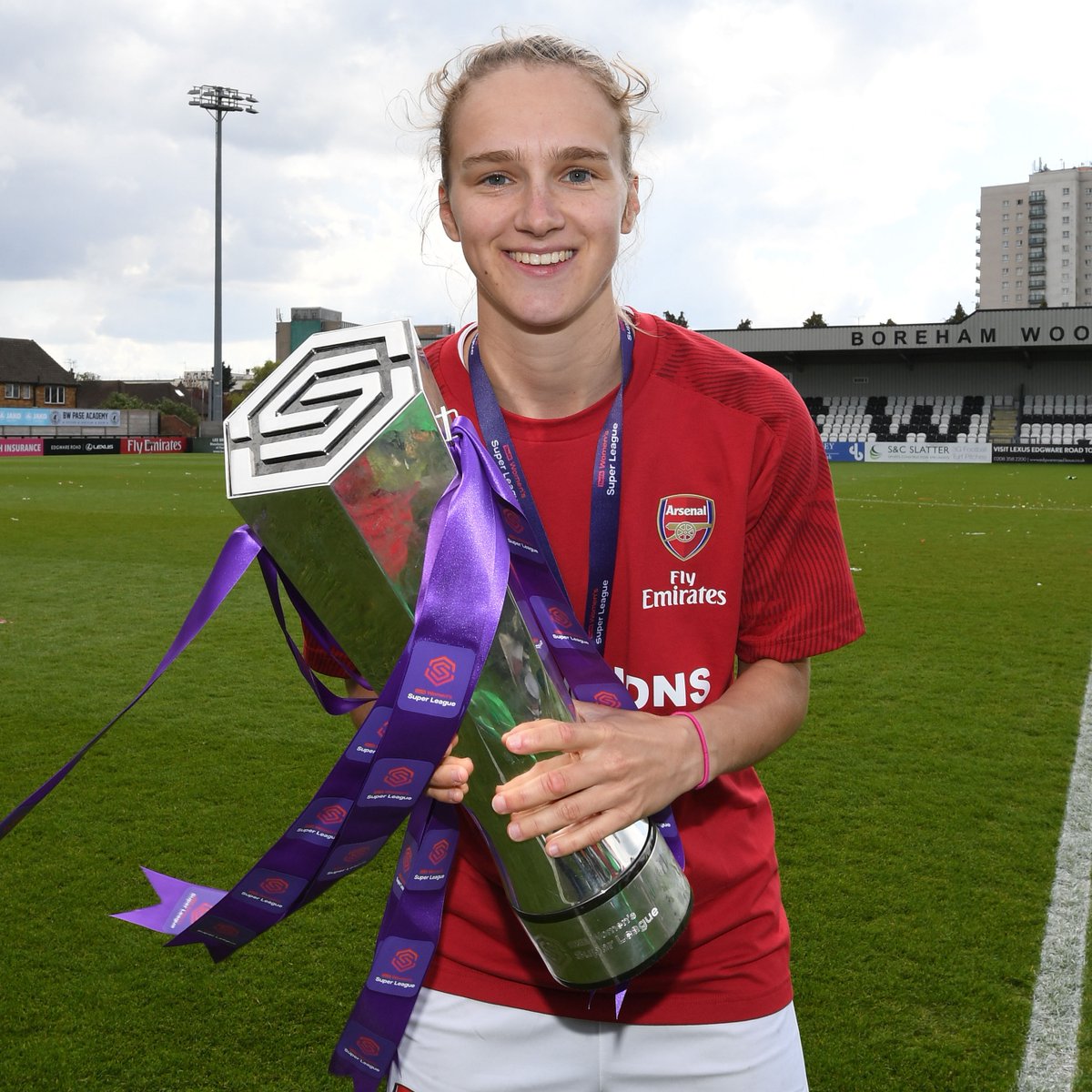 Another World Cup winner who was touted as the unsung hero of that USA side, she is finally flourishing in her new midfield role. She was named US Soccer’s Female Player of the Year, perhaps surprisingly given the fierce competition, but that is testament to her ability.

The 27-year-old also helped her Chicago Red Stars side finish second, before losing to North Carolina Courage in the play-off final. She is a player who does not get on the scoresheet or grab the headlines too often, but with 88 caps to her name she is consistent and deserves to be nominated for this award.

Australia’s star Sam Kerr has only been in England for a couple of months but she has already made a big impression on her Chelsea teammates. In 2019 she managed to finish as top scorer in two domestic leagues, scoring 13 times in the Australian W-League before hitting 18 goals for the Chicago Red Stars.

Another goal machine, she scored a hat-trick at the World Cup (Australia’s first) and hit five goals across the entire tournament. Another stellar year for Kerr awaits and we can’t wait for her to start finding the net for her new club.

Westfield Matildas
@TheMatildas
.@samkerr1 sets up @hayleyraso for a stunning finish! ðŸ”¥
ðŸŽ¥: @FoxFootball #THAvAUS #WeAreMatildas
56
677
x
Suggested Searches:
Tyson Fury
Manchester United
Marcus Rashford
Lewis Hamilton
F1
Air Jordan
More
football
The Star-Studded Harry Redknapp Podcast Hoping To Raise The...
Get the jam roly polys out of the oven, wind your window down and let all and sundry know that there [ ... ]
football
Get A Core Like CR7 With Two Of Cristiano Ronaldo’s Quick-Hit...
As the winner of 30 major trophies, five Ballon d’Ors and someone who is widely recognised as [ ... ]
football
Finally! The Definitive Book Separating Fact From Fiction In...
The branches of the great royal oak that is football are endless. A continuous weaving narrative, rich [ ... ]
football
British Football’s Greatest Grounds, The Book Celebrating Every...
Great Britain no longer predominantly finds its religion in churches and cathedrals. It’s more [ ... ]
football
Cracking Christmas Gift Ideas For The Fanatical Football Fan...
The footy-mad person you’re buying for this Christmas has probably been kitted out since the summer, [ ... ]
football
Stocking Filler! Believe Us: How Klopp Transformed Liverpool...
Few journalists have followed Liverpool so fervently and passionately over the past several years as [ ... ]
football
With A Wealth Of Talent, The Players Podcast Flips The Script...
A collaboration between BBC Sport and Copa90? Yes please! Totally devoted to the ever burgeoning, ever [ ... ]
football
Jose Mourinho And Mikel Arteta Playing On Reputations Ahead...
It’s fair to say that the reputations of Tottenham boss Jose Mourinho and Arsenal manager Mikel [ ... ]
football
Gareth Southgate Looks To Inspire Next Generation Of Footballers...
There was a time. A most glorious time. Smiling faces congregated closely together in large, open spaces. [ ... ]
football
Andy Cole Shoots From The Hip In His No Holds Barred Autobiography,...
There may be a plethora of sports books being released this winter ahead of the festive season, but [ ... ]
football
Jamie Carragher’s Greatest Games Is The Book Football Fanatics...
Over the past seven years through his stellar television punditry work, one-club man Jamie Carragher [ ... ]
football
The Opportunities Given To Players By Southgate Is Paying Dividends...
Ok, so the Republic of Ireland didn’t lay a glove on them. But England’s performance in [ ... ]
football
Gomez Injury Latest Reminder Football's Eating Itself Whole...
Just when Liverpool thought their defensive crisis couldn’t get any worse, along came the news [ ... ]
football
The New adidas Podcast Putting Premier League Players Through...
Aiming to put some of the fastest players in football through their paces, host Ben Haines has recruited [ ... ]
football
Jurgen Klopp Has To Pick Jota Over Firmino And Not Just Because...
“Football is a simple game made complicated by people who should know better.” Fine words, [ ... ]
football
Goals And Punctures! The Biking Passion And YouTube Vids Of...
The general consensus, whether rightly or wrongly, is that footballers are all about the beautiful game. [ ... ]
football
Schoolboy Defending Leaves Man Utd And Solskjaer Facing The...
It happened again. It keeps happening. Manchester United came up against a well-drilled opposition who [ ... ]
football
Jurgen Klopp's Ruthlessness Has Allowed Diogo Jota To Become...
He’d netted goals in Liverpool’s previous three fixtures, including second-half winners [ ... ]
football
The Fascinating Book That Lifts The Lid On Brazil's Glorious...
“If we had won that game, football would have been different. That defeat for Brazil was not beneficial [ ... ]
football
Covid Can't Stop Ronaldo, Five More Weekend Sport Stories You...
Cristiano Ronaldo is still brilliant, Mercedes are still untouchable and Manchester City are still FA [ ... ]
football
Man United vs Arsenal's Narrative Has Changed But The Fixture...
Manchester United versus Arsenal. You read the fixture and what do you think of? Roy Keane and Patrick [ ... ]
football
Marcus Rashford Captured Our Imagination, He’s Sports Personality...
There’s a storm a brewin’. A Sports Personality of the Year size storm. It might seem like [ ... ]
football
‘The Red Apprentice’ Explores Solskjaer’s Surprising Path To...
To many, Ole Gunnar Solskjaer was a shock choice to relieve Jose Mourinho as manager of Manchester United, [ ... ]
football
Dazzling In Europe Again, But It's Time For Man Utd To Up Their...
In many ways it was a typical Manchester United win under Ole Gunnar Solskjaer, and yet it was also [ ... ]
football
Liverpool Need To Show What They're Made Of During Injury Crisis
Now we’re really going to find out what the Premier League champions are made of. Liverpool’s [ ... ]
football
Enjoy It While You Can - Messi Exit Will Mark The End Of A Clasico...
It has been the centre of the European sporting calendar for the last couple of decades. El Clasico, [ ... ]
football
A Tale Of Two Windows: Chelsea Could Leave Man United In The...
New goalkeeper, check. Commanding, experienced centre-back, check. Attacking quality, check. Chelsea [ ... ]
football
Dion Dublin’s Gaffer Tapes, The Podcast Taking You Inside The...
A good podcast will be a good friend. Whether you’re on a winter run, doing the weekly shop, or [ ... ]
football
Why Raheem Sterling Is Right To Call Out Social Media Over Racist...
“I don't know how many times I need to say this, but football and the social media platforms [ ... ]
football
The Book That Shows Why St Pauli Is A Football Club Like No...
Bayern Munich have won the Bundesliga for the past eight seasons. Borussia Dortmund have been champions [ ... ]