Leverkusen, Germany. “The diamond with the capital B blows on the westerly wind,” read the display from the travelling Borussia Mönchengladbach supporters in south-west corner of the BayArena, amid a sea of green, white and black flags.

A fresh wind had indeed arrived in Leverkusen ahead of the start of the Bundesliga Rückrunde - the second half of the season – but it came from further west than Mönchengladbach.

After the dismissal of Heiko Herrlich, Dutchman Peter Bosz had arrived in the Rhineland promising to lead struggling Bayer Leverkusen back into Europe with the offensive brand of football that saw him get off to such an electric start as Borussia Dortmund coach last season.

"[Bosz] stands for offensive and attractive football," said former Leverkusen midfielder and current sporting director Simon Rolfes at the 55-year-old’s unveiling. "And we have a lot of players who that will suit."

Five of those players all started against the high-flying Foals with German internationals Julian Brandt and Kai Havertz sat behind a front three of Leon Bailey, Karim Bellarabi and Kevin Volland, while Lucas Alario settled for a place on the bench.

It was a typically attacking Bosz line-up and it took only 20 seconds for the Werkself to launch their first assault, but Bellarabi’s cross from the left was hooked away from the lurking Volland.

“Quick combinations and a good passing game – that’s the football that suits Bayer 04,” Rolfes had said. “We want to have the ball, we want to be creative and we want to put opponents under pressure.”

And Leverkusen did have the ball – over 70 per cent of it in the opening stages – but they weren’t particularly creative and they didn’t put the visitors under a great deal of pressure.

“We’ve been well warned about the way Peter Bosz likes to play football,” Gladbach defender Matthias Ginter had said pre-match. “It will be a big challenge for us.”

It was a challenge that he and his teammates rose to. Sat in a disciplined 4-5-1 without the ball, Gladbach were happy to concede possession and let Leverkusen shoot from distance, with Brandt, Havertz and Bailey all trying in vain.

“We sat deep on purpose,” said Gladbach manager Dieter Hecking post-match. “We didn’t want to give them room or let them counter-attack.”

But Hecking’s men aren’t third in the Bundesliga by accident; the Foals boast considerable firepower of their own, as they demonstrated when Alassane Plea fired them into the lead with their first shot on goal ten minutes before the break, arrowing a first-time effort into the bottom corner. 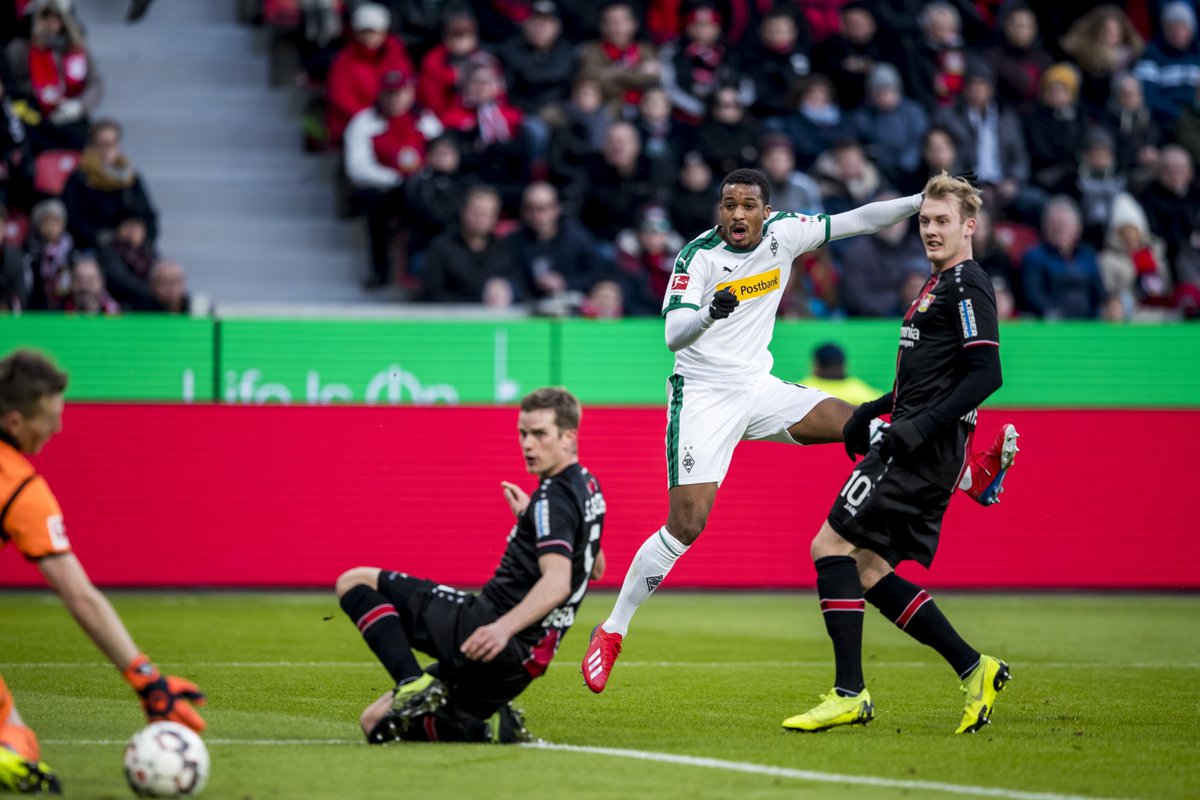 “He’s been absolutely clinical in training over the past few days,” said captain Lars Stindl, who helped set up the goal with a neat turn and pass on the edge of the box. “We were all hoping he’d be able to replicate that today and he did it brilliantly.”

Sporting director Rolfes had bemoaned Leverkusen’s inability to “control the game with the ball” under Heiko Herrlich and had demanded “footballing solutions to different situations.”

That’s the challenge that Bosz has been set at the BayArena and he responded in the only way he knows how: more attack. Havertz and Brandt pushed even further forward, Bellarabi switched to the right and Alario replaced the ineffective Bailey.

It almost worked. Two half-hearted penalty claims were rightly dismissed, Bellarabi struck the post and Yann Sommer saved twice from Havertz, first from a close-range stab at goal from a corner and then from a header after the teenager arrived late in the box.

Fine margins that, on another day, might have gone Leverkusen’s way - although Gladbach also wasted a golden opportunity to make the points secure when Jonas Hofmann dragged his shot wide at the end of a flowing Gladbach counter-attack which exploited Leverkusen’s high line, contradicting Bosz’s claim that he has “learnt from the mistakes [he] made in Dortmund.”

“We really stepped it up in the second half and put Gladbach under pressure,” said Bosz, insisting that his team is “on the right path” and promising to play “even more offensively – absolutely.”

The westerly winds are sweeping through Leverkusen but Bosz is refusing to be blown off course.

Bayer 04 Leverkusen
@bayer04_en
🗣 Bosz: "We're disappointed with the loss! We had good chances in the second half, but Gladbach were more effective than we were. Maybe we were also missing a bit of luck...for example, with Bellarabi's shot hitting the post. It's a shame. There was more in it."
#B04BMG | 0-1 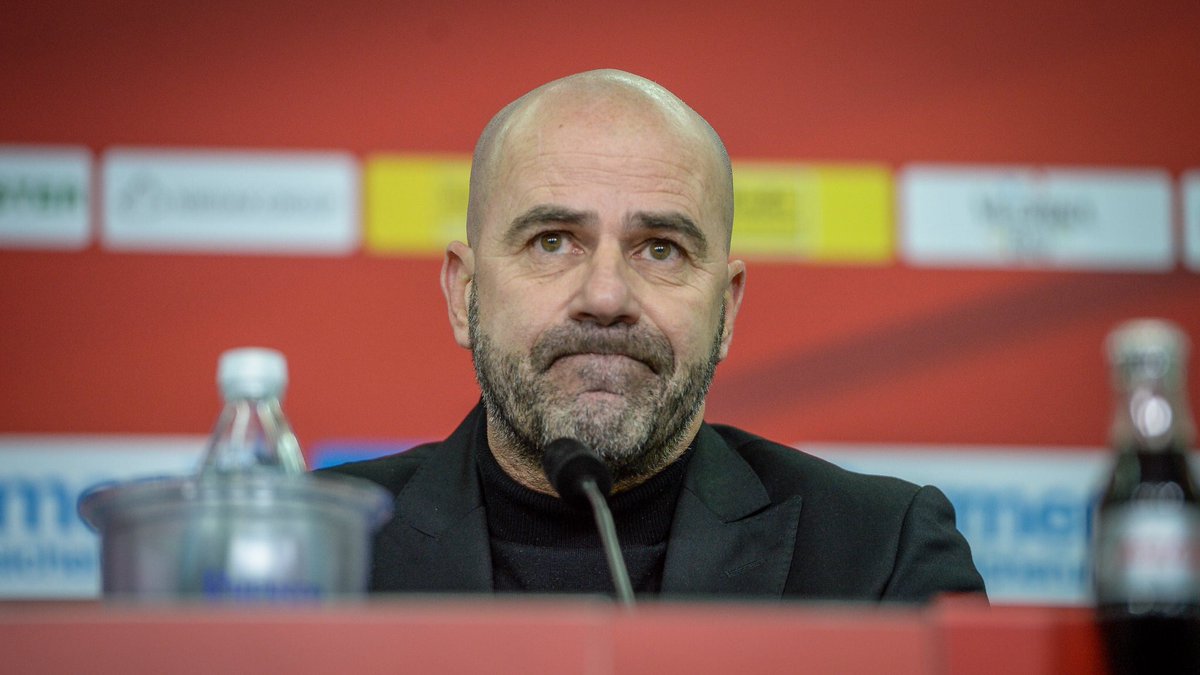 1
19
More
football
The Secret Behind The Success Of Lineker, Shearer And Wright's...
The unavoidable hiatus to the broadcast of the BBC’s flagship football programme will not deny [ ... ]
football
Neymar Jr... Junior! Santos Like The Look Of Ronaldo-Imitating...
On March 7 2009, a slightly-built 17-year-old from Mogi das Cruzes, São Paulo, walked out onto [ ... ]
football
Business As Usual: A Beginners Guide To The Belarus Premier...
If you’re going out of your mind without your football fix, well we’re sorry you just haven’t [ ... ]
football
Why June 30 Could Be D-Day For The Fate Of Premier League Season
England captain Harry Kane has added his voice to the growing calls for the Premier League season to [ ... ]
football
You Heard It Here First - Brescia's Sandro Tonali Is Italy's...
Since winning the World Cup in 2006, it has been turbulent time on the international stage for Italy. [ ... ]
football
A Reunion With Ancelotti Could Resurrect Rodriguez's Stuttering...
No club chews up and spits out world class players quite like Real Madrid. Yet, their sense of entitlement, [ ... ]
football
'Quickly Kevin' Is The 90s Football Nostalgia Podcast To Beat...
While the majority of sports podcasts scramble to fill the minutes within the disruption of the [ ... ]
football
Where Did It All Go Wrong For Phil Neville And The Lionesses?
Winning, Phil Neville recently said at the SheBelieves Cup, is what would bring England’s women [ ... ]
football
''Drop A Few Hand Grenades'' Keegan's Advice To Scholesy The...
A packed out Wembley roared like one of those indomitable Three Lions to greet England’s new messiah. [ ... ]
football
Rise Of The Couch Coach: Coronavirus Causes 119% Surge In Football...
Thousands of us are flocking to virtual reality and gaming to help fill the void of no live football, [ ... ]
football
Review: Diego Maradona - Drop Yourself Into The Great's Chaotic...
When Diego Armando Maradona arrived at Napoli in 1984 for a world-record fee, the entire city ground [ ... ]
football
Arsenal's Tough Choice - Is Donyell Malen The Ying To Aubameyang?
Arsenal’s inability to manage the contractual situations of their biggest stars has plagued them [ ... ]
football
Robbie Fowler Is Making His Mark As A Manager With Brisbane...
The curtains came down on one of the last bastions of football standing in 2020 this week. Before the [ ... ]
football
Long Live The King: Eric Will Always Be Manchester United's...
“If ever there was one player, anywhere in the world, that was made for Manchester United, it [ ... ]
football
I Was There - The Day Football Came Home To Wembley
The closest I ever got to attending the original Wembley Stadium was on its final day in operation in [ ... ]
football
'Sunderland Til I Die' Heads To The Boardroom In Netflix's Second...
The docks have been left deserted. The wealth has dried up. Wearside has become an impoverished place [ ... ]
football
How Chief Creator Silva Became New Face Of Premier League
Football has been cast into uncertainty by the coronavirus pandemic. As it stands, nobody is sure if [ ... ]
football
Lookback:Chelsea 6-0 Arsenal When Arsene's 1000th Game Went...
It was supposed to be an occasion to celebrate for Arsene Wenger, but his 1000th game in charge of Arsenal [ ... ]
football
Ronaldo, Kane, Hazard - The Winners And Losers Of Euro 2020...
So as of this week Euro 2020 became Euro 2021. Another casualty of the global Coronavirus epidemic. [ ... ]
football
Time To Act And Move The Premier League Transfer Window
When my husband had an ear infection, I used my medical knowledge to help him. I said the best thing [ ... ]
football
Southgate Shows Strong Leadership With Rallying Cry To Fans
England head coach Gareth Southgate has sent a rousing message to national team fans as football continues [ ... ]
football
Lookback:Spurs And Chelsea's Eight Goal Thriller
In the three full seasons of Jose Mourinho’s first spell as the club’s manager, Chelsea [ ... ]
football
Take Your Pick - The Premier League Season Ending Scenarios
There are far more pressing concerns than football at the moment, as Jurgen Klopp so eloquently pointed [ ... ]
football
Premier League Clubs Must Be Less Karren And More Klopp Right...
We all know a Karen, don’t we. The proverbial I need to speak to the manager type, and while most [ ... ]
football
PSG Will Never Win Big If They Continue To Be Mentality Midgets
These days, everyone is in need of a laugh, so if you’re not aware of the @NoContextHearn account [ ... ]
football
Blackpool, Video Games And Escapes - How Footballers Have Dealt...
That date of April 3 for the Premier League to resume is looking increasingly optimistic day to day.  [ ... ]
football
Here Are The Meetings That Will Shape A Pivotal Week In The...
Coronavirus has completely destroyed the sporting calendar and led to most events being either completely [ ... ]
football
Elbow Bump! Leyton Orient Are Using FIFA 20 To Bring The Football...
With almost all football suspended for the next few weeks and with boredom already creeping in, one [ ... ]
football
Premier League Hall Of Fame Event Cancelled Due To Covid-19...
The Premier League’s first two inductions into a new Hall of Fame are set to be postponed after [ ... ]
football
Sancho’s Time At Dortmund Made Him A Pioneer - Jude Bellingham...
Results haven’t shown it, and there are fair questions surrounding his tactical approach and leadership, [ ... ]
This website uses cookies
Cookies help us and our partners provide statistics. By browsing this website, you consent to the use of cookies in accordance with our Privacy Policy and Cookies Policy.
Accept & Close