It is the trophy missing from his collection. Lionel Messi came within a whisker of winning the World Cup back in 2014, but after a period of international disappointment, Argentina look like serious contenders once again. Their 3-0 win over Uruguay featured Messi’s 80th international goal and kept their unbeaten record in the notoriously difficult South American World Cup qualifying group intact as all eyes turn to Qatar.

For many, Messi’s best chance to win the biggest competition in world football came in 2014 when he was near his peak, but he seems reborn in this new era of players who have gelled under Lionel Scaloni. The now manager was assistant under Jorge Sampaoli when La Albiceleste were beaten in Russia 2018 by eventual champions France, and he seems to have taken the side to the next level under his leadership.

First and foremost he has managed to address their most obvious issues. The top-heavy squad packed full of world class talent could not get the balance right when it came to defence and midfield. There was a lack of quality behind them and Messi, Sergio Aguero, Gonzalo Higuain and Angel di Maria were unable to function as a foursome.

Now those issues have been addressed and Argentina have only conceded six goals in their 10 qualifying matches for Qatar 2022. In Aston Villa’s Emiliano Martinez they now have a top-class goalkeeper who is playing week-in week-out in the Premier League, and he is so important in giving confidence to those in front of him. Sergio Romero was never a regular for Manchester United and Martinez is a massive upgrade on Franco Armani, who was in between the sticks in Russia.

Marcos Rojo and Martin Demichelis were both steady contributors to Argentina’s defence over the years but they each had their limitations, while Nicolas Otamendi is still providing a great level of experience amongst younger defenders. The standout progressor of the ball from the back four is Tottenham Hotspur’s Cristian Romero, who at 23-years-old has a huge amount of talent and is flourishing in the sky blue and white stripes. 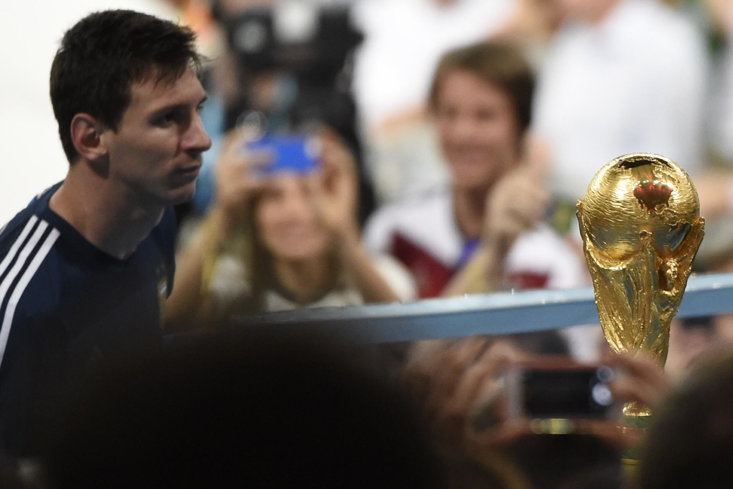 In front of that pairing, Rodrigo De Paul is now at his peak and, having moved to Atletico Madrid this summer, should improve further under Diego Simeone. He has been paired recently with Paris Saint-Germain’s Leandro Paredes, who is also 27 and now has the added bonus of training and playing with Messi every week for his club.

Those two have been integral to the team’s improved performances while there has also been a resurgence for another Spurs man, Giovanni Lo Celso. His hard work from wide positions is crucial to the way this side play, and he has the quality to deliver in the final third.

But the main reason why Argentina have been successful is because they’ve got the best out of their number 10. Playing in a free role behind the striker, as he did back in 2014, Messi is just allowed to do what he does. He has also struck up a fruitful partnership with La Albiceleste’s first-choice striker, Lautaro Martinez. He's next on the list of world-class forwards that this country has produced, with 16 goals in 32 international appearances at the age of 24.

The Inter Milan hotshot is flourishing once again, and his partnership with Messi looks to be better than the ones the former Barcelona man struck up with Gonzalo Higuain and Sergio Aguero.

This Argentina team has already proven that it can win tournaments, as Scaloni ended a wait of 28 years for a trophy with Copa America success this summer. Messi had tears in his eyes when he lifted his first international prize but there could be more to come. This team is packed full of players who are either at their peak or just about to reach it, and, with Messi at the heart of it, they can achieve anything.

Argentina are 11/1 to win the World Cup with Betfred