Harry Kane warned us. He said he was ‘ready to peak’ in the knockout stages after failing to score in open play in the knockouts at the 2018 World Cup, and after his brace against Ukraine in a 4-0 win in Rome on Saturday, he is just two goals off the top scorer at Euro 2020.

Having won the Golden Boot at the World Cup with six goals, it now seems like Kane is making it count when it really matters for England at Euro 2020, after a bucketload of abuse came his way during the group stages. His first was provided by Raheem Sterling as England started where they left off against Germany on Tuesday. The Manchester City man threaded a perfect ball through the defence to the England captain, who got his toe to the ball ahead of the Ukranian goalkeeper.

This was the world class Kane we know, fresh from his strike against Germany he was lethal in front of goal. Ukraine boss Andriy Shevchenko switched to a 4-3-3 and matched up England as Jadon Sancho impressed in the first half of his first start at Euro 2020. Twinkle toes saw him past a few Ukraine players as England pushed for a second, but this was all about Kane.

The half-time break seemed to reinvigorate England as the captain won a free-kick from kick-off and Luke Shaw delivered the perfect ball for Harry Maguire to head home. Made in Manchester, Maguire rose like it was 2018 all over again. This was England’s first goal from a set piece this tournament, but it wouldn’t be their last. 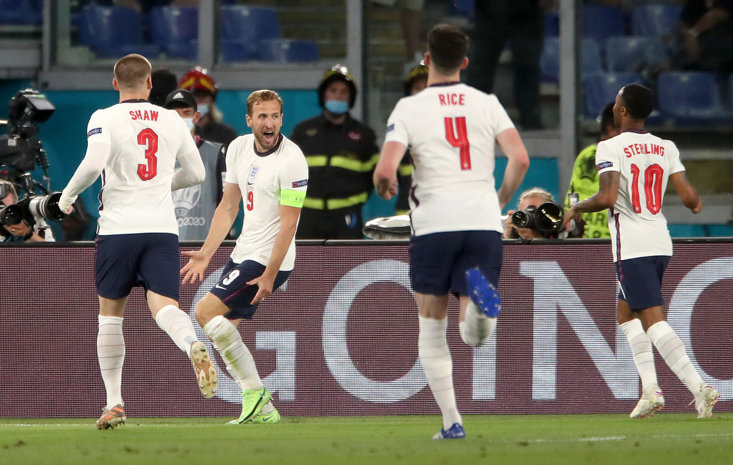 Kane had his second moments later as he rose highest to nod home a Shaw cross after another brilliant England move, as Gareth Southgate’s team talk worked a dream. The captain seemed like a man on a mission and was only denied his hat-trick when his fierce left-footed volley from the edge of the box was tipped wide by Heorhiy Bushchan.

The criticism aimed at Kane was misplaced, but there was never any doubt in the manager’s mind that the number nine was his main man. He is likely to end his career as England’s highest-ever goalscorer, and now he is doing it when it really matters - in the knockout stage of a major tournament.

The commanding lead even gave England a chance to rotate those players who had been booked. Jude Bellingham, Marcus Rashford and Jordan Henderson came on, with the Liverpool skipper nodding in his first ever England goal from a Mason Mount corner to put the tie beyond doubt.

But the biggest round of applause from the England bench came as Kane was withdrawn. Dominic Calvert-Lewin came on in his place as the captain was praised by the staff and his teammates. The belief has never wavered when it comes to the captain. He is England’s best goalscorer and the main man who Southgate has always been able to rely on. The group stages were won by the defence, but now England’s attack are starting to flex their muscles - although it must be said that the Three Lions kept yet another clean sheet, their fifth of the tournament.

So, Southgate’s side head back to Wembley with a semi-final against Denmark to look forward to. 60,000 fans await at Wembley and will be hoping to spur their side on to their first final since 1966 - but they now know their main man is firing once again. Harry Kane, who ever doubted him?