Leon Bailey announced himself to the Aston Villa faithful on his home debut, coming on as a substitute and assisting the second before scoring the third as his side walked out 3-0 winners against Everton. The Jamaican international then left as quickly as he had arrived, going down holding his knee and being replaced by Ashley Young. It was an utterly breathtaking 21-minute cameo from the £31.5 million summer signing.

The first half did not produce a goal, but provided fine entertainment nonetheless. Both sides played at a lively pace, and the styles melded to conjure some truly end-to-end stuff. Villa looked to get on the front foot while Rafa Benitez’s men tried to sit deep and hit the hosts on the counter. Salomon Rondon, the Everton debutant, started very brightly. The former West Brom and Newcastle striker collected an Andros Townsend centre and powered it into the side netting, before heading over from the resulting corner.

Everton’s best moments arrived when Benitez’s counter-attacking game-plan began to gel. Demarai Gray received the ball from a failed Villa attack, before making a surging run and flashing a ball across goal. If the former Leicester man had struck the ball with less force, an on-rushing Rondon could have made contact and troubled Emi Martinez’s goal.

Villa’s standout moments largely came at set-pieces. Tyrone Mings forced an incredible point-blank save from Asmir Begovic, deputising for the injured Jordan Pickford, at a corner. Another well-worked dead ball saw a series of headers fall at the feet of Danny Ings, who could not keep his outside-of-the-boot shot down. 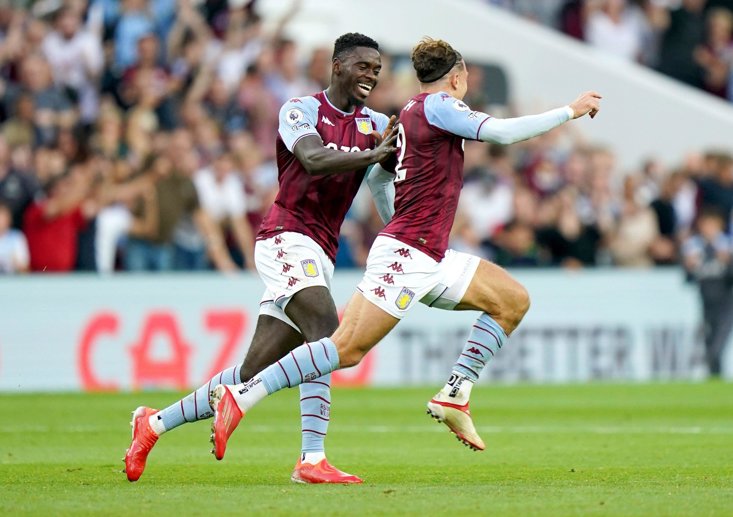 CASH WHEELS AWAY AFTER FIRING VILLA AHEAD

John McGinn had a great first period, Everton unable to contain his impeccably-timed runs out of midfield and into forward positions. Ollie Watkins’ footwork sent Ben Godfrey sliding off the pitch, and he played in the Scotland midfielder who shot just wide. McGinn would later draw a good block from Michael Keane, before Matty Cash sent the rebound just wide. Unfortunately, his afternoon would be cut short when he was substituted for Marvelous Nakamba. The switch was a concussion substitution due to the after-effects McGinn was feeling after an earlier head-clash.

Matty Cash set Aston Villa on their way in the second half, blowing what had been a tight game wide open with a superb strike, his first Villa goal. The full-back had been a constant threat all afternoon, giving Lucas Digne a torrid time down the right flank. The Everton left-back saw his day go from bad to worse when he deflected a Leon Bailey corner past Asmir Begovic and into his own net.

Everton’s defensive organisation had been excellent in the first period, but began to fall apart as Villa continued to pour forward. Jacob Ramsey won the ball in central midfield and powered through Everton’s resistance before dragging his shot wide. If he had played in the advancing Danny Ings, the home side may have led 3-0 sooner. As it was, they did not have to wait long for a third. Ings lifted a superb pass towards the Jamaican with the outside of his boot, and the former Leverkusen man put on the afterburners to glide into the Everton box and lash the ball past Begovic. The ideal way to make a first impression on your home support, only marred slightly with his exit through injury.

After a close first half, with Everton’s counter-attacking style appearing to be a match for Villa’s pressure, Dean Smith’s side stepped up a gear in the second half. The constant attacks down the flanks, the vibrancy of Cash and Bailey, as well as Watkins and the always-dangerous Ings, left Everton chasing shadows. Their fans can cling to the fact Richarlison, Dominic Calvert-Lewin and Pickford will return to the side soon. But it is most unusual to see a Rafa Benitez side capitulate in this way.