Michael Shenton joined one of rugby league’s most exclusive clubs in 2014 when he led his hometown club out at Wembley in a Betfred Challenge Cup Final.

On Saturday, he gets the honour of doing it for a second time as Castleford look to go one better than the defeat against Leeds, and lift the sport's oldest and most famous trophy at the national stadium.

The club has been on quite a journey since that day in 2014, which was their first major final since 1992, winning the League Leaders’ Shield at a canter in 2017, before fluffing their lines at Old Trafford. Shenton, though, insists they have learnt their lessons from those landmark disappointments.

“It feels quite different, I feel that we’re much more prepared for what’s coming this time, with the build-up and the expectation of going to Wembley and preparing a team, but just as excited as before,” he explains.

“You can over think it sometimes and get too caught up in it, so it’s a balance of having the focus and intensity in training and the bits of homework that Powelly might send us, but it’s also about being switched off and not playing the game before it’s been played.”

“When you lose one you understand what it means, and you’re stood on the field watching the winners pick up the trophy, it stays with you for a long time. To be on the other end of it is massive motivation and something that we have spoken about with Daryl leaving.

“Getting to the final in 2014 was kind of the beginning of the era for this team, and it set what we were about as a group of players. We’ve gone on quite a journey over the last eight years with Daryl, and we think we can take this now and go full circle and right some wrongs.”

Stood in between Shenton and lifting the trophy is the only other professional club that he has played for, St Helens, and whilst their dominance in the league in recent years has been juxtaposed by a poor run in Challenge Cup finals, the Castleford captain is under no illusions about the test his former employers will provide. 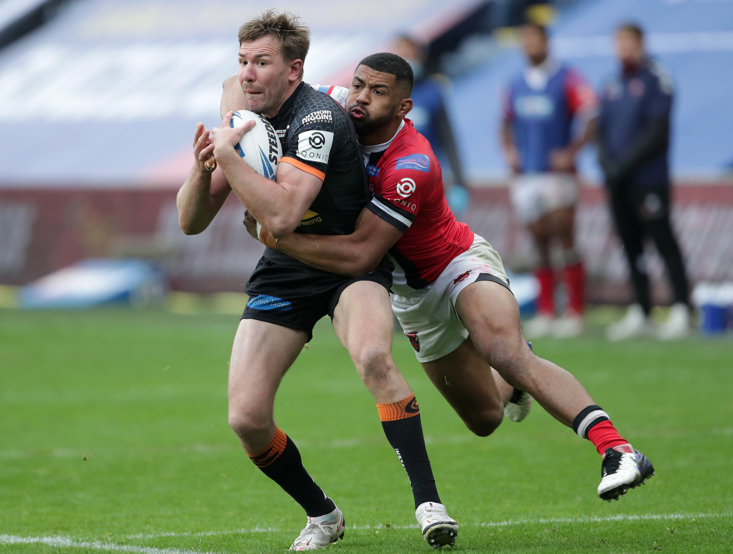 “We know what we’re getting from Saints, they’re the stand out team and have been for three years. They are relentless. It’s hard to pick out an individual player to focus on because they’ve got so much quality across the board. So we just know we’ve got to up our focus on ourselves, and every man on our team has to be outstanding.”

If cup finals weren’t already big enough, this one of course holds the distinction of being held in front of the biggest rugby league crowd in almost two years, with all games since the start of pandemic played in front of no or limited crowds.

That of course will change the dynamic on what could be an emotional afternoon at Wembley, as Tigers fans descend on the capital in hope of their first Challenge Cup final win in 35 years, but Shenton says the backing of fans will be a welcome addition.

“To have a crowd in there is incredibly special, and we know that, we saw the final last year.

To play at Wembley is an honour itself, there is so much tradition and if you win it, it doesn’t matter if there’s a crowd or not, that’s what Leeds will tell you, but to have a crowd in there for us and our families, and have the Cas fans come down after what has been a tough eighteen months is very special.”

Castleford will understandably go into this game as underdogs against a St Helens side who have been the dominant side on this hemisphere in recent years, but with Powell confirming that no Castleford players have fallen foul of Covid protocol, a perfect days weather in the forecast and number of first team players making their return, Tigers fans can be forgiven for thinking that the stars are aligning for their side.