It’s starting to get serious in the Betfred Challenge Cup with the eight remaining teams just two wins away from a place in the final at Wembley.

At this stage of the season, we’ve had a good look the quarter-finalists in the earlier rounds, and of course the Betfred Super League, but history shows that form books count for very little in Rugby League’s oldest and most famous competition.

The current holders Leeds Rhinos, bowed out in the third round to competition favourites St Helens, whilst Salford, Warrington, Wigan and Hull FC all safely negotiated potential banana skins against Championship opposition.

Castleford, Catalans and Huddersfield complete the line up for the quarter finals, which are all available to watch across Sky and BBC this weekend.

The 2018 winners meet the 2019 winners in Friday’s early kick-off as Catalans look avenge their only defeat of the season so far against Warrington.

I was impressed with the way that Catalans responded to that defeat in their following game against Wakefield. The French club have always boasted some fantastic players, but what has been missing over the years is steeliness, and consistency. They’re showing some signs of that this season.

The jewel in their crown has of course been Sam Tomkins so far this term. The England fullback looks like he thoroughly enjoying his football in the south of France and is producing some of the best form of his career.

He’s not the only Dragons player who has impressed though, Gil Dudson has added some real go-forward in the pack, whilst Mike McMeeken also looks like a shrewd signing in the second row.

For Warrington, all the hype around their last game was about Greg Inglis finally making his debut for the club; and those who weren’t able to watch their 50-26 win over Hull KR on OurLeague, this will be the first chance to see him play.

Inglis did get himself on the scoresheet after a slow start, but some of the best performers in the Wire side came further along the backline. Jake Mamo continues to his strong start to the season. He was pushed out to the wing in the absence of Tom Lineham, but he again looked lively with ball in hand.

The halfback partnership of Widdop and Ratchford that worked so well against Catalans the week prior looked very cohesive again at times, although an injury to Matty Ashton could force Price into bringing Blake Austin back into the fold.

Up front, Ben Currie and Mike Cooper both produced dominant performances, they will need to be at their best again to counter the aforementioned Dragons pack.

Prediction: This is probably the tie of the round. Warrington started slowly this season but are starting to show some good form, Catalans have been one of the standout sides from the start, so it’s very difficult to call. I do however think the Dragons have made big strides again this season, and I can see them just edging this. Catalans by 6 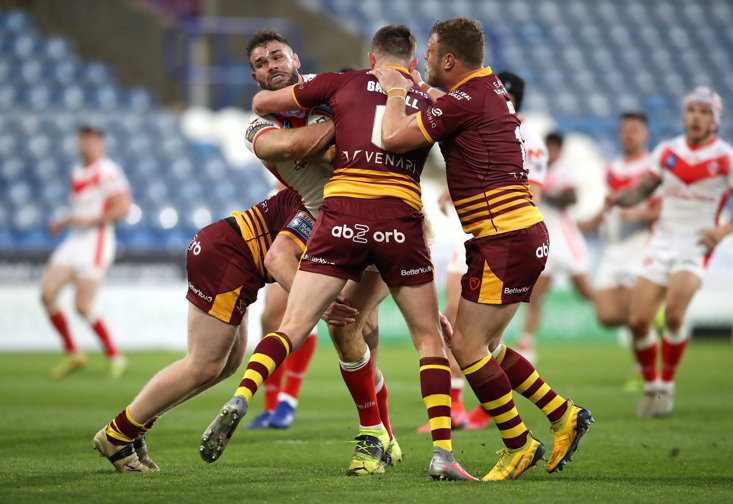 St Helens will go into this game as comfortable favourites against a Huddersfield Giants side that finally picked up their first league win of the season last weekend, but their poor record in the Challenge Cup over the last decade still looms over them.

Saints won three consecutive Challenge Cups from 2006 to 2008, but haven’t lifted the trophy since, only reaching the final once - a surprising stat for a club that has been so dominant in spells during that time.

They’ve once again set the standard so far this season with a string of impressive performances leaving their 100% record intact. The remarkable thing about this current crop of players, is how consistently good their star names have been over the last three years.

The likes of Johnny Lomax, Lachlan Coote and Alex Walmsley very rarely have quiet games, even rarer do they have bad ones. The ray of hope for Huddersfield perhaps, is that when those Saints performances that are below their usual standards come, they seem to come in the Challenge cup.

The Giants have had a stuttering start to life under Ian Watson. The win against Leeds last weekend came as a huge relief for the club as they finally got off the mark in the league.

They had been showing signs of improvement in the build up to that win, including a good performance in defeat to Saints the week before, and now that Aiden Sezer has got a few games under his belt, they will be hoping to put a string of good results together.

Ian Watson of course led Salford to Wembley last season, what a perfect start to his Huddersfield tenure it would be if he could recreate that feat.

Prediction: Huddersfield have made real progress in recent weeks and it looks like Ian Watson is starting to get his message across. I’m not sure it will be enough this weekend though, Saints by 14