Football
News
Saturday is set to be one of the most dramatic days of the football season...
Simon Lillicrap
07:00, 22 May 2021

The Championship play-off semi-finals. After 47 games of effort, just 90 minutes remain before teams can prepare for either the end of the road or a day out at Wembley. With both first legs having finished 1-0, it is all to play for on Saturday as Swansea City, Barnsley, Brentford and Bournemouth all do battle for a place to keep their Premier League dreams alive.

Brentford will be hoping to avoid play-off despair for the second successive season having lost at Wembley last year to rivals Fulham. Despite their moneyball project, this does feel like a ‘Sliding Doors’ moment for the London club. Their squad this year is, on paper, not as strong as last year’s which featured the likes of Ollie Watkins and Said Benrahma and they could once again lose players should they miss out on promotion.

Bournemouth, on the other hand, are looking to make it a hat-trick as, for the first time in history, all three relegated Premier League sides could secure promotion at the first time of asking. The first leg was an entertaining affair, with Jonathan Woodgate’s side doing well to shut out the Championship’s top scorers, as Golden Boot winner Ivan Toney was quiet throughout.

Toney has 31 goals to his name this term and will be key in this second leg if Brentford are to reach the play-off final for the second time in as many years. However, Bournemouth have a star man of their own, the goalscorer from the first leg: Arnaut Danjuma. The Dutch winger has been sensational this term, hitting 15 goals, and the Cherries will be relying on him alongside the attacking talents of Dominic Solanke and David Brooks to breach the Brentford backline once again.

This one is perfectly balanced, with home fans in attendance looking to spur the Bees on to overturn that first-leg deficit. Two of the most exciting attacking sides to watch in the league - Brentford scored a league-high 79 goals and Bournemouth scored 73 - should give us a thrilling and open second leg. There’s a lot on the line and a bucket load of talent on show, so you don’t want to miss this. 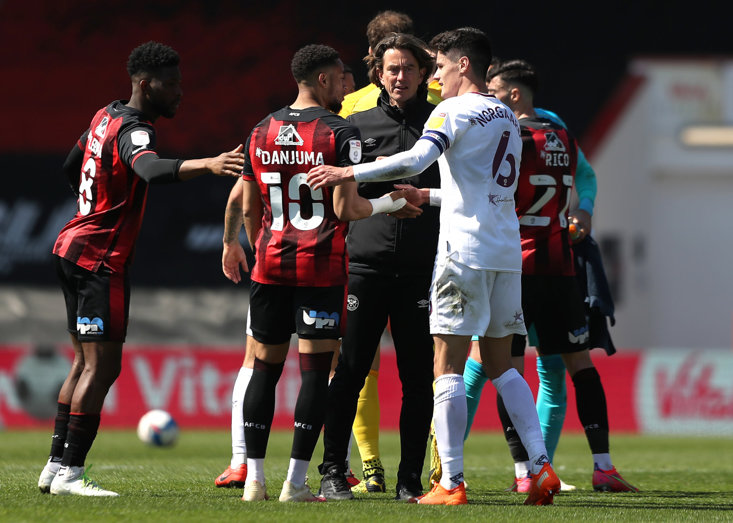 If the other semi-final is all about the attackers, Swansea will be hoping their rock-solid defence can carry them to Wembley. Steve Cooper’s side conceded the fewest goals in the second tier this term, just 39, and it was the young but talented central defensive duo of Marc Guehi and Ben Cabango who managed to stop the Tykes at Oakwell.

Those two are just 20 years of age and have huge futures ahead of them, with Guehi on loan from Chelsea and Cabango tied down to a long-term contract, but both will be hoping to shine in the Premier League next term. Jamal Lowe and Andre Ayew are the main sources of goals, with 31 between them this term, and it was the latter who made the breakthrough in Yorkshire.

For Barnsley, being one goal down could actually suit their playing style. Under Valerien Ismael, they have been the most frantic side in the Championship, with their direct style and intense pressing forcing sides into mistakes. In the first leg, they didn’t quite get going until the second half, but they then seemed to pen Swansea in and create chances.

Now the Tykes know this is all or nothing. The kitchen sink, the taps, the toaster and the bread bin will all be chucked at Cooper’s side in a bid to make an unexpected play-off final, and this is where they are at their most dangerous. With both of these managers in the running to become the new Crystal Palace manager, this could be a battle we see resume in the Premier League next season. For now, all eyes are on Wembley.