The early days of January offer the chance to make incredibly easy, bad jokes. Calling Chelsea’s 2-2 draw with Liverpool “game of the year” might seem like one of those. But it will take something special over the next 363 days for another match to displace it as the Premier League’s best outing of 2022. This intense, fast and technical clash thrilled us for 90 glorious minutes.

The first half was one of the most electrifying 45 minutes of football you are ever likely to see. From the moment Sadio Mane’s elbow made contact with Cesar Azpilicueta’s face in the opening seconds, the crowd never dropped below maximum decibels. Mane was lucky to stay on the pitch, while the rest of us were lucky to be watching it. The action matched the intensity as an unbelievable game played out.

Mane centred for Mohamed Salah on the break, drawing a solid save from Edouard Mendy. At the other end, a Trent Alexander-Arnold pass was blocked by Mason Mount, with the ball finding itself at Christian Pulisic’s feet. The American tried to do too much in the end, and was closed down while trying to round Caoimhin Kelleher.

After providing us with our first flashpoint of the afternoon, it was only appropriate that Mane would open the scoring. Trevoh Chalobah attempted a headed clearance that was misguided, and the Senegal international was given a free run. He succeeded where Pulisic failed, taking the ball around Mendy to put Liverpool in front. Manager Jurgen Klopp, watching from home due to a positive COVID-19 test, must have celebrated Mane breaking a nine-game scoring drought.

Klopp’s side, led by Pep Lijnders in his absence, looked like they might run away with the game when Salah doubled their lead. Alexander-Arnold played a superb ball down the flank to the Egyptian, who stood up Marcos Alonso before tucking the ball inside Mendy’s near-post. It was a majestic moment typical of Salah’s rich vein of form.

Sky Sports Premier League
@SkySportsPL
The best in the world...🌍
Mohamed Salah does it again as #LFC extend their lead against Chelsea! 🔴 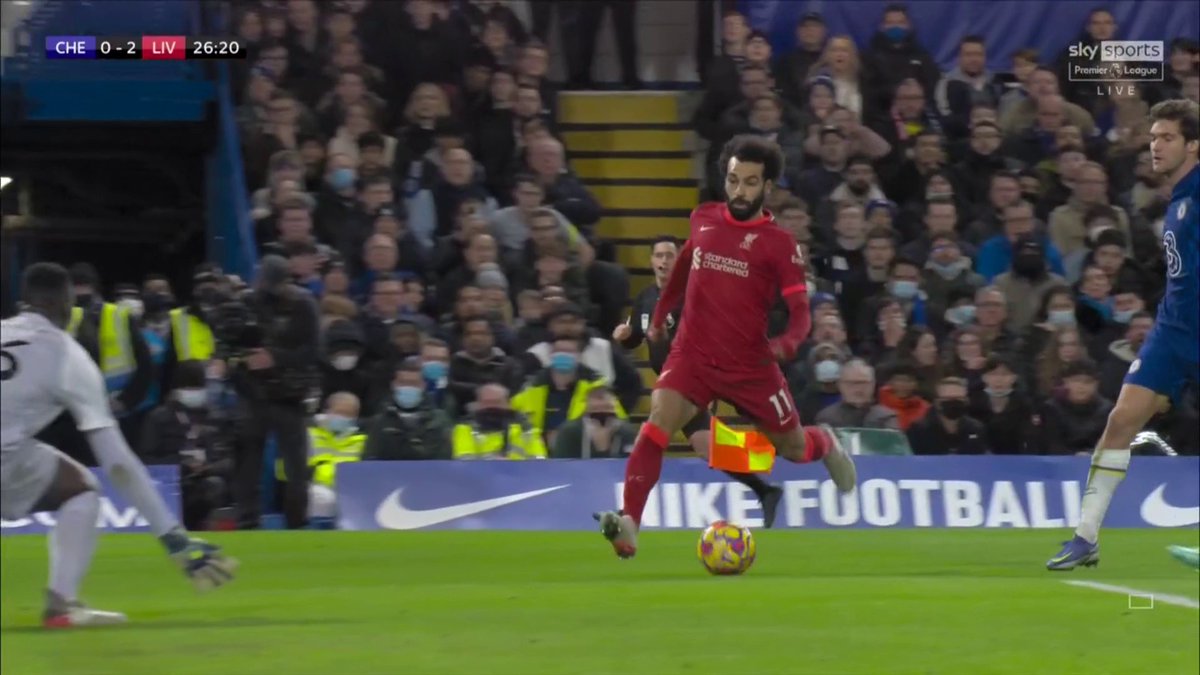 Mason Mount sweated through a VAR check for a potential kick-out at a grounded Kostas Tsimikas. No foul was given, and the white-knuckle ride of a game continued. Kelleher punched out a free kick, only to see the ball arc towards Mateo Kovacic, who hit a sumptuous volley past him into the Liverpool net. The 2022 Puskas Award has its first serious entrant with this strike.

Romelu Lukaku was dropped by Thomas Tuchel for his comments about wanting to leave the club this week, but the man deputising for him drew Chelsea level. Pulisic rebounded from his earlier misses to send Stamford Bridge, into raptures. Antonio Rudiger won the ball in midfield and triggered the breakaway, before N’Golo Kante’s dinked ball gave Pulisic space to run into the box and hammer the ball into the top corner. It was a brilliantly effective transition from Chelsea, and sent a classic game into the break two apiece.

The drama continued in the second half, with Mohamed Salah attempting an audacious long-range shot after spotting Mendy slightly off his line. The Senegal international pulled off a scarcely-believable save to prevent Salah notching his brace, diving athletically to claw the ball away. Mendy was called into action once more, by his international teammate Mane, soon after. Once again Mendy proved why he is considered one of the world’s finest stoppers, making the save look easy.

At the other end, young Kelleher also distinguished himself with a close-range reaction save from a Pulisic half-volley. Tsimikas then pulled a shot just wide as the end-to-end nature of this atmospheric and exciting game continued.

The crowd was electric every step of the way, and one wonders whether the safe standing initiative introduced today helped with the noise levels. The crowd never let up, and neither did the action, almost as if each were feeding off each other in an intense example of cause and effect.

The game got the result it deserved in the end too, with the teams leaving the pitch level. The result helps neither in closing the widening chasm between them and leaders Manchester City, but it would have been desperately unfair for one of these teams to lose. If the fight Chelsea and Liverpool showed today is anything to go by, the title race is not done and dusted just yet.