In the battle between third and fourth and last weekend’s FA Cup finalists, it was sweet revenge for Chelsea who beat Leicester City 2-1 to leapfrog the Foxes in the Premier League table.

The result means that Chelsea have a firm grip on a place in the top four, while Leicester will now be sweating on Liverpool, who have a game in hand against Burnley tomorrow night, heading into the final round of fixtures this weekend.

The outcome of this match was monumental in both side’s battle for a Champions League place and the pulsating atmosphere around Stamford Bridge, thanks to its returning fans, certainly lived up to the spectacle. Thomas Tuchel’s men started like a house on fire and dominated a lacklustre Leicester for large parts of the game. The Foxes threatened to snatch a point late on but Chelsea more than deserved the three points on the balance of things.

VAR was once again public enemy number one when Timo Werner, who’d already had a goal denied by the offside flag and a penalty shout waved away, appeared to have put the home side in front. The German bundled the ball over the line but, like in the dying moments of the weekend’s final, their elation was short-lived when replays showed the ball had hit the forward’s hand and was swiftly ruled out.

Chelsea finally got their deserved breakthrough minutes into the second-half through Antonio Rüdiger. Ben Chilwell's corner skimmed the top of Vardy's head and Rudiger timed his run to perfection to bundle the ball over the line at the back post - this one would count. 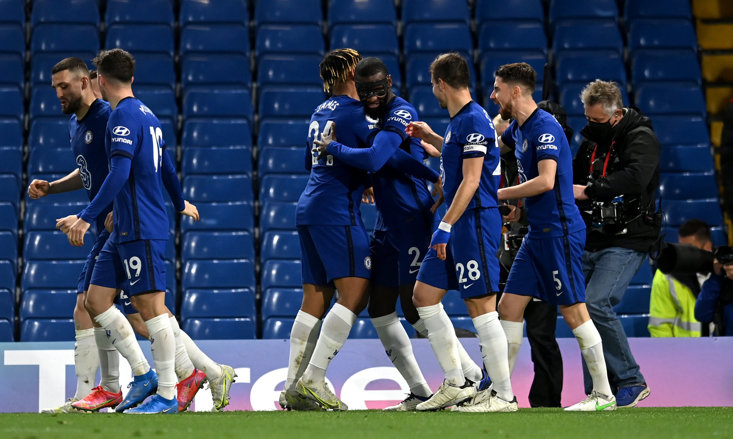 The Blues, now firmly on the front foot, doubled their lead from the spot after Werner was brought down under pressure in the Leicester box. Jorginho duly converted, sending Kasper Schmeichel the wrong way.

The spark was lacking a little from Brendan Rodgers’ men tonight and there were signs of a hangover after clinching the club’s first ever FA Cup at the weekend but, out of nowhere, the Foxes dragged themselves back into the tie through Kelechi Iheanacho on the 76th. Chelsea sloppily gave away possession in their own final third and Iheanacho, who was in acres of space, slid a cool finish into the corner beyond Edouard Mendy. Fun fact - the Nigerian is the first player in Premier League history to score on all seven days of the week in a single season.

After their goal, Leicester showed glimpses of the side that had edged Chelsea at Wembley just a few days ago, but were unable to drag themselves back into the game and claim what would have been a crucial point. Perhaps a sign of a rivalry blooming between these two sides, in the last few minutes the Leicester technical area descended into handbags after a heavy challenge on Chillwell resulted in players and staff from both teams having to be pulled apart.

Despite the crucial win, Tuchel is adamant that the job isn't done yet, telling Sky Sports, "The fans made a huge difference. You see the speed in our game, the hunger, the ambition. It was a very strong performance and I'm absolutely delighted the team can present itself like this in front of our fans. We needed exactly that today, it was a big win but it’s not done yet. It is not time for celebration."

Chelsea forward Werner said, "The first half was the picture of the whole season for me. I was close but not really close. I think it's the unluckiest season I've ever had and will have maybe. Offside, a clear penalty and then I want to make a header, I get a little push and I head it against my arm.