Chelsea’s 2-0 victory over Everton was a solid indicator of where these two clubs are at right now. Going into this one, the Toffees were only a point behind their fellow Blues who reside in west London. However, after ninety minutes of action, this was a reminder that there is a rather large gap between the two clubs.

It was a standard victory for Thomas Tuchel’s side and for Everton, a standard defeat at Chelsea, having not won at Stamford Bridge since 1994. The home side got the job done and the visitors struggled to impose themselves. Carlo Ancelotti’s team could have played another 27 years and wouldn’t have won here on this showing.

From the moment Kai Havertz guided the ball towards goal and it deflected in off Ben Godfrey it felt like job done. Jorginho converted a penalty on 65 minutes to make sure. That’s not a slight on Everton but when it comes to the top four, Chelsea do this annually. For the Toffees, in the Premier League era at least, they have seriously battled for a Champions League spot as many times as they have battled against the drop.

The difference between these two sides right now is that Chelsea are experts at fighting at the top of the table heading into the business end of the season while the Merseysiders are only just starting out in hoping to make this a regular occurrence. Chelsea, too, have huge depth, Everton do not. Without key players like James Rodriguez and Abdoluaye Doucoure, they were unable to hit their usual standard. 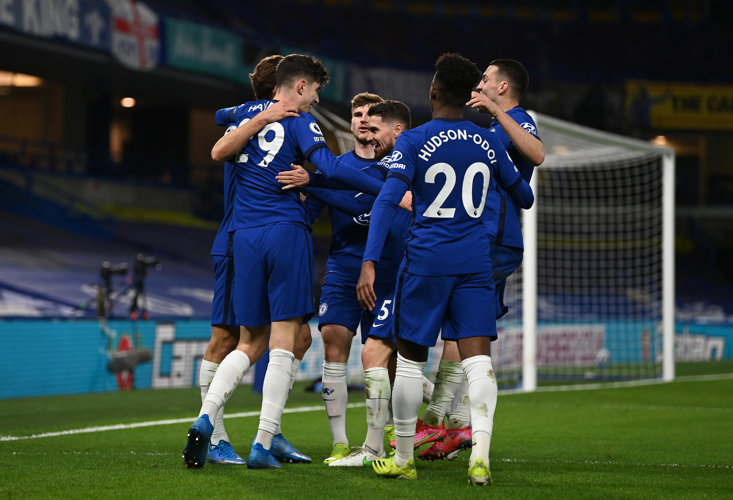 Yes, Chelsea only appointed Thomas Tuchel earlier this year after sacking club legend Frank Lampard but they have an abundance of talent, world-class stars and a winning mentality embedded into the club. The former Borussia Dortmund and PSG boss needs to make changes here and there, of course, but Ancelotti had to take a football club, give it a right good shake and take it into a completely new direction when he arrived at Goodison Park in December 2019.

Already, the Italian has made massive leaps. Winning at Tottenham with ease on the opening day of the season with a seriously professional performance was impressive, while ending Everton’s 21-year Anfield hoodoo sent fans into delirium and removed two decades worth of psychological baggage.

The Toffees are on a clear path of progress but on Monday they were shown that success town and glory city are still miles away in the distance. That’s not to say though that they are not on a positive journey. Boasting one of the greatest managers of all-time, top talent now keen to sign for the club and a new, iconic stadium to look forward to, the good times will return to the blue half of Merseyside.

For Chelsea though, they will return sooner.

"Every victory is a step forward," said defender Cesar Azpilicueta after the game. "We know we had to recover the ground that we lost and tonight was a really good performance. The team worked perfectly, we played as a team with and without the ball. From the striker to the keeper, everybody is doing their job."

Now four points clear in the race for the top four, they are in the ascendency. Tuchel’s side did what they had to do. They had energy, they pressed well and they attacked with vigour. They got the three points in a matter of fact way. It is what the top clubs do.

Chelsea are already very close to being where they want to be. Everton, they are not. Not yet. This game showed how far the two teams have to go.