Federico Chiesa wasn’t even born when his father, Enrico, scored a European Championship goal in England. Back in 1996, Chiesa senior netted the only goal as Italy lost 2-1 to Czech Republic at Anfield in a forgettable campaign which saw the Azzurri crash out at the group stage.

But when son followed father in netting at Wembley on Saturday night in Euro 2020, his goal held far greater weight. The 23-year-old’s strike five minutes into extra time broke the deadlock as Italy beat Austria 2-1 to reach the quarter-finals of a competition they have a very real chance of winning.

Chiesa did superbly to hold up the ball and fire home ferociously with his left foot from a beautifully weighted ball by Leonardo Spinazzola, giving the Azzurri a lead they had barely looked like gaining for long spells of an often-tepid performance in the Round of 16.

The Italians had spent much of the first half probing without penetrating. Spinazzola got into a couple of good positions thanks to his constant running from left-back, while Domenico Berardi should have done better with a bouncing through-ball which put him in acres of space but he allowed himself to be closed down. Ciro Immobile had the best effort of the opening 45, lashing a dipping drive from range against the outside of Daniel Bachmann’s post. 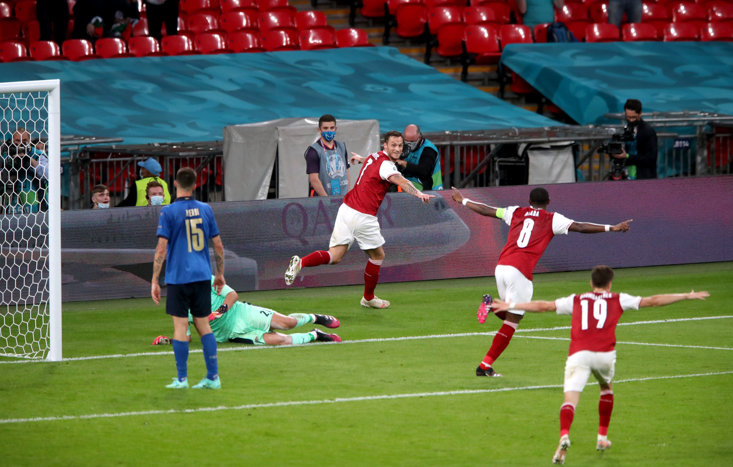 ARNAUTOVIC'S DISALLOWED STRIKE WAS A REAL WARNING FOR ITALY

After the break, though, they were flatter rather than livelier. There was no spark about their press, no urgency about their possession. They looked like a team in need of a lift, and when Marko Arnautovic found the net from David Alaba’s header across goal it appeared they had been made to pay. But the VAR decision to overturn the goal gave Roberto Mancini’s side a lifeline they barely deserved.

There was no sign that they were about to use that as the kick up the backside to get them back to their Group A form though, and their lacklustre performance continued for the remainder of the second half.

But once Mancini started to give his substitutes their head, Italy really began to stretch the Austrians. First, Chiesa finished with aplomb, then fellow sub Matteo Pessina made the game safe with a great touch out of his feet and a confident low finish. They needed that second goal too, as Sasa Kalajdzic headed home with five minutes to go to half the deficit and end Italy's run of 34 goals without reply, spanning 11 clean sheets in total.

This will not be the game that Italians play over and over on repeat if they go on to win Euro 2020, but just like their near-miss against Australia at this stage of the 2006 World Cup, it may prove to be the moment they got themselves out of jail and back onto the path towards glory.

In the meantime, it’s another great moment for the Chiesa family scrapbook.