The date was 12 June 2021. It was the early days of Euro 2020 and Copenhagen’s Parken Stadion played host to Denmark’s tournament opener against Finland. Shortly before half-time there was a moment that made time stop, sending shockwaves around the world. That was when Christian Eriksen collapsed on the pitch after suffering a cardiac arrest.

The traumatic scenes that followed were difficult to process as everyone feared the worst. But thanks to the valiant efforts of his teammates - particularly his captain Simon Kjaer - and the medics on the scene, Eriksen miraculously survived.

The world was delighted to see the midfielder make a full recovery and he was fitted with an Implantable Cardioverter Defibrillator (ICD) but no one would have even contemplated the idea that he would play football again.

Here we are now, 10 months later and Eriksen is back playing at the highest level with a smile on his face. After Italian rules meant the 30-year-old couldn't continue his journey in Serie A, Eriksen parted ways with Inter Milan and returned to England for his second chapter in the Premier League. Many would have expected a return to Tottenham Hotspur but it was the division debutants Brentford who won the race for his signature.

He reunited with Bees boss Thomas Frank, whom he had known from when he was a teenager playing for Denmark’s Under-17s while Frank was the coach. The pair remained in contact when Eriksen went on to Ajax and their friendship was rekindled six years ago when the Brentford manager originally joined the west London outfit’s backroom staff.

Brentford’s epic journey to where they are now is a remarkable tale and they have established themselves as the business model in football to follow. Their scouting and recruitment always pays off, and when it comes to making a profit they are one of the best in the game. While the capture of Eriksen wasn’t the traditional method of how the Bees acquire new talent, it was a move that felt right for all parties.

They are a side who like to play an expansive style of football and, with Eriksen having all the attributes as a creator, his arrival was expected to add a new and positive dynamic to Frank’s team if the player could return to his best level. And the most amazing thing is, Eriksen has continued to shine with the ball at his feet and while he has only played six games since his return to action he has already contributed on the pitch for the team. 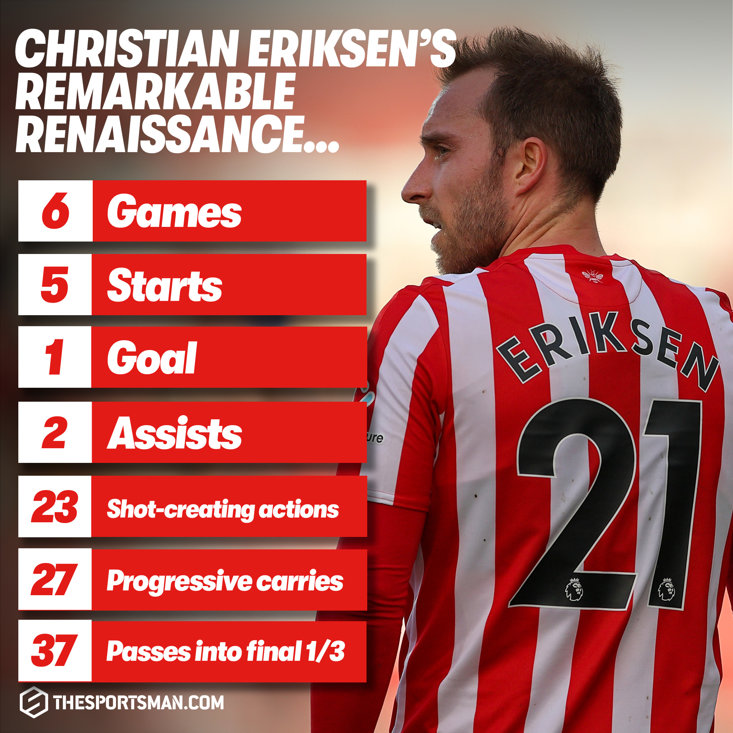 All of his appearances have come in the Premier League, five of them as starts, and he has already provided one goal and two assists for his new side. His influence has led to an upturn in results, with the Bees stunning their west London neighbours Chelsea with a 4-1 hammering at Stamford Bridge, where Eriksen scored his first goal for the club. He’s shown that he still has much more to give and his bright start to life in TW8 has taken him back into the Denmark squad.

The former Spurs star did not hide his desire to return to the international stage and make the squad that will be flying to Qatar for the World Cup finals this year. Upon his return to the Denmark squad, he immediately showed fans what they had been missing in his absence, scoring in back-to-back games last month.

To see someone go through what he went through last summer, to not only be alive and well but back doing what he loves most, has been truly inspiring... One of the greatest sports stories in history.

His current deal with the Bees expires at the end of the season and while there is no definite answer as to what his next move could be, there is no denying that he appears to be happy in his new home and everyone associated with Brentford is equally as happy to have him around.

If he were to sign an extension there for another year it would be a huge boost for him and his hopes for Qatar but also for the Bees as they look to build on their inaugural campaign in the Premier League. He faces former club Tottenham on Saturday, but for next season Eriksen in the heart of midfield could be key for Thomas Frank as he looks to take the Bees to the next level.