Football
News
Once again it fell to CR7 to save United's blushes, as Norwich performed admirably at Carrow Road
Joey Mills
19:33, 11 Dec 2021

It had to be him. On a tricky night in East Anglia, Dean Smith’s Norwich City provided a stern test for Manchester United. But when the smoke cleared, Cristiano Ronaldo stood tall as football’s ultimate match-winner. The ultra-prolific forward’s penalty proved the difference between the two sides, as Canaries team depleted by COVID and injuries put on a show.

The appointment of a manager so closely associated with a particular style of play will always draw critiques when that style is not evident. Such was the case with Manchester United’s first half display here. There was none of the energetic pressing United had displayed in their two games under Ralf Rangnick so far. The Red Devils seemed content to let Norwich have possession and then try and win the ball back from deeper positions.

The first fifteen minutes were uneventful, with the game only sparking into some sort of life when Grant Hanley was taken off following a collision with Cristiano Ronaldo. The tangle seemed to wake up both sets of fans, and the Red Devils in particular took encouragement from a louder Carrow Road.

United were on top, but only marginally. Teemu Pukki threatened on a couple of occasions, spurning half-chances he may have taken on another day. Tim Krul was called into action only sparingly, but did very well to tip an Alex Telles free kick onto the crossbar. The Netherlands international also got down well to deny Ronaldo, after the United number seven twisted and turned in the area before hitting a firm shot.

The Canaries flew out of the blocks in the second half, putting United’s defence under immense pressure. Pukki forced a top save from David De Gea after finding space between Victor Lindelof and Diogo Dalot. A series of corners put the visitors under further strain, with Harry Maguire making three consecutive headed clearances. 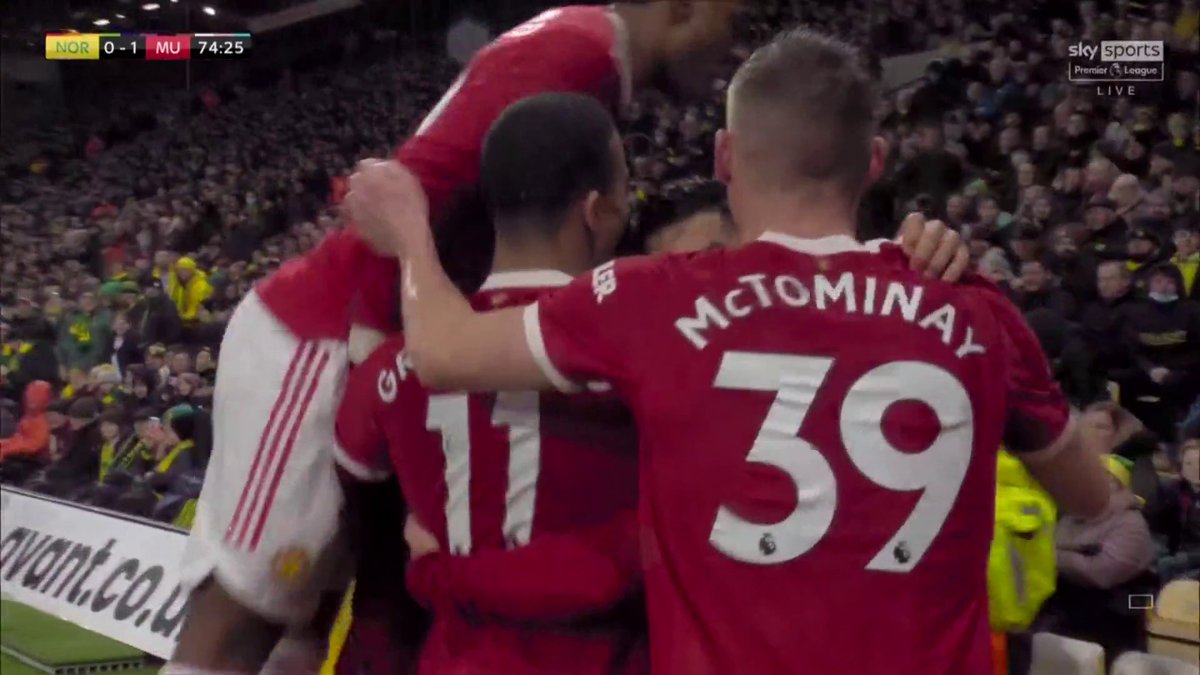 In a worrying moment, Lindelof left the field appearing to complain of chest pains. Encouragingly, he was walking around and talking with medical staff, but was correctly substituted for Eric Bailly. Football has had several harsh recent lessons in why health incidents like this should be taken seriously.

In scenes we have grown accustomed to this season, United found themselves in a difficult game, and needed someone to settle matters. That someone? Who else but Cristiano Ronaldo. United’s talisman was dragged down in the box by Max Aarons, and there was not even the slightest question over who would take the resulting spot kick. Ronaldo took it with aplomb, and finally his side were ahead in a game they’d found much harder than predicted.

United’s other stand-out player of the season had his presence felt next, as a very good Ozan Kabak header drew a truly world class stop from De Gea. The Spaniard dived to scoop the header away from danger, once again proving invaluable to a side he has rescued so many times in his career.

Ronaldo had another chance late on, ballooning over a shot you’d have bet the house on him taking. But his work as United’s saviour was already done by this point. Dean Smith’s side had put on a fine performance, showing steel and incisiveness they hadn’t displayed early in the season. United failed to match the promise their first two games under Rangnick had shown, but crucially, they walk away from a difficult evening with three precious points.