Football
News
Jurgen Klopp's men were back to their brutal best in the Champions League on Tuesday night
Elliott Bretland
22:25, 16 Feb 2021

This wasn’t vintage Liverpool but this was certainly Jurgen Klopp’s men giving us a stark reminder of what Liverpool’s success throughout his tenure has been all about. They were sharp, they were clinical and they were on it. Non-stop.

RB Leipzig didn’t stand a chance and were well beaten 2-0 on Tuesday night when the two sides met in the Champions League last 16. This was a throwback to the Liverpool who romped home to the Premier League title, the Liverpool with a ferocious desire to win.

Taking a giant step towards the quarter-finals of Europe’s premier competition doesn’t exactly scream crisis club but the Reds badly needed this win. They needed the confidence boost, they needed to be back in the groove and they needed to be firing on all cylinders. They did with gusto.

Marcel Sabitzer had his hands on his head well before Mohamed Salah had pulled the trigger. The RB Leipzig midfielder knew instantly what a grave error he had made. Playing a stray ball to one of his defenders, time stood still for the Austrian as the ball trickled into space but suddenly Mohamed Salah appeared from nowhere. In a flash the Liverpool marksman was on it, ready to pounce and kill like a ravenous lion in the safari. He duly obliged and put the Reds 1-0 up. 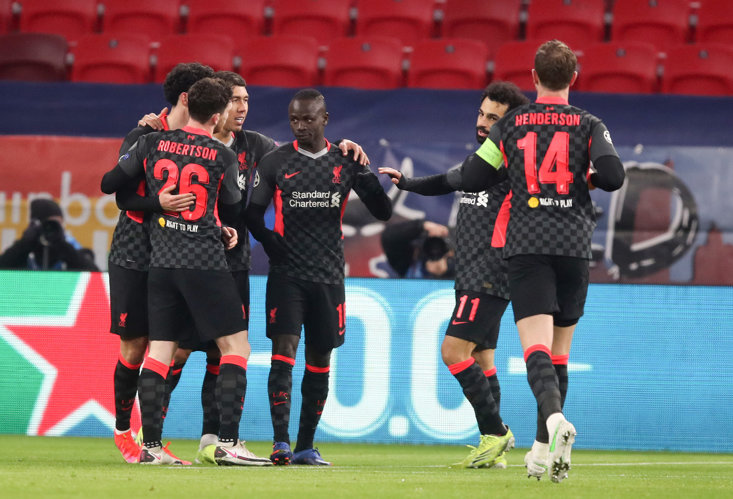 Five minutes later, it was Sadio Mane’s turn to go for the Leipzig jugular and put the Germans first leg hopes to bed. The Senegalese was clinical and lethal. Nordi Mukiele misjudged a high ball and the second he lost control it was game over. Instantly the ball now belonged to Mane who was away and running at goalkeeper Peter Gulacsi like a freight train. He was in, Liverpool were in and on the hour, Jurgen Klopp’s side led 2-0.

The Reds front three of Salah, Mane and Roberto Firmino sniffed out danger at every turn and made the opposition pay. They set their traps high up the pitch and killed off RB Leipzig with two swift strikes.

As Sabitzer first took the ball before Liverpool’s opener, Salah was drifting out on the wing, strolling and not at all in the action. But he was watching, waiting, waiting for the right moment. The Egyptain could smell the possibility of danger and was lying in wait. Then, he was gone and bolted into action. He took one touch, two touch, Gulacsi made his move and Salah slotted home.

This was the Liverpool who enthral fans and frighten the opposition into submission. This was a Liverpool side who continued where they left off in September. The champions elect who were in the groove. Of course, the Reds have played better games than they did on Tuesday but after their recent struggles domestically, going down 3-1 at Leicester the latest setback, they will have been boosted with the victory over RB Leipzig. They will have reminded themselves of what they are about.

Leipzig, playing their ‘home’ leg at the Puskas Arena in Budapest, nearly 500 miles away from the Red Bull Arena due to the current Covid restrictions, looked leggy and even disoriented at times. Liverpool took full advantage of the fact. Liverpool annihilated teams last season and at the start of this campaign and showed what they are about on the European stage.

"It's not that we won this game and everything is fine. But again we played good football," said Klopp after the victory. "I think people expected us to slip tonight. People thought it would be tricky and it was but we did it."

After so many setbacks in the Premier League and failing to find the net at home against Brighton and Burnley, the narrative has been shaped that Liverpool are misfiring and to some extent they have. However, the fact that Salah’s strike was his 24th of the season proves that Liverpool are not exactly experiencing a crisis but rather a bump in the road.

Liverpool set themselves such high standards last term that any run which doesn’t include “WWWWW” will see questions asked. But in Hungary, they had the answers once more and defended from the front as they know best.

No matter what happens in the Premier League when they welcome Everton to Anfield on Saturday and beyond, Liverpool have a two-goal lead for when RB Leipzig go to Merseyside in three weeks’ time and tonight took a massive step towards more European glory. Crisis? What crisis? Liverpool were fit and firing and were back to their brutal best.