Football
News
Vale secured a 3-0 win in the capital which takes them back to League One after five years
Conor Keane
17:57, 28 May 2022

It has been five years but Port Vale are back in League One. The Valiants overcame Mansfield Town in the League Two play-off final in their first appearance at the new Wembley Stadium as they comfortably beat the Stags 3-0.

The heroes of the afternoon were Kian Harratt (on loan from Huddersfield Town), the club’s top goalscorer James Wilson and former Mansfield man Mal Benning. They struck twice in four first-half minutes as they tormented Mansfield’s defence, subsequently leading to Stags defender Oli Hawkins getting sent off after two bookable offences.

In the build-up to the game the spotlight was on Valiants manager Darrell Clarke who has had a tough 2022 following a personal loss, in which he spent six weeks away from work in bereavement. He had already thanked the “exceptional” support he had received from the club, the supporters, League Managers’ Association and Professional Footballers’ Association.

The 44-year-old has shown great strength upon his return to the dugout. In the 10 games that followed his return to the action he helped steer his side into the play-offs, finishing fifth on 78 points, with his group of players giving their all for him as they gave their support during his time of grief. Clarke deserves this moment given what he has been through this year and it follows up the news that will delight the supporters that he has penned a new five-year deal at the club.

Lining up against the club from his hometown where his grandfather was a steward  and where his professional career began, making 174 appearances for the Stags, the most for a single club in his playing career,  Clarke was shown a mark of respect and support from both sets of fans at the national stadium in the eighth minute of the match which was another shining example of when football fans unite to show their support.

Across the 2021-22 campaign, his players have been consistent all term, having picked up 39 points at Vale Park and on the road, and they showed that trait once again at Wembley as they outclassed and outfought Nigel Clough’s team. 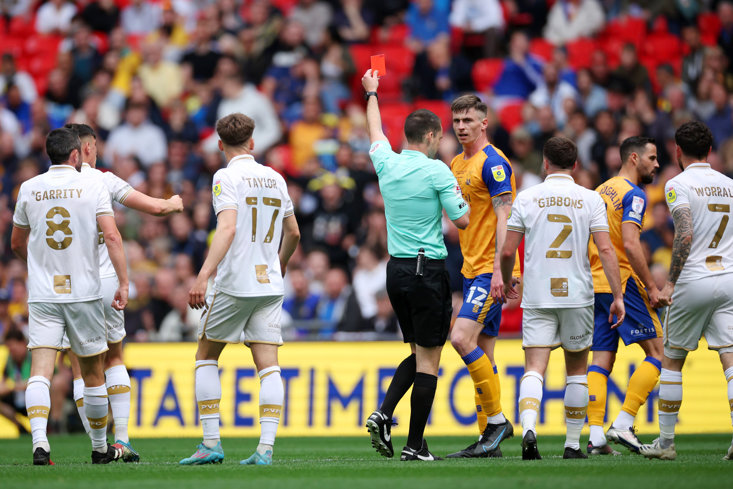 Mansfield had the first chance of the game and it came from a lack of communication between Port Vale defender James Gibbons and goalkeeper Aidan Stone as Jamie Murphy ran through to head towards goal but he was then denied by Stone.

The Valiants were able to shake themselves off and had their first real chance which hit the woodwork. After a nice break forward, Kian Harratt was teed up on the edge of the box and his left-footed effort rattled the left post. The striker then broke the deadlock moments later with a diving header into the bottom left corner after another bright move from his side as he met Benning’s cross from the left - it was his fifth goal of the season and third against Mansfield.

With all the momentum in their favour and the Stags stumbling, the Valiants were able to double their lead quickly through Wilson - his 15th of the year in what has been his most prolific to date. The striker was quick to react after Ben Garrity’s header bounced off the crossbar and the former Manchester United attacker nodded home from close-range.

The Stags’ afternoon went from bad to worse in the first-half as defender Hawkins was sent off following two yellow card offences in the space of five minutes, with his final act being a crunching challenge on goalscorer Wilson. Their comeback task became even greater but they nearly gave themselves a lifeline before the break as leading marksman Rhys Oates pounced when goalkeeper Stone failed to hold onto the ball, but his shot was cleared off the line.

In the second-half, Mansfield came out with a bit more urgency but they were still burdened by being a man down and they always exposed themselves to counter-attacks. They had a few decent efforts as the game went on but the Valiants almost put the game to bed twice with the ball finding the back of the net, only to be ruled out for offside on both occassions. The game was then sealed in the final minutes as Benning fired in a volley from the left, giving Nathan Bishop in goal no chance.

The scenes in Wembley were emotional and incredible and they were likely mirrored in Stoke-On-Trent. Now the Valiants can start preparing for life back in the third tier where they will be dealing with a whole different kettle of fish, but this team, led by a brilliant boss, won’t be fazed in the slightest.