Football
News
A 2-2 draw vs Genk should be enough to see the Hammers into the knockout stages
Simon Lillicrap
19:52, 04 Nov 2021

A delectable double from Said Benrahma meant that David Moyes 1000th game as a manager ended with half a smile as his West Ham side drew 2-2 with Genk, and with it, they have almost guaranteed a place in the knockout stages.

It wasn’t an easy night for the Hammers, who relied on the brilliance of Benrahma to turn around a one goal deficit, before only missing out on the three points due to an unfortunate own goal from substitute Tomas Soucek. This end-to-end encounter was a gripping watch from the first minute, but Benrahma was the star of the show.

When he first came to these shores three years ago with Brentford his talent was obvious, and it was clear he would be playing on a European stage sooner rather than later. Three years with the Bees helped develop his game before he got his Premier League move, and although he has had to be patient, this season he has shown exactly why he is so highly rated.

If Moyes was feeling somewhat misty-eyed about his landmark game, Genk were in no mood to allow him an easy night. After just four minutes, they took the lead in clinical fashion as Joseph Paintsil latched onto Junya Ito’s through ball to finish past Alphonse Areola - via the post.

This end-to-end encounter seemed to unsettle West Ham, who are used to controlling matches this season in a more measured manner. Paintsil’s pace in particular was causing the Hammers issues, as he got in behind again to tee up Ito who scuffed one wide before he saw another effort tipped past the post by Areola.

The 23-year-old Ghanaian was in exceptional form, but West Ham also had chances of their own to level before the break. Craig Dawson saw his header tipped over the bar before Benrahma slipped the ball into Michail Antonio but his shot was half-stopped by Maarten Vandevoordt before it was scrambled away from the goal line by Patrik Hrosovsky.

On the hour mark, Moyes rang the changes. A triple substitution which saw Jarrod Bowen, Pablo Fornals and Soucek enter the action seemed to flick a switch in the players’ minds. This was time to produce, even if Antonio had been withdrawn.

Less than a minute later the manager was vindicated. Manuel Lanzini slipped in Vladimir Coufal in the right channel and he pulled the ball back perfectly for Benrahma to finish. Soucek’s arrival to partner Declan Rice strengthened the team but it was his countryman at right-back who had the best opportunity to put the visitors in front. 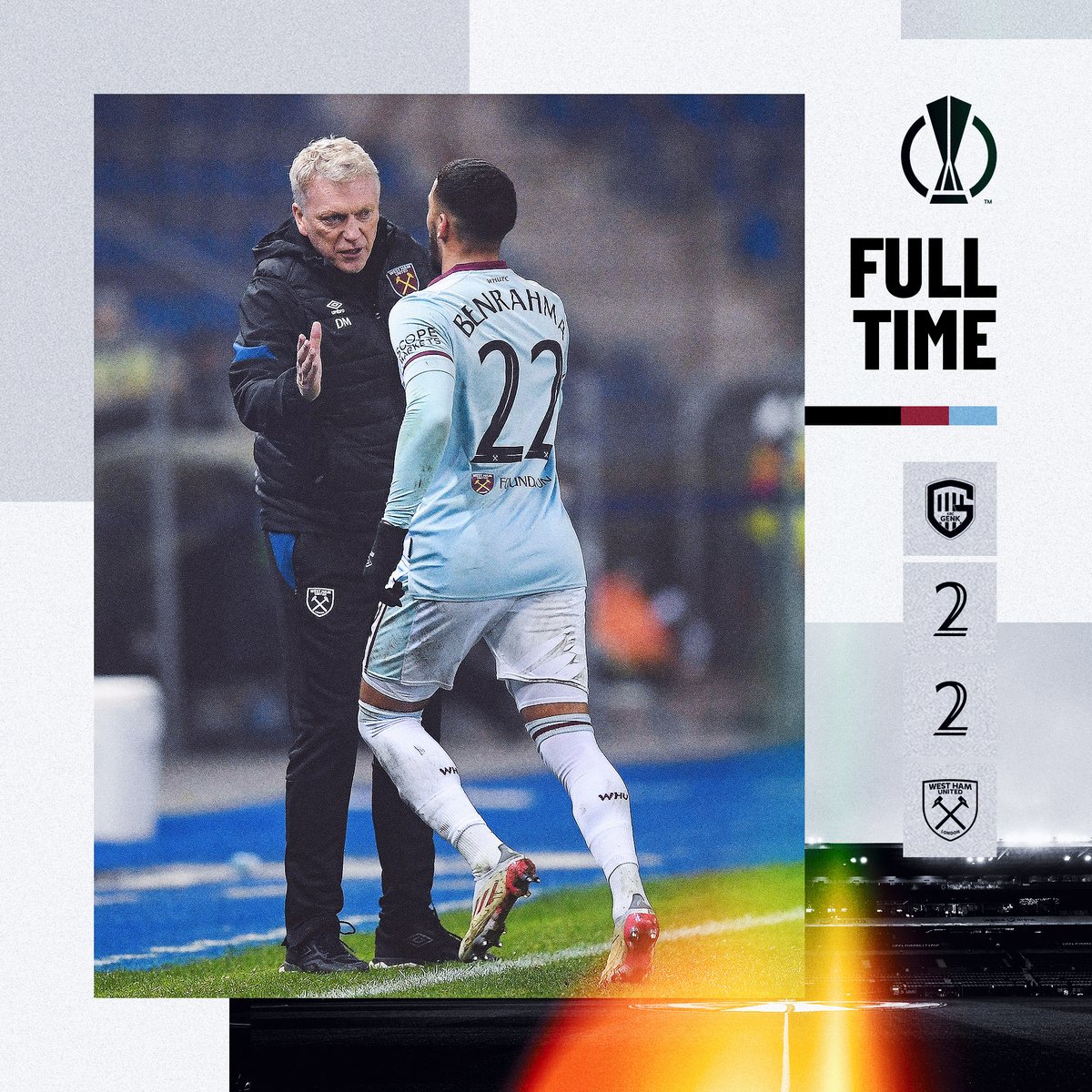 Aaron Cresswell’s cross was parried by the keeper and Coufal could only steer the ball wide with his left foot. The chances kept on coming, Dawson’s second headed attempt of the match just missed the post but they would get their noses in front thanks to Benrahma.

He stood up his marker, went past him with ease and then drove into the box  before finishing past Vandevoordt. It was a remarkable piece of skill from the Algerian who has progressed in East London this season, but it wouldn’t be enough to secure all three points.

Soucek, who had been so solid, diverted a cross past his own goalkeeper to level the score and although it won’t impact West Ham’s qualification - it did prevent Moyes from securing a landmark win. West Ham are marching into the knockout stages however, and Moyes’ stock continues to rise.

Meanwhile Rangers are still in with a chance of qualification after securing a 1-1 draw at Brondby in Group A, which takes them onto four points - level with second place Sparta Prague.