Football
News
With a goal and two assists, this could be the performance that marks Alli's return to Spurs’ Premier League side
Simon Lillicrap
19:01, 24 Feb 2021

Is there any way back for Dele Alli at Tottenham? After tonight’s performance in an emphatic 4-0 win over Wolfsberger, which saw Spurs qualify to the last 16 with ease, he certainly seems to be on the right track. He opened the scoring with a sublime overhead kick which drew applause from his manager before adding two excellent assists, first whipping in a sensational cross for Carlos Vinicius to add a second before teeing up Gareth Bale who scored the third after coming off the bench.

Playing in his preferred number ten position, Dele still possesses something that no other Spurs player has. Lucas Moura has the pace, Eric Lamela the clever movement and Gareth Bale the fierce shot but nobody else in Mourinho’s squad is a natural number ten, with the guile, touch and sheer ability of the Englishman. His perfectly weighted pass through to Bale allowed the Welshman to fire the ball into the top corner with aplomb and it is those little details that separate Dele from the rest of the squad.

This could be the performance that marks his return to Spurs’ Premier League side, after months out in the cold. A heart-to-heart between the attacking midfielder and his boss Mourinho two weeks ago could well have put the building blocks in place for a successful end to the season, and a healing of the previously damaged relationship between the pair. 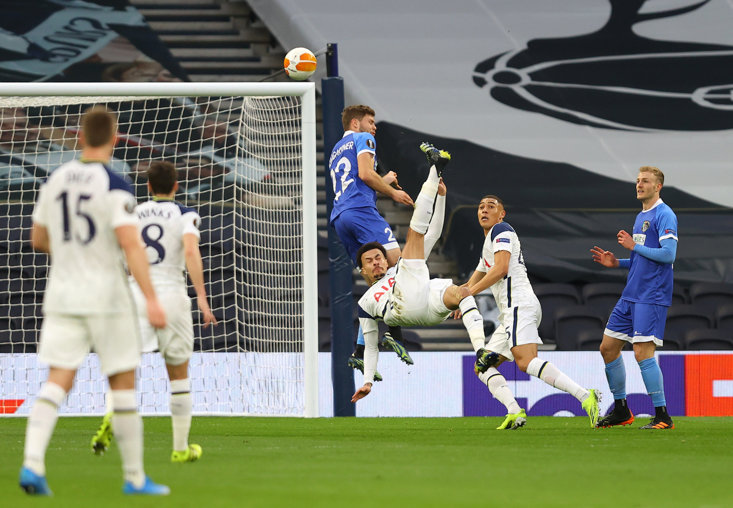 “It's an important season for the team, it’s an important period of the season for him also,” The Portuguese boss said after the chat. “We need a good Dele Alli. We are waiting for him to be back to normality."

"We miss some creation or some magic around the attacking areas so we need him back and I made that very sure to him," Mourinho continued. "Of course a conversation doesn't make miracles. It doesn't put a player in great form without limitations in terms of fitness, but I believe the conversation was the extra motivation he needed to be back as soon as possible.

Tonight Dele certainly went for it and, albeit against poor opposition, proved to any doubters that he still has what it takes. More importantly, he looked for the first time in almost a year, to be seriously enjoying his football again, and playing with the swagger that makes him such a good player. The smile was back.

As Mourinho touched upon, the remainder of the season is absolutely crucial for both Spurs and Alli, who is seriously at risk of losing his place in the England squad at Euro 2020 with the likes of Jack Grealish, Mason Mount, James Maddison and Phil Foden all on fire this season. Still, if he can regain his form for Spurs, having had that experience under Gareth Southgate at the World Cup already, he could still play a key part for club and country this year.

The Europa League, for players like Vinicius, who scored two on the night and looked full of confidence, Bale and Alli has been somewhat of a godsend for Spurs this season, which seemed incredibly unlikely at the second qualifying stage back in September. Mourinho was also able to hand debuts to 16-year-old Dane Scarlett and 17-year-old Nile John, both players who have impressed in first-team training in recent weeks. That trio of senior players, along with the young guns have used this competition for all-important minutes, something that may not have come their way in domestic competitions.

Now Dele looks to be firing on all cylinders again, the 24-year-old is on track to revive his Tottenham career and in doing so, he may make Southgate sit up and take notice. 107 days and counting until Euro 2020 starts. Is it going to come around too soon for Dele Alli?