Liverpool are prolific. While they sit third in the Premier League table, they are comfortably top of the scoring charts, having scored 35 goals. This is five more than first-placed Chelsea. Their Champions League campaign has followed the same pattern, scoring 15 goals in their five victories. As has been the case for the majority of Jurgen Klopp’s reign, much of this is down to their front three. Mohamed Salah, Sadio Mane and… Diogo Jota.

This is not to belittle the contributions of Roberto Firmino. The Brazilian is currently injured, and it is quite possible he will slot into his familiar deep-forward role when he returns. But Jota, after an injury-truncated first season in red, looks a natural fit for the next evolution of Klopp’s Liverpool. The Portuguese star has five goals from eleven games so far this season, and offers Liverpool the sort of comfort they have not had in previous years when one of the star forwards is unavailable.

Before Jota was signed from Wolverhampton Wanderers at the start of the 2020/21 season, Divock Origi was first reserve when it came to a replacement forward. The Belgian will forever hold a well-earned place in club folklore for his Champions League final goal in 2019, but he has not been potent enough as a back-up. Origi has only gone above the five Premier League goals Jota has already notched this season on one occasion, managing seven strikes in the 2016/17 campaign. The fact Origi’s appearance stats have markedly dropped since Jota was signed is indicative that perhaps Klopp has found what he’s looking for.

When the former Porto man joined the Anfield club at the start of last season, it appeared he was joining to be a better class of back-up. Usually deployed as a winger but occasionally playing centrally at Molineux, most assumed he would provide only mild competition for the places of Mane, Salah and Firmino. Klopp’s exhilarating Liverpool were built on the attacking firepower of their star forwards, and few saw that changing. 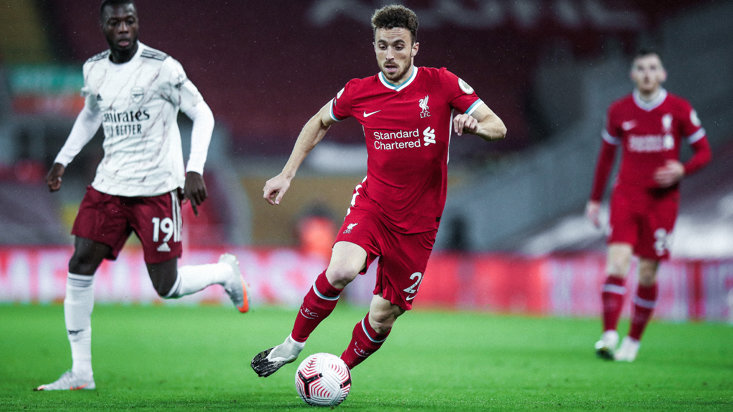 Like much of the careful tweaking and incremental improvement Klopp favours, the change did not come overnight. But Jota spent his first season at Liverpool as a very useful attacking utility man. He spent ten games on the left wing and six on the right, scoring a total of six goals playing wide. But the ex-Pacos Ferreira forward also staked a convincing claim for the central berth. He turned out as a striker on twelve occasions, his most in any single role, and netted five goals. Scoring a highly-respectable 13 goals in 30 games, Jota actually outscored Firmino, who managed nine in his 48 appearances across all competitions. Jota had not just proved an effective roadie to Klopp’s heavy metal footballers, he had made a case to be the rhythm guitarist.

This season has been more heavily-weighted to the centre forward position for Jota. He has played 12 of his 15 outings in the role, and rewarded the faith his manager has shown by making him a frequent starter. While Firmino’s recent injury will obviously increase the burden on him, it should be noted Jota has been the preferred choice. The former Wolves star whose goals fired that club into the Premier League and helped make them a force is now excelling at the top end of English football.

While Liverpool were picking up European and domestic silverware at the turn of the decade, it was oft-repeated that the eventual decline or break-up of the Salah/Mane/Firmino triple threat was the only thing that could stop them. In a season where Salah has crossed the 100 Premier League goals threshold, while Mane has scored his 100th for the club, Jota has emerged. The Portugal international looks like turning the vaunted three into a ‘Fab Four’. And we all know how they feel about a ‘Fab Four’ on Merseyside.

Jota is 10/11 to score anytime vs Southampton with Betfred*