Football
News
It was another impressive display for Wolves, who dug in for all three points
Simon Lillicrap
18:36, 20 Feb 2022

Bruno Lage’s Wolves are at it again. They were second best against Leicester City on home soil but still came away with all three points after Daniel Podence scored the all-important winner in a 2-1 success over the injury-hit Foxes.

This win makes it 45 Premier League games in a row that Wolves have been unbeaten after scoring the first goal, and even though they struggled to cope with Leicester in the second half from a possession point of view - they kept them out.

Meanwhile, this marks five league games without a win for Brendan Rodgers’ Leicester side, who played reasonably well throughout, but just lacked that cutting edge. Jamie Vardy is such a big miss for this side and although Ademola Lookman was a bright spark on the wing as he scored his fourth goal of the season, they walked away empty-handed.

Lookman got at the Wolves’ back-line early on and teed up Youri Tielemans who could only place the ball wide. That early missed opportunity soon came back to haunt the visitors, who have been misfiring in recent weeks from a domestic point of view.

As Wolves ventured forward, Raul Jiminez laid the ball back to Ruben Neves who side footed the ball into the bottom corner from the edge of the box. It was his first Molinuex goal in over a year and felt so vitally important given what we have seen from Bruno Lage’s side. Given their rock-solid defence and that imperious record of scoring first, this was a nightmare start for the Foxes.

Podence, a threat throughout, turned Leicester inside out before setting up Ait-Nouri who could only fire the ball wide. He was a bright spark for Wolves, but both sides struggled to pin the other back with any consistent pressure.

Leicester then pressed as Lookman fired wide from inside the box but he would get his goal before the first half was up, as Tielemans picked out a wonderful ball to Marc Albrighton, who set up for Lookman to finish from close range.

The winger, only handed a start due to the absence of Harvey Barnes, consistently troubled the Wolves defence and in the second half he threw in some step-overs before firing the ball at Jose Sa. On the hour mark, Wolves hadn’t even managed a shot in the second half, while Leicester had four, a sign of how the game had swung in Brendan Rodgers’ favour.

The Sportsman
@TheSportsman
👌 Daniel Podence with a bit of quality...
📹 @SkySportsPL
#WWFC | #WOLLEI 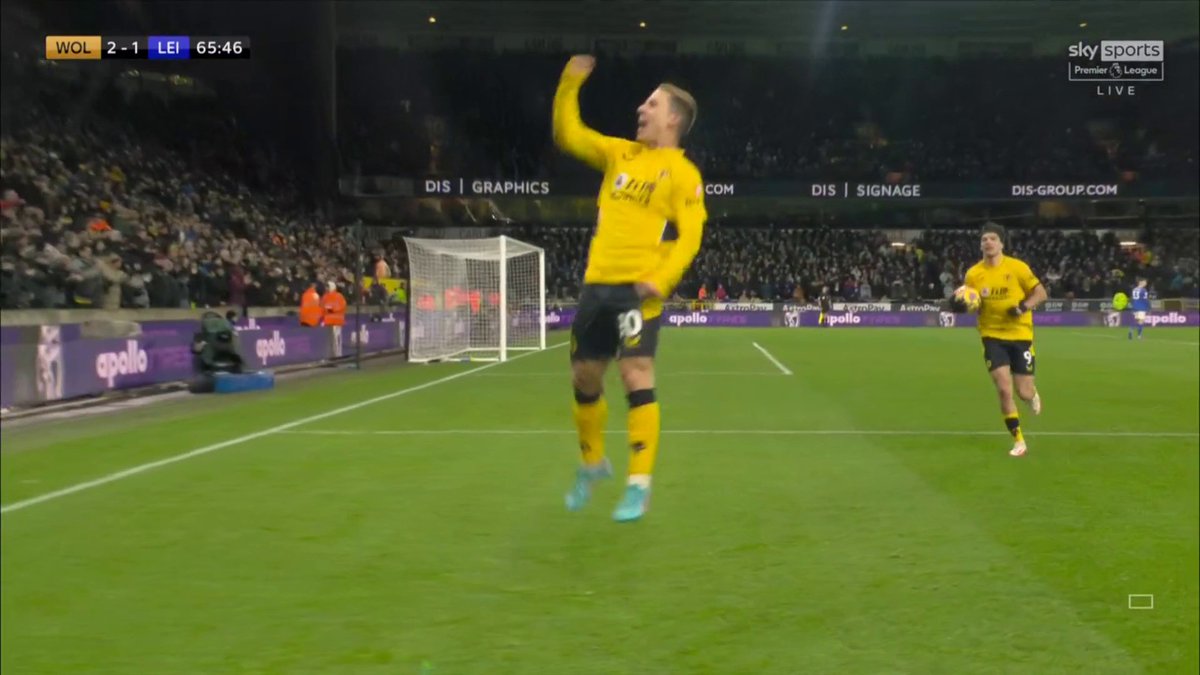 Lookman found space again on the left-wing before he fed Tielemans who just grazed the top of the net with a left-footed strike. Whatever Rodgers had done at half-time had clearly worked as the Foxes penned in the Wolves and created multiple chances. Albrighton couldn’t get a shot away in the box and from there the home side broke away.

Ait-Nouri flew past Periera before the ball was played into Podence on the edge of the box. He fired the ball into the bottom left corner to the delight of the home fans, even if the goal came completely against the run of play. Once again, Rodgers was left to rue those missed chances as the hosts made the most of their own attempts.

One thing that lifted the entire stadium was Pedro Neto’s return from injury, as he made his way onto the pitch with ten minutes to go. He has been a huge miss for Wolves this season, and yet, they have made stunning progress without one of their finest young talents.

James Maddison was introduced from the bench and hit two efforts wide as he began to influence proceedings but the absence of Vardy continues to hamper this squad in the attacking third.

Sa, arguably the best keeper in the league this season, denied Tielemans in added time, and that was enough for Wolves to take all three points. That win takes them up to seventh, and five wins out of six has put them just six points off fourth-placed Manchester United, with two games in hand.

Wolves have found their bite this term and although the Champions League may prove a stretch too far, they are in a great position to be playing some form of European football next term.