Ukraine booked their place in the quarter-finals of Euro 2020 with a dramatic late winner in stoppage time at the end of extra-time courtesy of Artem Dovbyk against Sweden in Glasgow on Tuesday night.

Dovbyk squandered a great chance to win the tie earlier from close range but he made amends to fire Andriy Shevchenko’s side to Rome, where they will face England in the quarter-finals following their last-gasp 2-1 win.

Following a start to the game which featured a lot of chances for either side, there were soon plenty of stoppages and the tempo slowed down dramatically as it looked as though both sides had played all their cards offensively. Ukraine saw the majority of the ball but they seemed to lack that cutting edge to seal the tie and avoid what would have been a nervy penalty shoot-out.

Marcus Danielson was sent off for a reckless challenge on Artem Besedin in extra-time. The game was already slowed down at that point with both sides looking lethargic and comfortable for a penalty shootout. Ukraine’s substitute Dovbyk missed a golden opportunity as he blazed the ball over the crossbar from close range, and his side really struggled to capitalise on their one-man advantage as Sweden were forced to park themselves in their defensive third and seemingly force the game to be settled on penalties. Sweden battled hard, but with their tired legs and the loss of Danielson in the closing stages, they feel just a couple of minutes short of seeing out the danger. 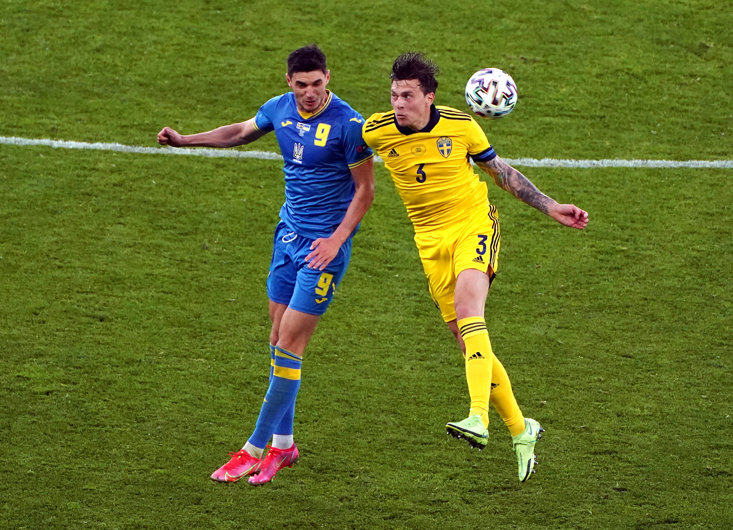 THE TWO SIDES CANCELLED EACH OTHER OUT FOR LONG SPELLS

Sweden started the game brightly, applying some early pressure on the Ukrainian defence. Shevchenko's side managed to absorb the danger and started to ask questions going forward themselves. Mykola Shaparenko found an opening for himself after a neat turn and drive forward into the final third but his effort was skewed wide and the Ukrainian should have done far better. Sweden goalkeeper Robin Olsen was called into action to deny Roman Yaremchuk in what was an excellent chance to open the scoring.

Young forward Alexander Isak had a chance to break the deadlock but could not hit the target. The first goal of the game came just inside the 30-minute mark as Aleksandr Zinchenko fired a powerful drive on the left past Olsen to put Ukraine ahead.

Sweden nearly conjured up a quick response when veteran Sebastian Larsson tried to catch out Georgiy Bushchan with a long-range free-kick toward the near post but the Ukrainian was able to parry the ball away.

Emil Forsberg scored his fourth goal of the tournament when his deflected drive beat Bushchan to level the score. Larsson came close to firing Sweden in front in the second half but his drilled effort went just wide of the left post. It was then Ukraine’s turn to almost retake the lead as Serhiy Sydorchuk hit the right post before the woodwork was rattled at the other end when Forsberg nearly added his second of the game.

As the game became more end-to-end in the second half, there was a flurry of chances. Andriy Yarmolenko’s vicious effort from the right side of the box was dealt with by Olsen before Forsberg was denied by the woodwork again moments later.

But Dovbyk was the eventual hero in the 121st minute, heading home a left-wing cross to leave Sweden crestfallen and book a first-ever European Championship quarter-final spot.