Friday night served a cracker in the Premier League as Leeds United and Newcastle United shared the spoils in a compelling 1-1 draw at St James’ Park.

It was a game that promised action, with the Magpies having conceded the most goals in the league and Marcelo Bielsa’s men having faced the most shots on target, and while it might not have been the goal-fest some may have expected, it certainly didn’t lack action, with the game producing a whopping 38 shots.

As thrilling as the game was though, it did favours for neither side, who both remain winless after five Premier League games this season. For Newcastle in particular though, there seem to be several dark clouds forming over the club, and particularly the role of manager Steve Bruce. Defeat for the 60-year-old tonight would have been catastrophic, but the point they earned, despite putting in a great performance along the way, will do little to relieve the vast pressure on his shoulders right now.

Leeds, sporting their violet third kit, drew blood first, setting the tone for a breathless first-half. Raphina’s peach of a cross went right over every defender in a black and white shirt’s head and Rodrigo calmly stepped over the ball which found its way past the reach of Karl Darlow and into the net.

It was the start that Newcastle fans had feared and the atmosphere was in danger of turning toxic early, but they fought back hard after going a goal down. The Toon got their deserved break on the stroke of half-time through Allan Saint-Maximin. Found by Joelinton on the left, the Frenchman weaved his way past three defenders before rifling a shot into the far corner, sending the locals into pandemonium.

Sky Sports Premier League
@SkySportsPL
🗣️ "It reminds me of that goal George Best scored all those years ago!"
Would you listen to that roar! 🤯
Saint-Maximin weaves his way past three defenders before rifling a shot into the far corner 🔥
📺 Sky Sports PL
📱 #NEWLEE 👉 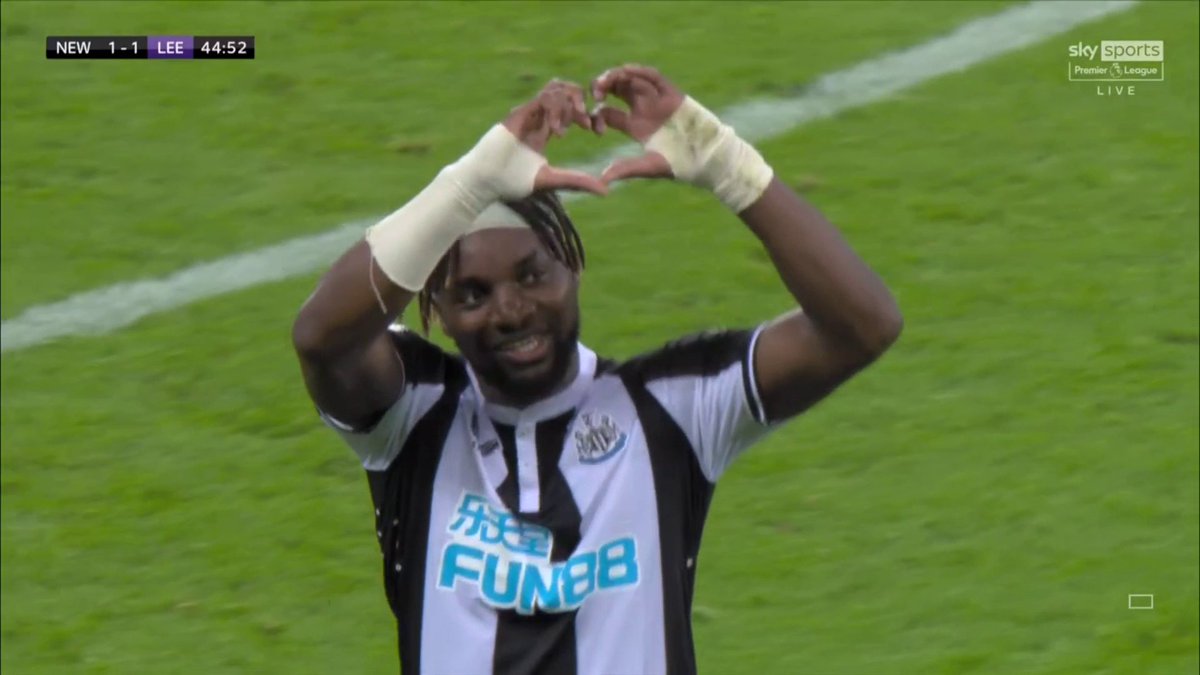 It was a half that was end-to-end from the moment Mike Dean blew his whistle, with chances created almost every time a side came forward. Moments before Saint-Maximin’s equaliser, he worked the ball to Matt Ritchie, who fired a corking effort against the post. For Leeds, Rodrigo put in an incredible shift and was a particular nuisance with his penetrative runs. On the half-hour mark, he picked out the late-arriving Kalvin Phillips on the edge of the area, but the England international dragged his shot inches wide.

The second half wasn’t as frantic as the first 45 minutes but it certainly wasn’t devoid of chances. Darlow was called into action to make a superb reaction save to prevent Jamaal Lascelles from heading Dan James' cross into his own net, atoning for his lacklustre reaction to Leeds’ opener. Moments later at the other end, it was Illan Meslier who was the hero, denying a boisterous Saint-Maximin his second of the game.

Bamford then spurned an incredible chance for the visitors when Rodrigo, once again sensational, threaded the recent England debutant through on goal but, with just the goalkeeper to beat, he fired tamely at Darlow.

Tonight's result sees Leeds climb to just 16th in the table but Newcastle are still in the relegation zone.

Speaking after the match, Man of the Match Saint-Maximin told Sky Sports, "I'm happy to score but we drew so l am disappointed. We have to have the mentality to win. We played against a tough team and had a lot of chances to win the game."