Football
News
It has been six years since the passing of one of the game's all-time greats
Matthew Crist
06:55, 24 Mar 2022

On March 24, 2016, football lost one of the most talented and recognisable players in the history of the game as Johan Cruyff, an icon for his generation, passed away at the age of 68.

The Dutchman epitomised football in the 1970s, becoming the first man to be named European Footballer of the Year on three separate occasions while also inspiring the Dutch national side to become one of the most appreciated teams of the day thanks to his philosophy of “Total Football.”

Born on April 25, 1947, Cruyff’s father was a grocer and the family home was directly across the road from Ajax’s stadium where his mother used to clean the club’s offices, she can be credited with one of the greatest talents in world football being discovered when she persuaded the club to sign her son at the age of just 12.

With the help and encouragement of Ajax’s English coach, Vic Buckingham, Cruyff was given his senior debut at 17 and so a superstar was born who would not only become an icon of the game but a revolutionary too, changing the way it was played during one of the most celebrated and decorated careers in history.

In his first full season with Ajax the club won the title, in no small part thanks to Cruyff’s phenomenal scoring record of 25 goals in 23 games. The following season Ajax defended their title and lifted the Dutch cup which completed Cruyff’s first ever double; he also ended the season as the top scorer in the Eredivisie with 33 goals. 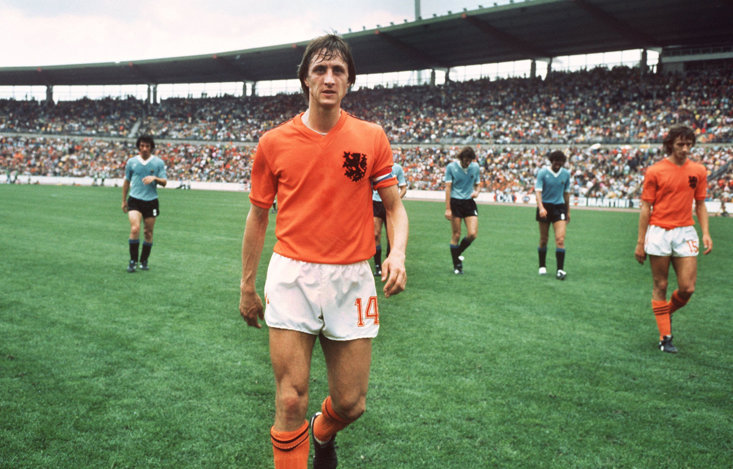 Between 1964 and 1973 Cruyff won no fewer than six league titles and four domestic cup competitions with Ajax while winning three consecutive European Cups; the first team to do so since Real Madrid in the 1950s with the likes of Di Stefano and Puskas in their ranks.

In 1973 Cruyff moved to Barcelona for £922,000, a transfer which doubled the previous world record fee for a player, but it was a price that he quickly justified as the club, who were in the relegation zone when Cruyff arrived, won the La Liga title six months later for the first time in 14 years, while in 1974 he received his third European Footballer of the Year award in four years.

But for a player who had achieved so much at domestic level, Cruyff’s international career was something of a disappointment. The Netherlands finished runners-up in the 1974 World Cup having comfortably eased their way to the final by beating Argentina and Brazil; but would fall agonisingly short in the final, losing 2-1 to West Germany.

Even so, in his 48 matches in the orange shirt of Holland, Cruyff found the net 33 times and the team never lost a game in which he scored. However, he also became the first Dutch player to be sent off in his second ever game for the Netherlands as the star was no stranger to controversy when it came to the national side.

As well as successfully campaigning for better conditions for professional footballers he also refused to play a game against Poland due to the fact there was not sufficient insurance in place should he be injured and even had special shirts made for him by Adidas with just two stripes down the arm having signed a boot deal with rival sponsors Puma.

Having helped the national team qualify for the upcoming World Cup, Cruyff retired from international football in October 1977 after a row with the manager, which was typical of the man who wasn’t afraid to make his feelings known both on and off the pitch.

After leaving the Nou Camp in 1978, Cruyff headed to America as the North American Soccer League attracted some of the greatest names in the game; signing a lucrative deal with the Los Angeles Aztecs and being voted NASL Player of the Year in his first season. 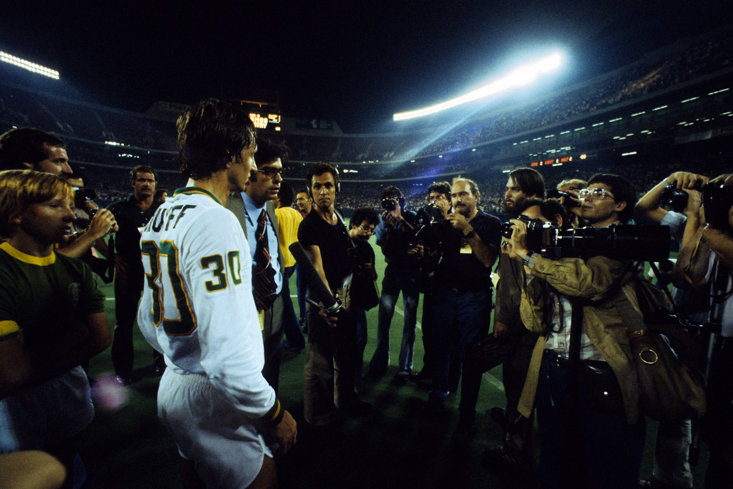 However, one of the greatest players in the world was seen as something of a footballing mercenary in The States, drifting from club to club in an effort to boost attendance levels while being paid handsomely in the process and he soon returned to Europe in 1981 to join boyhood side Ajax once again after something of a disappointing spell with Levante in Spain.

Cruyff won two league titles in Amsterdam but when the club failed to offer him another deal, he signed for arch-rivals Feyenoord instead, and his revenge was sweet as he helped them win the Eredivisie for the first time in a decade as part of a league and cup double alongside a young Ruud Gullit.

After hanging up his boots Cruyff excelled in the dugout in the same way that he had on the pitch and on returning to his beloved Ajax, this time as manager. Cruyff led the side to Dutch Cup success in 1986 and again in 1987, along with the Cup Winners’ Cup thanks to the likes of Marco van Basten, Frank Rijkaard and Dennis Bergkamp who had come through the youth academy.

But it was with Barcelona that Cruyff reached his pinnacle. He masterminded the Catalans’ four consecutive La Liga titles between 1990 and 1994, while he would also win the European Cup against Sampdoria at Wembley in 1992.

Johan Cruyff wasn’t just one of the most elegant and charismatic footballers to ever to play the game, he can also be credited for a playing style that many sides have tried to emulate, but few have succeeded, long before the likes of Pep Guardiola’s ticki-taka at Barca with Messi and Iniesta.

A true maverick to the last, his mantra was simple - if a player wanted to go on a surging run or join a counter-attack then so be it; ensuring each team he played for or managed was a pleasure to watch, while making the game beautiful once again during a period when violence, racism and tragedy in the sport was sadly rife.