Football
News
Five African football nations will qualify for the Qatar World Cup over the next week
Hector Nunns
12:35, 24 Mar 2022

Five African football nations will qualify for the Qatar World Cup over the next week – and among some titanic two-legged play-off ties to savour going into the vital matches there are perhaps two teams with bigger points to prove than the rest.

It was just over six weeks ago in Cameroon that Senegal won the African Nations Cup for the first time in their history on penalties in the final at the Olembe Stadium in Yaounde. Their unlucky final opponents after a goalless draw in 120 minutes? Egypt, led by Liverpool superstar Mo Salah.

It was almost inevitable that the two countries would then be paired together in the final World Cup qualifying round, with the first leg taking place at the Cairo International Stadium on Friday, and the return at the Diamniadio Olympic Stadium in Dakar on March 29th. As Egypt coach Carlos Queiroz put it…”there is now no room for sorrys, or tomorrows”.

The fevered hype surrounding any Egypt game these days is usually about Liverpool’s prolific goal-scorer and this tie is certainly no exception, with a ‘Is he fit, or isn’t he?’ saga in the preceding days. This was largely triggered by his club manager Jurgen Klopp, who left the forward out of his squad - along with Senegal’s Sadio Mane – for an FA Cup win over Nottingham Forest after bringing him off the bench against Arsenal.

With the whole of Egypt hanging on his every word, Klopp explained that “Mo again felt the effects of a knock he got against Brighton so he couldn’t play in the match against Forest, not with any pain. But he should be fit for Egypt.” And that was then confirmed by the Egypt staff earlier this week. Salah will be desperate not only to make it to Qatar, but to then shine as he was not fully fit at Russia 2018. A good World Cup is one of very few things missing on his CV.

Klopp may have done Senegal an even bigger favour, though. The Reds boss got himself into trouble by referring to Afcon as a “little tournament” late last year, though claiming an ironic reference was taken out of context. But taking no chances this time he also left Mane out against Forest, saying: “We won’t use Sadio for the Forest game because his next match coming up is too important in Africa. I don’t want to do things that could be misunderstood.”

Then there is the case of Algeria, spearheaded by their own Premier League hero in Manchester City’s Riyad Mahrez, with goalscoring talisman Islam Slimani up front. ‘Les Fennecs’ came into Afcon 2021 as the defending champions and arguably favourites to defend their crown. 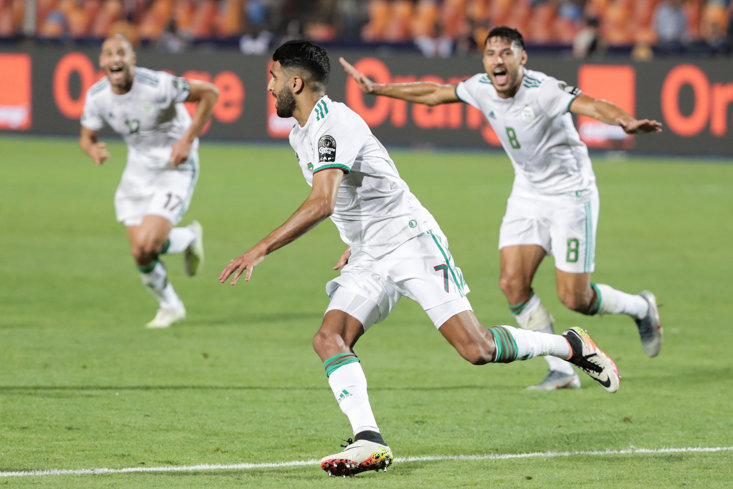 So to finish rock-bottom of a group also containing Ivory Coast, Equatorial Guinea and Sierra Leone with a single point, that fate confirmed with an emphatic 3-1 loss to The Elephants in the final first-phase game, was viewed as a disgrace and an embarrassment back home. The earlier defeat to Guinea ended an impressive 35-game unbeaten streak.

With Cameroon standing in their way in this play-off tie, qualifying for the World Cup for a fifth time would go a long way to repairing the damage done by that dismal campaign in the second-most important tournament for the African countries.

Algeria are perhaps best known in the annals of World Cup history for the disgraceful 1-0 win to West Germany played out at walking pace between that team and Austria in 1982 to ensure that both qualified for the next phase at the expense of ‘Les Verts’.

That infamous travesty was mainly responsible for final group games being played simultaneously, rather than apart. But Algeria made it out of the initial group the last time they qualified at Brazil 2014, and they have been preparing for this tie in Malabo in Equatorial Guinea, just a 25-minute flight away from Cameroon.

There has been noise whipped up in the Algerian press this week about Botswana referee Joshua Bondo, due to officiate the first leg in Cameroon.

He declined to give Algeria a penalty in the earlier group stages against Burkina Faso, and did something similar to Tunisia against the same opponents at Afcon 2021. But the African federation have made it clear Bondo continues to enjoy their full support.

Ghana had a similarly dreadful Afcon, the lowlight of which was a 3-2 defeat to the Comoros Islands and they will be looking to knock out Nigeria – who flattered to deceive in Cameroon and could not build on a good start to the tournament.

DR Congo have qualified just once for the World Cup back in Germany in 1974. But they are up against the more experienced Morocco, who have been there four times including last time out in Russia. Congo, though, have some dangerous players and a couple of London-based forwards in Fulham’s Neeskens Kebano and Brentford’s Yoane Wissa who may have a say in this tie.

Finally Mali, for whom Brighton midfielder Yves Bissouma is the standout player, have seen their chances against Tunisia boosted with the absence due to injury of experienced forward Wahbi Khazri, and defender Dylan Bronn. All ties see the first legs played on March 25th, with the returns four days later.