Football
News
The Gunners gave themselves a much-needed confidence boost ahead of their Europa League second-leg against Villarreal
Kieran Spratt
16:55, 02 May 2021

Mohamed Elneny’s first ever Premier League helped Arsenal return to winning ways after the Gunners outclassed a lacklustre Newcastle United in a 2-0 win at St James’ Park on Sunday.

Having avoided defeat in their last four Premier League games before today, the Magpies looked to have taken a huge step towards safety but after an almost lifeless performance this afternoon, with four games to play and a nine-point cushion, they’ve given Fulham a glimmer of hope, albeit a tiny one.

With Arsenal in midweek action in the Europa League semi-finals against Villarreal heading into this one, the Toon faithful might have been hopeful that Mikel Arteta’s side would turn up in Tyneside on weary legs, but within the first five minutes it was clear that Arsenal meant business, having failed to win their last three in all competitions.

Hector Bellerin cut a cross back to Pierre-Emerick Aubameyang who missed his shot, but the ball spun back to Elneny, who was making his 66th Premier League appearance, just inside the Newcastle area and he coolly slotted it into the bottom corner for his first goal in the competition.

If that goal was expected to give Newcastle a much-needed spark, it never came. Arsenal, cool, calm and composed, absolutely dominated possession and they looked a shadow of the side that were beaten in Spain on Thursday.

Aubameyang, a real boogeyman for Newcastle having scored in both league games and an FA Cup tie this season, wrapped up the three points for Arsenal 25 minutes from full-time. Gabriel Martinelli, who was found in space on the left, sent a wonderful cross to the far post, where the Gabon international latched on to it on the stretch for his fifth goal in five against the Magpies, becoming the first Arsenal player to score in five consecutive matches against an opponent since Olivier Giroud netted in six straight against Aston Villa between 2013-2016. 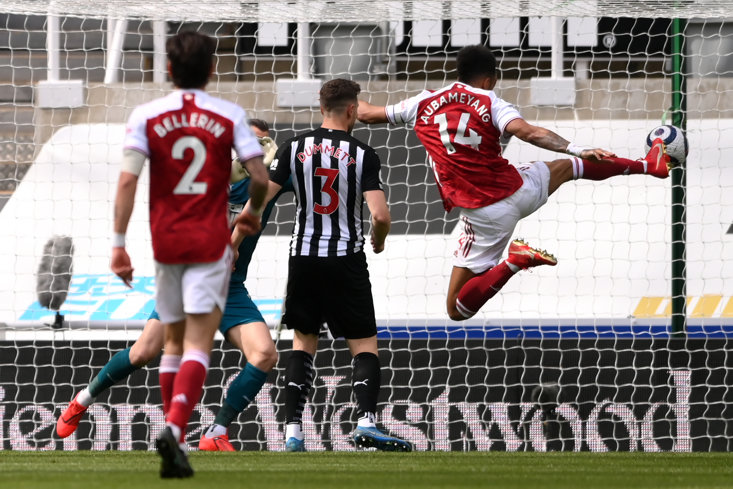 There would be no more goals but Newcastle’s misery was compounded when Fabian Schar was sent off on the 90th minute for an absolutely needless challenge on Martinelli, putting his studs into the Brazilian’s ankles.

The Gunners move up to ninth with the win and give themselves a much-needed confidence boost ahead of the return leg against Villareal at the Emirates next week.

Speaking to Sky Sports after the match, Arteta said, "This game showed our focus is still there in the Premier League. We believe that anything is possible if you're picking up points and we wanted to put bad results out of the way.

"We had a great attitude, some moments of real quality and had total control from the start.”

Bruce, speaking to the BBC said, "We're disappointed because we haven't got near the performances of late. Arsenal played well. It's a poor goal after four minutes. When you're chasing against these lads it's always going to be difficult. Arsenal were the better side today it was as simple as that.

"We are delighted to see we are a bigger threat. Allan Saint-Maximin in the last few weeks has produced all sorts of magic but it wasn't quite there today. We've never thought [we're safe]. We have four games left and we still have a lot to play for. We didn't play well enough today against a decent Arsenal team. We have to regroup, go again and get ready for next week.”