Shaun Wane’s tenure as England head coach started with a 26-24 defeat in controversial fashion against the Combined Nations All-Stars in Warrington on Friday night.

Despite taking the job in February 2020, the pandemic had deprived Wane of the chance to see his side in action following the cancellation of the Ashes series, and this fixture was put in place to provide England with some crucial preparation ahead of the World Cup at the end of the season.

Both Wane and All-Stars head coach Tim Sheens had faced a number of selection headaches, with player availability hampered by Covid-19 and the fact that a full round of Betfred Super League fixtures had been scheduled in for this weekend.

Despite these complications, England came up against a side laced with some of the best players this side of the equator, centred around the 2020 Dream Team half-back Aiden Sezer and 2019 Man of Steel Jackson Hastings.

The All-Stars opened the scoring in the first half through Salford Red Devils winger Ken Sio, before a brace of tries from Liam Farrell, on his first appearance for England since 2016, edged England in front.

England were without a number of their first-choice players with the NRL contingent unavailable to Shaun Wane, and Jonny Lomax and Alex Walmsley missing out due to late injuries, and they looked disjointed at times in the first half, despite encouraging debut performances from Morgan Knowles and Mikołaj Olędzki.

The All-Stars responded with a second try of their own through Peter Matautia and a penalty to take a 14-12 lead into the sheds at half time. 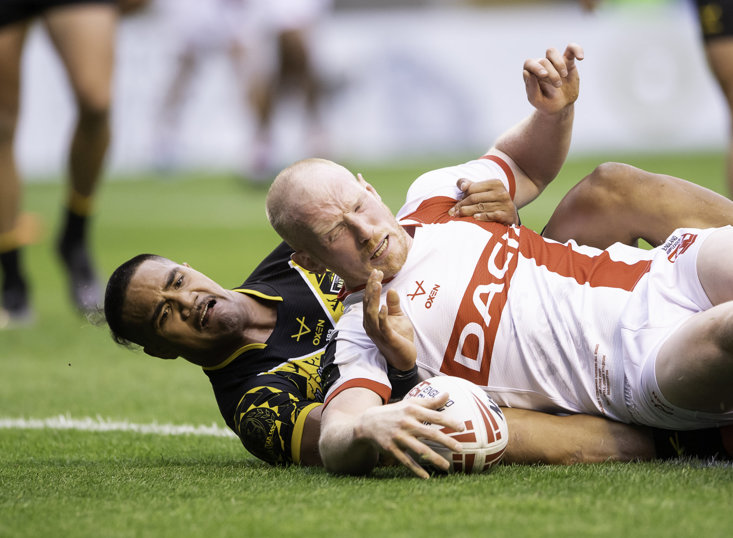 The second half followed a similar pattern with former England international Jermaine McGillvary extending the All-Stars lead, before Knowles continued his strong start to life as an England player with a superb try.

Then came the crucial talking point in the game, as Jake Connor looked to knock the ball on in the air before Ken Sio dotted down, but the video referee awarded the try.

England kept themselves in the game when Tom Davies crossed on his debut, but they were unable to get themselves over the line again, as they fell to a 26-24 loss.

Despite the defeat, Wane was pleased with elements of the performances from his first game as head coach, telling Sky Sports: “There were loads of positives. We played tough and had energy, but didn't have that killer instinct in the last third. Lots of things we practiced, we did. Played a bit dumb at times, could have had more movements, but overall ecstatic about our efforts.”

England now won’t play again until their only other World Cup warm-up game, when they play Fiji in Rochdale in October.