Football
News
The national stadium hasn't made for the greatest of atmospheres since reopening... until now
Conor Keane
08:58, 09 Jul 2021

Gareth Southgate, the man who has united a group of players and a nation, has also united England supporters in a loving embrace with the new Wembley Stadium.

For years after the stadium reopened in 2007, the England faithful could not take to the Three Lions’ new home as much as the historic structure that came before it. The initial stadium’s design, history and propensity to provide a wonderful atmosphere were sorely missed when Wembley first reopened after a substantial construction cost of £789 million. Supporters felt that the arena had lost the aura of the original that had stood as the home of England football since 1923.

There was a great deal of sentiment in losing the old Wembley as it had hosted England’s crown jewel of international success, the infamous 1966 World Cup final in which the Three Lions triumphed over West Germany 4-2 after extra-time. As the years have gone by, an increasingly small percentage of people have been able to remember those events, yet every generation that has followed has grown up knowing of Jules Rimet and 1966 and Bobby Moore.

It has been a rite of passage for English youngsters since that historic summer. Many feel that knocking down and modernising Wembley would also destroy its soul and identity, and for years it felt that England players and supporters could not take to games under the arch with the same sort of joy.

Supporters kept calling for the return of club stadiums to be hosts to Three Lions fixtures in a bid to improve the atmosphere, feeling that having crowds closer to the pitch would have a massive impact. There was also the factor of trying to make England internationals inclusive for everyone and not just those who lived in or could afford to travel to London. In recent years, the FA experimented with it and it did turn out to be as successful as hypothesised, with Leicester City’s King Power Stadium being one of the selected host stadiums for Southgate’s Three Lions ‘on the road’. 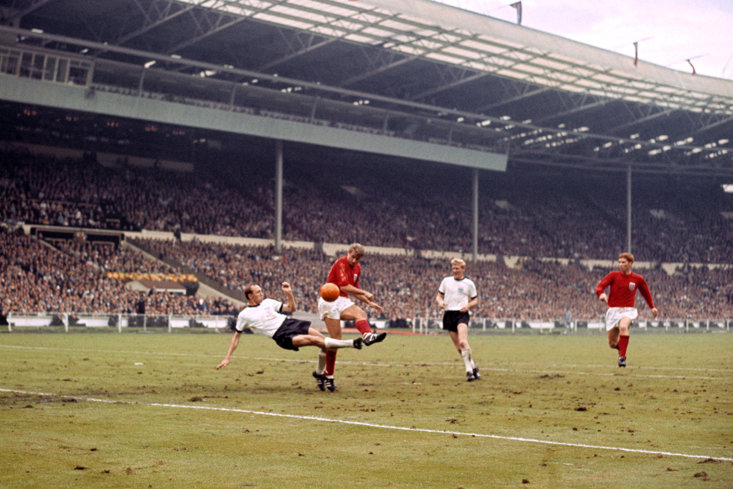 THE OLD STADIUM EXPERIENCED ITS GREATEST DAY IN 1966

The Covid-19 pandemic has been a massive contributor to this new lease of life that we have heard echoing around Wembley. As football fans have been confined and restricted from attending football for the best part of 15 months, the Three Lions’ Euro 2020 clashes at Wembley have provided the perfect environment and occasion for supporters to release their built-up emotions of this past devastating year, and it has helped unite every single person in this country to rally behind Southgate and his squad.

This outpouring of emotion has provided the perfect atmosphere that the new Wembley had not previously seen for England games since its opening 14 years ago. With such a positive attitude towards the group of players and the manager, the Euros has provided the nation with a much-needed spark of positivity to help them cope and move on from the last year and re-embrace the matchday football experience.

This is where Gareth Southgate gets his plaudits. He has worked so hard to give the people of this country a summer they will never forget, and everyone in this country will be eternally grateful. He has made people proud of the national team again and willing to do whatever it takes to get to Wembley. The clips on social media and the background sound of the TV coverage have had fans salivating at the chance of being under the arch for the Three Lions’ next game.

In a period of time when it seemed the world was plunged in darkness, Southgate has shone the light on England and has lifted the spirits of the nation. A new bond has been forged between England supporters and Wembley that is unlikely to ever be broken. And on Sunday, the new structure might well get its 1966 moment.