Football
News
The Parisians were not received warmly after their Champions League collapse
Conor Keane
11:58, 14 Mar 2022

Paris Saint-Germain bounced back from their Champions League humiliation but there were jeers from supporters toward star players Neymar and Lionel Messi, while their former club Barcelona were rampant against Osasuna.

Here are the key talking points from another busy weekend on the continent.

PSG’s 17-minute capitulation to Real Madrid in the Champions League last week led to dissent in the crowd on Sunday despite a comfortable 3-0 win over Bordeaux. There was a frosty atmosphere inside the Parc des Princes as both Neymar and Messi were met with jeers, with the latter being booed when the lineup was read out over the public address system prior to kick off.

Kylian Mbappe was the only member of the famous front three to be heralded by the crowd and he opened the scoring for Mauricio Pochettino’s side. Neymar doubled the lead early into the second half but the celebrations were a cocktail of whistles and applause, with the fans clearly split on the Brazilian’s impact. Messi was instrumental in the goal but a lot of the crowd were getting on his back even when he was in possession. The three points were sealed less than 10 minutes later as Leandro Paredes received the ball on the edge of the box before sending two defenders to the floor with an extra touch before dispatching a shot into the top-right corner. The Parisians maintain a 15-point lead at the top of the table.

Football on BT Sport
@btsportfootball
PSG fans aren't going to forget about the Real Madrid game in a hurry...
Messi and Neymar are met with a torrent of boos as they stand over a free-kick.
Neymar then puts it in Row Z 🙃
136
1097

With Real Madrid waiting until Monday evening to play after their Champions League comeback last week, it was all eyes on Barcelona as Xavi’s rejuvenation at Camp Nou continued. Barca hit four unanswered goals at home to Osasuna, with January signings Ferran Torres and Pierre-Emerick Aubameyang once again proving to be excellent pieces of business.

Torres scored the opening two goals, the first coming from a penalty 14 minutes in after Gavi was brought down inside the box. His second came minutes later following an exquisite pass from Ousmane Dembele, with the Frenchman really starting to grow into the player he was expected to be when he joined the Blaugrana in 2017. He was also the creator for the third, floating an inviting cross in from the right which was poked home by Aubameyang. Riqui Puig finished off the game with a simple finish after initially being denied by the goalkeeper, the youngster reacting clinically to slot home at the second time of asking. Barca have now won four on the bounce as they close in on second-placed Sevilla.

Julen Lopetegui’s side suffered a setback in their title challenge as they were held to a 1-1 draw at Rayo Vallecano. They have now drawn two consecutive matches and three of their last five, drastically weakening their chances of competing with Real Madrid for the league title. Diego Simeone’s Atletico Madrid remain level on points with Barcelona after defeating Cadiz 2-1 at the Wanda Metropolitano thanks to goals from Joao Felix and Rodrigo De Paul. They did suffer a minor setback when veteran striker Alvaro Negredo levelled the scores just before half-time and just managed to hold out after Javi Serrano was shown a red card for a dangerous challenge in the final minutes.

MILAN 9/4 TO WIN SERIE A WITH BETFRED

AC Milan maintained top spot in Serie A with a slender 1-0 victory over Empoli at San Siro, with Pierre Kalulu’s delightful curled effort from the edge of the box proving the difference. They remain four points ahead of rivals Inter, who had Chilean front man Alexis Sanchez to thank for rescuing a late point away to Torino. Simone Inzaghi’s side could have easily slipped five points adrift of the league leaders having fallen behind in the first half after failing to deal with a corner which ended with Gleison Breimer stabbing home from close range. Sanchez’s levelled right at the death with a strike into the far corner after a smart pass from Edin Dzeko.

Second-placed Napoli returned to winning ways with a 2-1 victory away to Verona in which the home side were reduced to nine men in the dying moments. Nigerian striker Victor Osimhen was the hero with a brace as his side stayed within three points of AC Milan. Elsewhere, Juventus moved to within three points of Inter after winning 3-1 at Sampdoria - their third victory on the bounce. Spanish striker Alvaro Morata was on the scoresheet twice after a Maya Yoshida own goal had got Massimiliano Allegri’s side up and running. 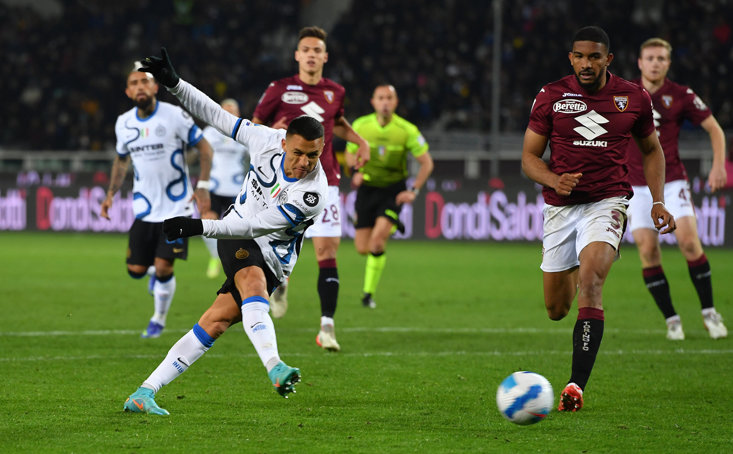 Following their thumping Champions League display against RB Salzburg in midweek, Bayern Munich’s return to league action was a relatively underwhelming affair. They were held to a 1-1 draw at Hoffenheim after finding themselves behind just after the half-hour mark thanks to Christoph Baumgartner’s opener. Bayern were levelled the scores just before the break through the ever-reliable Robert Lewandowski, but in a game in which they dominated possession and had countless chances they appeared to have spent their goal credits for the week against Salzburg.

Their setback was music to the ears of Borussia Dortmund, who were able to close the gap on the reigning champions to seven points with a narrow 1-0 win over Arminia Bielefeld at Signal Iduna Park. Their goal was a lovely move which saw Jude Bellingham find Thorgan Hazard on the right side of the box before the Belgian drilled the ball back across goal for Marius Wolf to fire home.

League leaders Ajax maintained their position at the peak of the table with a dramatic 3-2 victory away to Cambuur despite a late scare. Dusan Tadic opened the scoring in the third minute after he was left unmarked at the back post to fire home from a right-wing cross. They doubled their lead before the break through star striker Sebastien Haller but the hosts pulled one back in the opening minutes of the second half thanks to Issa Kallon.

The home supporters were then sent into a frenzy as Patrick Joosten equalised with 11 minutes to go, leaving Erik Ten Hag’s side rocking. But Ajax were able to regroup and apply more pressure of their own, eventually finding a way to snatch the win at the death as teenage sensation Ryan Gravenberch scored in added time. They maintained their two-point lead over PSV, who also won at the weekend. Eran Zahavi’s second-half strike was enough to give the Eindhoven side the three points away to Utrecht and simultaneously ensure the title race in the Netherlands remains as tight as ever.