Football
News
Exposing The Myth: Why The 1978 World Cup In Argentina Should Never Have Been Played
Simon Lillicrap
12:05, 25 Jun 2019

On this day in 1978, Argentina lifted their very first Jules Rimet trophy after the nation hosted what - in retrospect - looked to be an iconic tournament.

The ticker tape flooded down from the Estadio Monumental, the home crowd was packed in, desperate for success and the original Adidas Tango debuted - still the greatest ball of all time.

But under the surface, this was a World Cup hosted in horrendous circumstances under a brutal regime. As David Winner stated in the Financial Times in 2008: “The more one knows about the 1978 World Cup in Argentina, the more obvious it becomes: it should never have been played.”

Two years before the South American country hosted the tournament there was a right-wing military coup that overthrew the President, Isabel Peron. General Jorge Rafaél Videla, who became the military leader between 1976-1981 said at the time: “As many people as necessary must die in Argentina so that the country will be secure.”

His tenure was a vicious, bloody and brutal regime known as the ‘Dirty War’. Torture and persecution were rife throughout the country. Incredibly, this period of terrorism was supported by the United States in a period where the military forces formed the Argentine Anticommunist Alliance, a group that hunted down and murdered anyone associated with socialism or left-wing politics - as part of ‘Operation Condor’.

‘Disappearances’ were all too common, in total 30,000 people were kidnapped, tortured then murdered as the regime attempted to silence all of their liberal opposition in devastating fashion. A published report went into detail about the torture techniques used at concentration camps - one of which was just a mile from River Plate’s Monumental Stadium, which included rape, the removal of teeth and fingernails, burning with water, oil and acid, prolonged immersion in water and castration.

The World Cup took place in the midst of all of this and was an influential political tool used to demonstrate the strength and positivity of this military regime. There were several comparisons to 1936 Olympics in Nazi Germany, which again was used as a worldwide display of power in a controversial era for the nation.

Putting it simply, they ‘organised’ the tournament so they would win it and the euphoria of the World Cup win extended their stranglehold on the nation for many years. La Abiceleste kicked off with a hard-fought 2-1 win over Hungary but the performance did not please the regime who took things into their own hands.

In Jon Spurling’s book on the tournament, Death or Glory he writes that the Argentina striker Leopoldo Luque was warned by the regime after the win over Hungary. With two tough opponents in Italy and France to play he was told this could become: “A group of death, as far as you are concerned”.

The match-fixing in their next match against France was apparent with the French players claiming that the referee had been talking to the Argentine players saying he might ‘actually have to give a foul’, if they continued to play dirty. 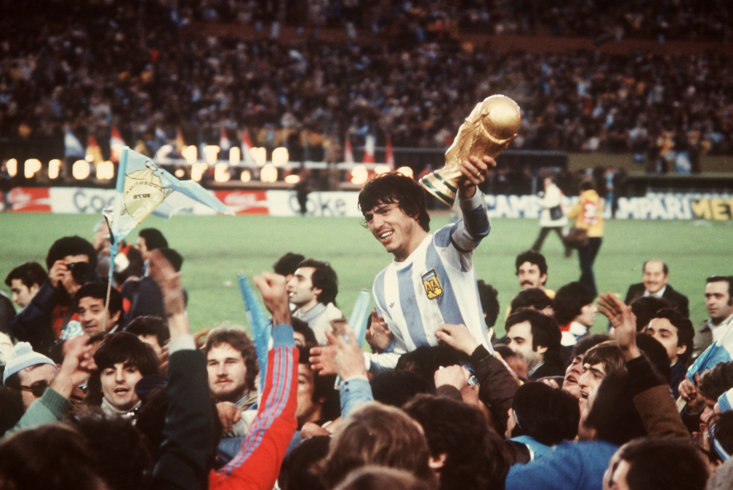 Years later on a French phone in, a muffled voice claimed the Argentines were so high on amphetamines that the players were heard screaming in the dressing room and had to warm down for two hours. When officials were provided with urine samples to analyse from the Argentinian team, they were staggered to discover one of them was pregnant! The samples had actually been provided by the Argentinian waterboy Okambo, who when lacking urine, called on his wife to lend a helping hand. A 1-0 loss in their final group game to Italy meant that they qualified second in the group and were therefore placed into a difficult second round group with Brazil, Poland and Peru.

Other results, including a feisty 0-0 draw against a talented Brazil side meant that in the last game,  Argentina needed to beat Peru by four clear goals to reach the final. Brazil had already played their final group game and conveniently the hosts knew exactly what they needed to do to make it into the showpiece final on home soil. As you would expect, this game was not without controversy.

Thirteen political prisoners from Peru were sent to Argentina to be tortured as part of Operation Condor, but the regime only accepted that group of prisoners if Peru allowed them to win. President Videla, along with the United States Secretary of State and Nobel Peace Prize winner Henry Kissinger both visited the Peruvian dressing room before kick off. The full-time result? 6-0 to the hosts.

So Argentina progressed to the final where they would face the Netherlands, losing finalists from the previous World Cup. The Dutch had impressed throughout the tournament playing a sumptuous brand of total football, but their star man was missing.

Johan Cruyff, the best player in the world at the time, was absent after a kidnapping attempt on his family prevented him from going to the tournament.  "I had a rifle at my head, I was tied up, my wife tied up, the children were in the apartment in Barcelona," he told the Guardian.

“It was the moment to leave football and I couldn’t play in the World Cup after this.”

So Argentina celebrated on home soil after a 3-1 win and the crowd were joyous at the events they saw on the pitch. This World Cup produced some of the most spectacular images we have seen from any tournament and went down well in a footballing sense, but it was also ultimately successful in strengthening Videla’s power in charge of the nation. His reign of terror continued until 1983, when his government was forced to step aside after defeat in the Falklands War to the British.

Perhaps this whole tournament was summed up by Argentine striker Luque who commented over two decades later: “With what I know now, I can't say I'm proud of my victory. But I didn't realise; most of us didn't. We just played football.”