Football
News
Elsewhere, Chelsea put Chesterfield to the sword to book their place in the fourth round
Conor Keane
20:21, 08 Jan 2022

Everton overcame a brief scare against Hull City to progress to the FA Cup fourth round as they won 3-2 after extra-time at the MKM Stadium.

In a nightmare start for the Toffees, Hull were gifted the lead from Everton’s kick-off as Tyler Smith headed home from close range. The Tigers did look bright in the early stages, but Rafa Benitez’s side soon grew into the game and they found an equaliser through Demarai Gray.

The visitors then grew in confidence and started to impose control on the game and they scored a second ten minutes after their first through midfielder Andre Gomes. Hull struggled to test the Toffees defence that were having problems in the earlier stages of the match and it allowed Everton’s control to increase.

After the break, the visitors had an abundance of chances as they dominated but it always felt as though they would come to rue their missed chances. Out of nowhere Hull conjured up an equaliser through a wonderful curling effort from Ryan Longman. Not only did it spark the home crowd into life but also rallied the players in orange – the contest was back on.

The game went beautifully from one-sided to end-to-end, with both sides having chances to take the lead. Keane Lewis-Potter struck the woodwork for the hosts and it was looking like that was the best chance to decide the game as extra-time loomed. A distanced strike from Andros Townsend fired Everton back in front in extra-time as goalkeeper Nathan Baxter should have done better, but that goal would have been a huge relief for Benitez and the Toffees who were able to see out the game.

Match of the Day
@BBCMOTD
A wicked strike from distance from Andros Townsend, but should the Hull goalkeeper have done better?
💻📱 Watch on @BBCiPlayer @BBCOne & the BBC Sport app
#bbcfootball #facup #bbcfacup 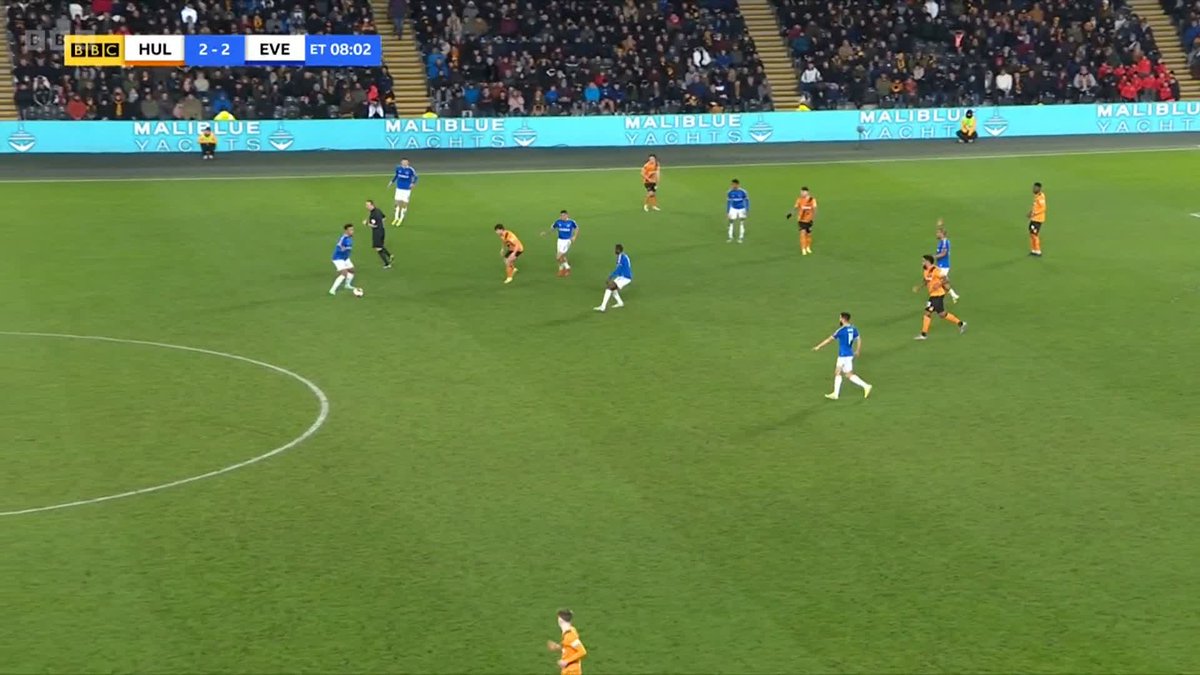 Over in west London, last season’s finalists Chelsea ran out as comfortable 5-1 winners against National League outfit Chesterfield at Stamford Bridge. The hosts took the lead early on as Timo Werner was on hand to tap home after a brilliant run from Mateo Kovacic led to the chance.

The Blues’ lead was trebled inside 20 minutes as Callum Hudson-Odoi was allowed to drift inside from the left before guiding the ball into the far corner to give the non-league side a mountain to climb for any potential upset. The third came immediately after as Romelu Lukaku fired home from close range and that looked to have wrapped up the tie. Chesterfield tried to attack and pull themselves back into the game but Chelsea continually thwarted them on any occasion they made their way into the final third.

Thomas Tuchel’s men were ruthless in possession and they added a fourth to their tally before the break as Andreas Christensen reacted to a loose save with a looping header into the top corner. Hakim Ziyech made it five after the break from the penalty spot after Christian Pulisic was brought down in the box. A stand-out player for Chelsea was youngster Lewis Hall. He was composed on the ball and knew when to burst forward and when to stay back, and regardless of the opposition, he gave a very good impression of himself at Stamford Bridge. Chesterfield did manage to give their travelling supporters something to celebrate as Akwasi Asante scored a consolation goal.

In South Wales, 10-man Southampton defeated Swansea City in a 3-2 thriller in another game that went to extra-time. The Saints were ahead inside 10 minutes through Nathan Redmond and Joel Piroe’s equaliser came late to force an extra 30 minutes of play. Swansea were briefly ahead courtesy of a Jan Bednarek own goal but Mohamed Elyounoussi responded instantly to level the score again. Southampton then regained the lead through Shane Long to wrap up the match.

Elsewhere in the FA Cup’s evening games, League One Plymouth Argyle shocked Championship Birmingham City. The Pilgrims scored the only goal of the game in extra-time to book their place in round four. Bournemouth meanwhile had no problems against Yeovil, beating the south Somerset side 3-1.