Football
News
The Sassuolo midfielder was in magnificent form as the Azzurri marched on
Gary Maiden
21:56, 16 Jun 2021

An all-action display and a stunning brace from Manuel Locatelli saw Italy record their second consecutive 3-0 victory in Group A with Switzerland their latest victims as they marched on into the round of 16.

Locatelli, who dominated from midfield, scored the opening two goals of a game that Italy took control of early on, with Ciro Immobile adding a third with two minutes left to play.

It has been a perfect start for Roberto Mancini, whose side become the first nation to qualify for the latter stages.

While nobody will relish taking on this Italian outfit, it was in fact Switzerland who started with more promise, pressing Italy at every opportunity. However, the first chance of the game fell to the Italians, with Immobile wasting a great chance to add to his strike against Turkey when he headed over following Leonardo Spinazzola’s cross.

It didn’t take long for the Azzurri to open the scoring, or so they thought. Giorgio Chiellini, making a national record-breaking 14th European Championship appearance, swivelled on the ball in the area and drilled home, only for the VAR to controversially rule his effort out for handball.

Replays showed that the decision was a harsh one, and the Juventus man’s night got worse just five minutes later when he had to be taken off with a hamstring injury. Mancini will be hoping that it isn’t anything too serious with his side looking to make a serious impression in the later stages.

The mood was immediately lifted inside the Italy camp when Locatelli finished off a move that he started with incredible precision to send the Group A favourites into a deserved lead.

The Sassuolo midfielder sent a superb volley out wide to Domenico Berardi, who charged towards the byline with intent before cutting back for Locatelli to finish in style from close range.

At 23 years and 159 days of age, Locatelli is the youngest scorer in the tournament so far, and his performance in Rome suggests that we will be hearing a lot about his talents for years to come. 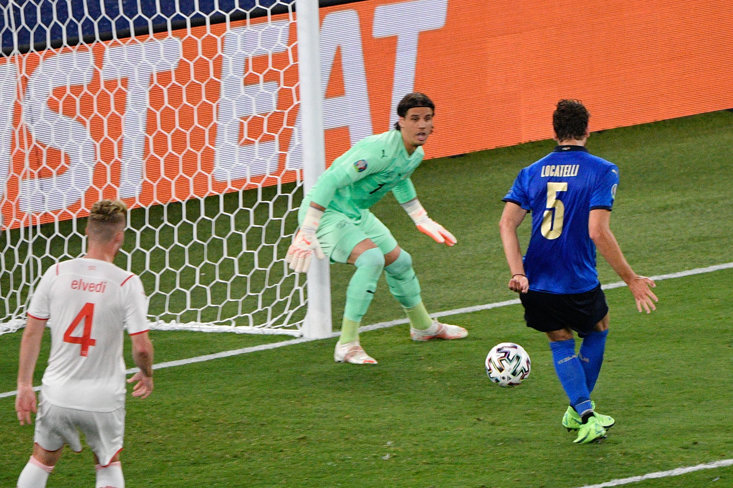 Italy pressed on to kill the game off before the break, with Spinazzola poking his shot wide minutes before the whistle. It didn’t take long for Mancini’s men to double their lead after the break, with that man Locatelli stepping up to the plate once again shortly after the restart.

He picked up the ball just outside of the area and drilled his low shot into the far corner, leaving Yann Sommer with no chance. His second of the night saw Locatelli become only the third Italian to score a brace at the Euros following Mario Balotelli’s against Germany in 2012 and Pierliugi Casiraghi against Russia in 1996.

Not content with sitting on their lead, the 2006 world champions kicked on looking for yet another 3-0 victory, and it came with two minutes left on the clock when Immobile put the icing on the cake.

This new-look Italy will take a bit of stopping, with the defensive sides of old now replaced with a vibrant and pressing side who don’t give their opponents a moment on the ball.

In fact, such is their dominance right now, they have scored 58 goals in their last 19 games, while conceding just three. Dutch midfielder Donny van de Beek was the last player to score against the Italians in October 2020.

Can a confident Wales manage that feat when Group A’s two unbeaten sides meet in Rome on Sunday? They’ll have their work cut out against a rampant Locatelli and co.