With the football season now a matter of weeks away and the transfer merry-go-round in full swing, it also means that millions of people around the world are once again gearing up to take a crack at Fantasy Premier League. The game that has reached fanatical new heights in recent years is back with managers attempting to cram Erling Haaland, Harry Kane, Heung-min Son, Mo Salah and Raheem Sterling into the same team.

It may be impossible to create the perfect squad from the off, but that hasn’t stopped the best and the brightest footballing minds at The Sportsman from having a crack.

Simon Lillicrap - The Overconfident One

As always, I’m pretty happy with my team heading into the first week. Trent and Salah are must haves, as is Joao Cancelo, while I’ve plumped for Harry Kane over Erling Haaland, but will likely switch between the two as the season progresses. Marcus Rashford could be a gem at £6.5m, Pedro Neto could catch fire at Wolves and Luis Diaz showed exactly how good he was last season.

Aymeric Laporte is in for now,  but only because I want to see how Chelsea’s new-look defence pans out before plumping for Ben Chilwell or Reece James at the same £6m price point. Neco Williams and Andreas Pereira are two must-haves in your squad to free up funds. At £4m and £4.5m respectively, they should both get plenty of gametime this season. 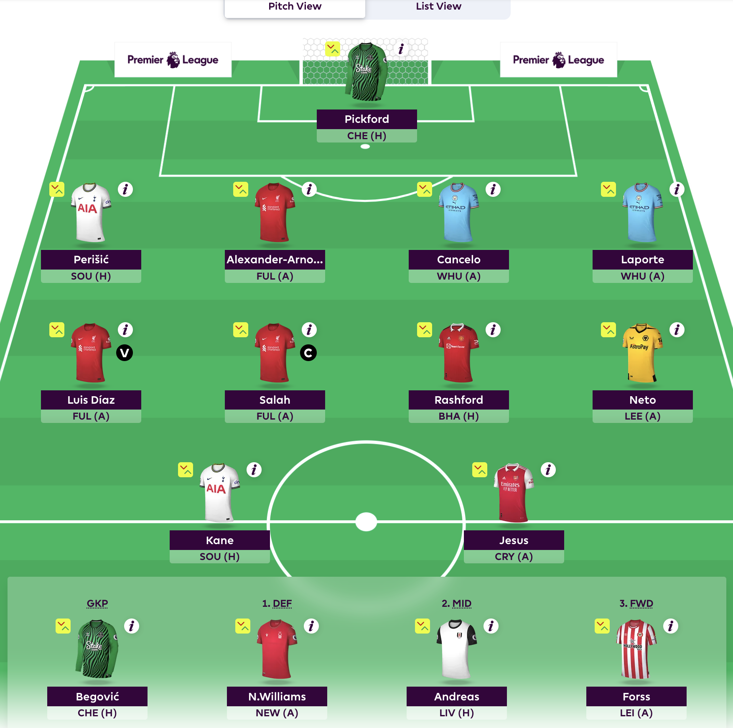 Ryan Wood - The Risky One

Patrick Bamford over Kane and Haaland? Don't laugh until you hear me out. Son and Salah are must-haves this season and I want them both. They shared the Golden Boot and won more points than any other players in the game last season, and no new signing can convince me they are a better option early on. Riyad Mahrez covers Manchester City in my squad and I'm backing Rashford to have a good start to the season under Erik ten Hag. Trent and Ruben Dias will bring points from my defence - and hopefully that Bamford decision pays off up top... 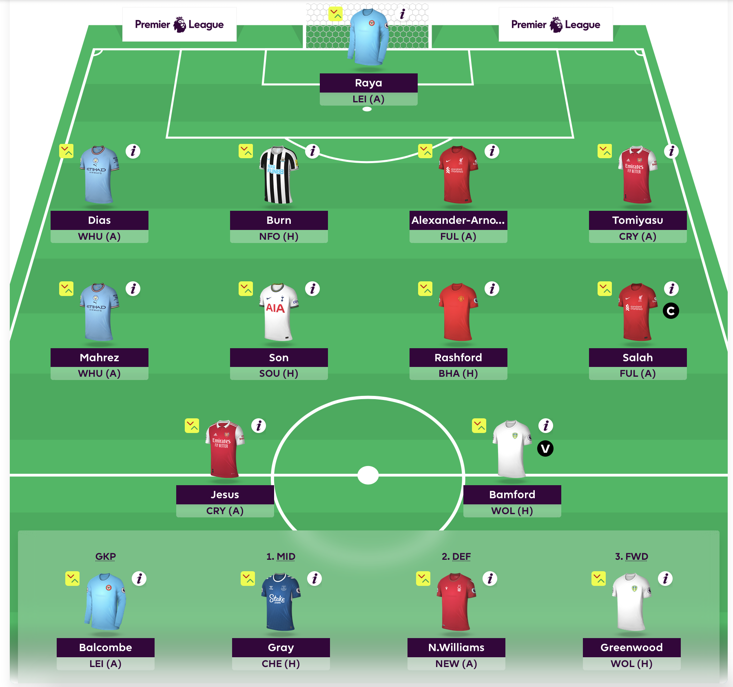 Sam Penfold - The Ambitious One

A balance of experience, proven point scorers and unknown youth forms my 15-man squad. The big guns of Haaland, Salah, Son, Jesus and Alexander-Arnold eat into the budget leaving very little room for navigation elsewhere in the side. Rashford, Jack Harrison and Matty Cash all hold the card of "potential to score highly" while Nathan Patterson, Carney Chukwuemeka and James Justin are hopeful bids with the latter returning from an ACL injury late last season. Ben Johnson I believe will be starting for West Ham as their RB hence the inclusion on the bench. 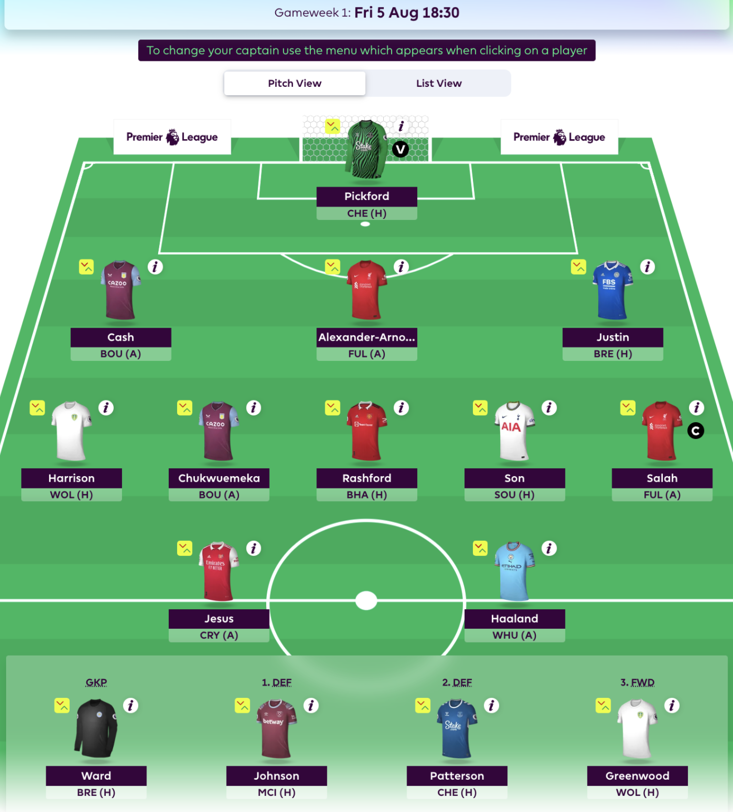 Conor Keane - The Naive One

People might laugh at me for not picking the highest points scorer of the last three seasons in Salah, but in other years where I have largely gone for the stars in midfield and attack leaving a weak defence, it hasn't quite worked.

This time around I've included Alexander-Arnold, Joao Cancelo and Tottenham's new man Ivan Perisic because I think they will contribute points both defensively and offensively. Son shared the Golden Boot with Salah last season and I feel he could have another prolific year in front of goal, as can Mahrez who scored 11 himself last term.

While Kane is a proven goalscorer at this level I felt I had to jump on the Haaland and Jesus train because I am expecting both of them to have a huge impact at their clubs this year. 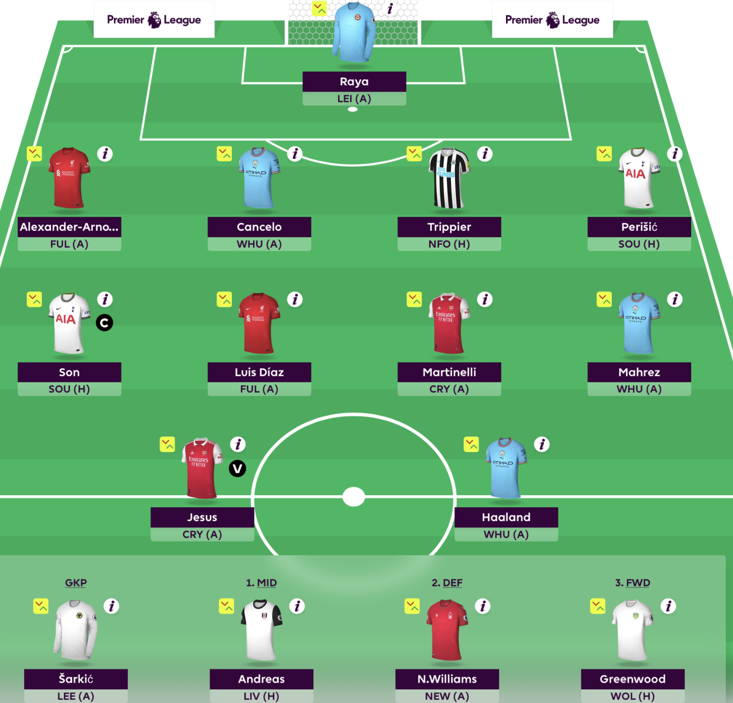 x
Suggested Searches:
The Sportsman
Manchester United
Liverpool
Manchester City
Premier League
More
football
Lure Of A Move Away From Rangers Could Prove Impossible To Resist...
Ryan Kent is no stranger to a bout of poor form - but uncertainty surrounding his long-term future has [ ... ]
football
Harry Maguire And John Stones Ruled Out Of Manchester Derby
Manchester United’s Harry Maguire and Manchester City’s John Stones have been ruled out [ ... ]
football
Road To Wembley Part 5: Marske Desperate For Cup Run After Vandals...
The Sportsman's Road to Wembley has taken us up to Marske United and after their win over Whitby [ ... ]
football
England Fans Could Do With Learning Germany's Lesson And Cut...
The day after Monday’s chaotic draw with Germany marked the sixth anniversary of Gareth Southgate’s [ ... ]
football
Christopher Nkunku Has Secret Chelsea Medical: Where He Would...
Christopher Nkunku is continuing his fine form from last season in the Bundesliga this term as he has [ ... ]
football
Who Is Newcastle United's New Striker Garang Kuol?
Newcastle United have agreed a deal to sign highly-rated striker Garang Kuol from A-League side Central [ ... ]
football
LIVE Football News: Domestic Football Returns With A Derby Weekend
Welcome to The Sportsman's LIVE football blog, where we will have you covered for all the biggest [ ... ]
football
FIFA 23: The Five Career Mode Saves You Need To Try
FIFA 23 is finally upon us. The last instalment in EA Sports’ three-decade strong franchise, it [ ... ]
football
Why Do We Love Our Football Club - Part Four: The History, Trophies...
In this five-part series, The Sportsman will be exploring one of football's biggest questions. Just [ ... ]
football
Uefa's Concussion Ignorance Is Putting Footballers In Serious...
Oh, the Uefa Champions League. That pinnacle of club football, with its unwieldy restructure in order [ ... ]
football
The Next Man In: Saints To Task Legend Wellens With Emulating...
St Helens will make club legend Paul Wellens their new head coach, tasked with emulating the stunning [ ... ]
football
EPL TV Money Could Be Spread Around The World: CEO's Ideas For...
After battling through qualifying, F.C. Copenhagen returned to the Champions League group stages this [ ... ]
football
Fantasy Premier League Gameweek Nine: Wildcard Mayhem And Liverpool...
After a long international break, Fantasy Premier League returns this weekend with a full [ ... ]
football
LIVE Football Blog: Team News Expected For Club Football's Return
It's Thursday, which means that there's not too much on the TV in terms of football tonight, [ ... ]
football
Why Do We Love Our Football Club - Part Three: The Kits, Colours...
In this five-part series, The Sportsman will be exploring one of football's biggest questions. Just [ ... ]
football
The Top 10 Teenagers From Europe's Top Five Leagues So Far In...
Football is filled with teenage talent. There are currently so many incredible young players in senior [ ... ]
football
The Fantasy Premier League Stars Who Look Set To Miss Out On...
A video circulating around social media on Tuesday night has left Fantasy Premier League managers fearful. [ ... ]
football
How Mocked Manchester United Full-Back Gary Neville Became The...
Manchester United’s treble-winning squad in 1999 was packed full of talent. From Peter Schmeichel [ ... ]
football
How Cristiano Ronaldo And Lionel Messi Can Meet In The World...
Cristiano Ronaldo or Lionel Messi. That is the football civil war of the ages that has divided supporters [ ... ]
football
Who Are The Most In-Form Teams Heading To The Qatar World Cup?
That’s it. The last international break before the World Cup in Qatar has passed and teams will [ ... ]
football
Everything You Need To Know About The Euro 2024 Qualifying Draw
Following England and Wales’ relegation from the UEFA Nations League A during the most recent [ ... ]
football
LIVE Football News: Attention Turns Back To Club Football
Welcome to The Sportsman's LIVE football blog, where we will be bringing you all the latest news [ ... ]
football
Are Any Of England's U21 Starlets Close To A Shock World Cup...
Lee Carsley has quietly gone about improving England’s U21 side. After the Aidy Boothroyd era [ ... ]
football
The Ghosts Of Vicarage Road: Watford's Treatment Of Managers...
As inevitable as a lying politician or a Michael Buble Christmas album, Watford FC have sacked their [ ... ]
football
Scotland Secure Nations League Promotion Thanks To Dogged Defending
Scotland have done it. They have been promoted to UEFA Nations League A after they secured a hard-earned [ ... ]
football
Why Do We Love Our Football Club - Part Two: The Stadium
In this five-part series, The Sportsman will be exploring one of football's biggest questions. Just [ ... ]
football
Former Chelsea Midfielder John Obi Mikel Retires From Football
Former Chelsea midfielder John Obi Mikel has announced his retirement from football. The Nigerian has [ ... ]
football
England v USA Squad: Lucy Parker And Jess Park Earn First Lionesses...
Sarina Wiegman has recalled Fran Kirby and Euro 2022 final hero Chloe Kelly to the England squad, while [ ... ]
football
Jude Bellingham: Birmingham City Fans Knew He Was Destined For...
Across the whole of Europe right now, there is one player on everyone’s lips. Jude Bellingham [ ... ]
football
Out Of Time: The World Cup Is Arriving At The Worst Moment For...
World Cups are supposed to be in summer. They just are. But sometimes a break from tradition can be [ ... ]