Football
News
We have picked the five most interesting games to watch on Sky Sports
Conor Keane
15:10, 27 Jul 2022

Domestic football returns to our lives and our TV screens this weekend and we cannot wait for the rollercoaster of emotions that the next nine months will bring. It’s that stage of the season where most supporters around the UK are optimistic for the campaign ahead though there will be some, of course, fearing the worst.

Nonetheless, the matchday camera lenses have been wiped and Sky Sports are raring to go as they prepare to deliver the first handful of matches of the 2022-23 season - and we’re particularly excited.

The EFL and Scottish campaigns commence this weekend and we have decided to pick out five matches worth watching on Sky Sports to help see you into the return of club football.

Who doesn’t love a Friday night game under the lights to get the ball rolling? There has been a lot of change for both these clubs over the summer break. Huddersfield painfully missed out on the Premier League in the play-off final and have since lost manager Carlos Corberan and key players Lewis O’Brien and Harry Toffolo to Nottingham Forest.

As for Burnley, former Manchester City captain Vincent Kompany is their new boss and there has been a personnel shake-up at Turf Moor as he looks to change their identity. This match seems like a fitting curtain-raiser for the feast of football to come both this weekend and throughout the season.

This Saturday evening clash pits two promotion hopefuls against one another as Chris Wilder and Steve Bruce take charge of their first full seasons at their respective clubs. Middlesbrough drastically improved under Wilder when he replaced Neil Warnock last term and West Brom have recruited well this summer to strengthen Bruce’s chances of getting a record-extending fifth Championship promotion on his CV.

The opening match gives no real indication of where a team will be by the end of the year but with the ambitions that both these teams will have, they know how much a strong start can do for their plans. 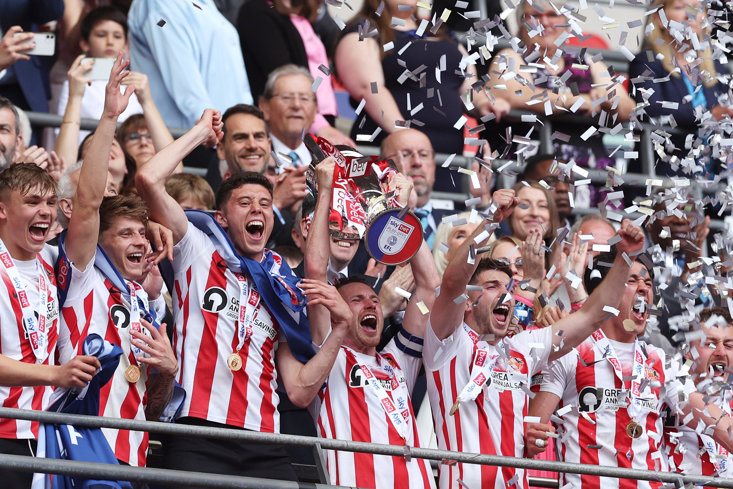 Sunderland were promoted via the League One play-offs

Sunderland’s return to the Championship starts with a home clash against Mark Robins’ Coventry. The Sky Blues had an enjoyable campaign last time out and some people are tipping them to have a strong crack at the play-offs this time around. For the Black Cats, their first priority will be to stabilise themselves back in the second tier, which shouldn’t be too difficult given their squad, manager and resources.

This game will serve as an indicator as to where both these clubs are after the summer break. Watford have a fresh face at the helm (nothing new there) in Rob Edwards who is expected to revolutionise the way they play football, while Sheffield United will look to go one step further from their play-off semi-final adventure in 2021-22. Another fascinating contest live on the box.

The Hoops get their title defence underway at Celtic Park against Aberdeen, and manager Ange Postecoglou feels his side have to be stronger than last year if they are to retain their champion status. There have been some interesting arrivals at Paradise, including the permanent returns of last year’s loanees Cameron Carter-Vickers and Jota.