Marcus Rashford wasn’t even supposed to be playing on the night his life changed. Anthony Martial was warming up ready to start for Manchester United against FC Midtjylland in the Europa League round of 32 second leg back on 25 February 2016 when he felt his hamstring go.

Wayne Rooney was already missing, ruled out for six weeks with knee ligament damage, while Will Keane’s promotion to the first team had lasted only five minutes of an FA Cup tie at Shrewsbury before he left the field with a groin injury. James Wilson, meanwhile, was on loan at Brighton, leaving United having to do without their four senior strikers and in desperate need of goals after being humbled 2-1 in Denmark the previous week.

Their only option was an 18-year-old kid who was among the substitutes for only the third time and had not a single minute of first-team action to his name. We know him these days as Marcus Rashford: Manchester United forward, England star and inspirational child poverty campaigner.

He hadn’t come out of nowhere, exactly. Rashford had been scoring with great regularity for United’s under-18s team that season, and had netted twice on the opening day of the under-19s’ UEFA Youth League campaign away to PSV just a few months before. But the Midtjylland second leg fell only 11 days after he had made his first start for the United under-21 side.

Wilson, Keane and Nick Powell – the latter then loaned to Hull City – had all had spells until then as the under-21s’ lone striker as Warren Joyce’s side replicated the 4-2-3-1 formation used by Louis van Gaal at first-team level, and it was only when injuries bit and players were hastily promoted into the senior squad that Rashford had even been earmarked to spearhead the 21s. 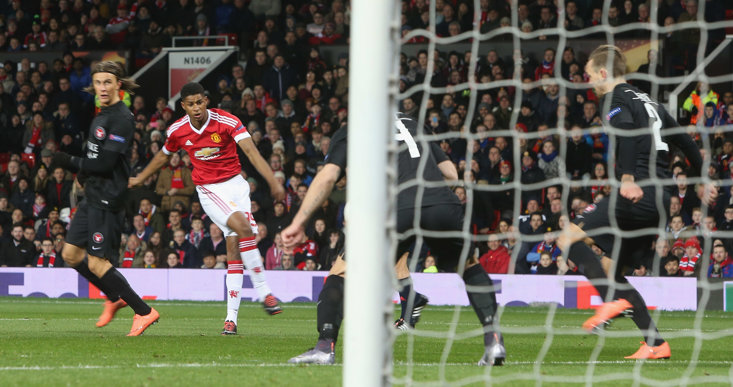 So it was something of a speedy rise up the ranks for Rashford as he stepped out to start in Martial’s stead that night at Old Trafford, the crisp new No. 39 jersey on his back, his youth teammates cheering him on from the Family Stand, and the Midtjylland players looking to complete the most unlikely of upsets.

We know that they didn’t, of course, even if they did extend their aggregate lead thanks to Pione Sisto in the first half. Nikolay Bodurov’s own goal had levelled the scores on the night and then the main event happened early in the second half as Rashford pounced on Juan Mata’s cut back to even up the scores on aggregate.

There was more to come 12 minutes later, as Guillermo Varela’s cross from the right found Rashford in space at the far post and the 18-year-old coolly slotted home the goal that put United ahead overall and finally tilted the tie in the Red Devils’ favour. Ander Herrera and Memphis Depay would add late goals, but it was Rashford who was the matchwinner.

He would later explain that the sudden nature of his call-up helped him to deliver on opening night.

“It was a shock to be playing because Martial was supposed to be starting, and coming in kind of benefited me because I wasn’t thinking about it, thinking about the game too much, so it’s just been good.”

Better was to come just a few days later when the front man hit two more goals on his Premier League debut against Arsenal in a 3-2 win, but as we now know there was far more where that came from. He has netted 85 goals for Manchester United and 11 for England over the last five years, and in the last 12 months has become known for his admirable campaigning for underprivileged children.

It’s hard to believe it has only been five years. Marcus Rashford has already made one hell of an impact.