Football
News
Football League Play-Off Statistics: Is It Really Better To Finish Third Or Has The Tide Turned In Recent Years?
Simon Lillicrap
11:04, 06 May 2019

The play-offs are now just around the corner after a thrilling end to the Football League season. We now know who will be playing each other in the most exciting games of the year as a whole campaign of hard work and effort comes down to just two semi-finals and one final in each league.

Three out of the four teams will fall at the wayside before one winner from each division is crowned. It really is the best way to win promotion, you get the drama of the semi-finals before a day out at Wembley and the elation and relief at the final whistle is euphoric.

But are you more or less likely to win the play-offs depending on what position you end up in the league? We’ve put the nerds in our office to work and delved into the statistics to come up with the facts and figures surrounding those magical play-offs.

The play-offs were introduced back in 1987 as a way to spice up the promotion race and they have certainly worked. Now teams can finish sixth (or seventh in League Two) and still have a chance of gaining promotion whilst those teams that finish third can miss out despite being inches away from finishing in the automatic promotion spots. It may not be ‘fair’  but it certainly is exciting.

Well, the results are in and although it may be a psychological disappointment to finish in third (fourth in League Two) and miss out on automatic promotion, the teams that finish in that position win the play-offs more often than any other side. 36.66% of the time, the side that finishes third will win promotion which is a way higher figure than any other position. 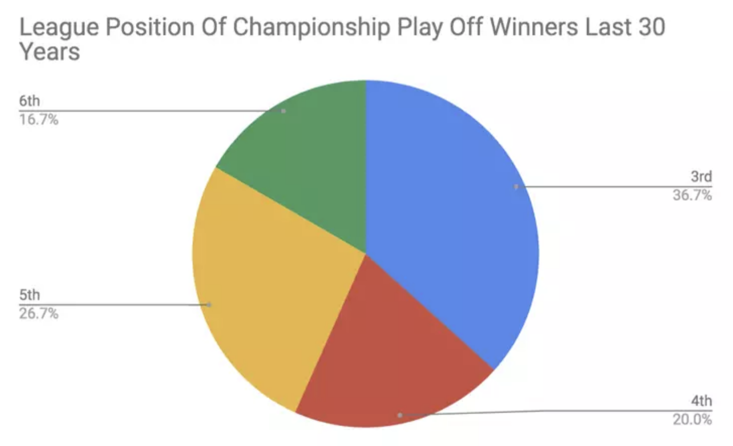 If we just focus on England’s second tier, the team that finishes third has been promoted 11 times in 30 years. Fourth place has finished as winners just six times, fifth is slightly more successful with eight wins, whilst sixth is the worst position to finish, having won the play-offs just five times.

In League One it is much more even, third place is still the most successful with nine wins, fourth has eight, fifth is the worst place to finish with just five wins, whilst sixth also has eight successes. Last season Rotherham who finished fourth last season beat Shrewsbury Town who finished third and only just missed out on the top two. That is the brutality of the play-offs and it is so gutting to miss out on promotion at Wembley after a season of success. 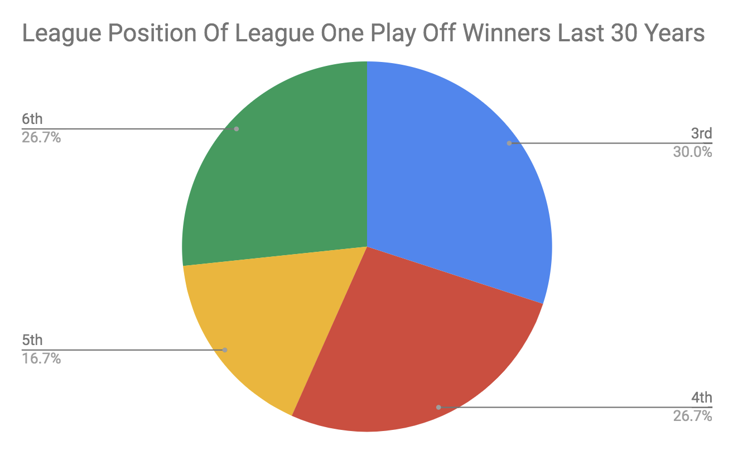 Down to League Two and fourth (equivalent to third in the other two divisions) is also the most successful place to finish. 13 times in 30 years they have been promoted whilst the sixth-placed teams have been promoted seven times. Fourth and fifth have just five wins apiece. In their first season in League Two, Coventry City finished in the top six of any division for the first time in 46 years last season and won the play-offs with a convincing 3-1 win over Exeter at Wembley.

As mentioned above, the tide seems to be turning especially in League One and League Two. Over the past three years in the bottom two divisions, no side finishing in the spot below the automatic places has achieved promotion whilst four times in the past three seasons the team finishing in the final play-off spot has won the whole thing. 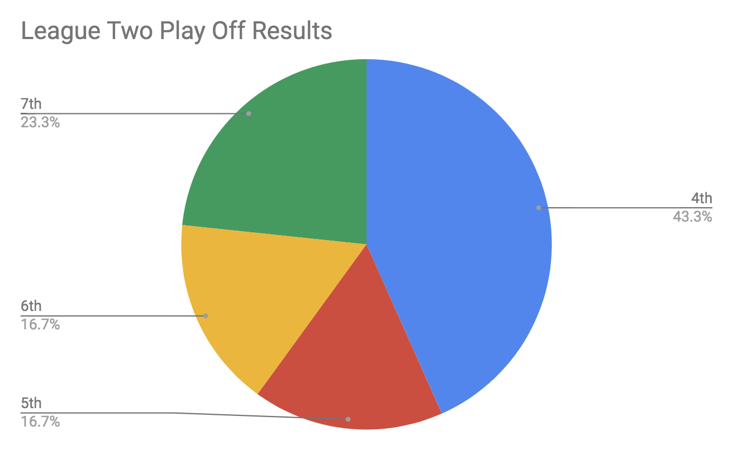 It certainly looks as if the tide has turned over the past few years. Momentum is now so important in these crucial games and the quality of the sides competing in the end of season competition is often so similar. As you can see from the graph below, depicting the whole of the Football League, more often than not, the team that has finished lower in the league has won promotion in recent years! 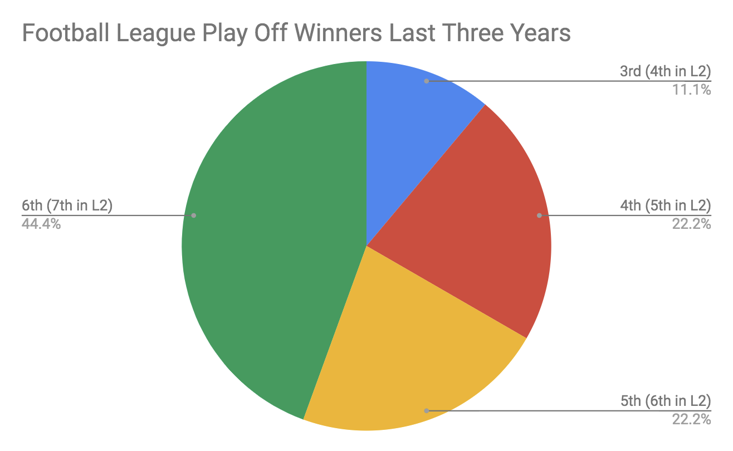