When the Premier League season gets to March and there is more than one team that has a realistic chance of taking top honours, it is considered an enthralling title race.

That may be true, of course: English football’s top flight would not be a multi-billion, global brand if it did not have a couple of decent perks.

If one is asking for guaranteed drama, relentless unpredictability and grand-stand finales, however, look no further than League Two.

Wycombe Wanderers stayed up on the final day in 2013-14 at the expense of Bristol Rovers, whose fans had celebrated on the Adams Park pitch the week before.

The following year, Wycombe (again) lost the Play-Off Final on penalties to Southend, after a sickening 121st-minute equalizer, then Accrington Stanley missed out on promotion to Bristol Rovers on goal difference, with the Gas going up thanks to a 96th-minute goal.

The year after, the Play-Off Semi-Finals alone produced 22 goals, then Stanley cantered to the 2017-18 title with a bottom two budget, before MK Dons pipped Mansfield to promotion in 2018-19 by beating them on the final day.

Every season throws a different, unique story and this one is bigger, better and more brilliantly bamboozling than ever before.

In the promotion race, just six points separate 2nd-placed Exeter from 10th-placed Mansfield, so it would only take two gameweeks to turn the entire promotion picture upside down.

League Two Central
@league2_central
Forget the Premier League title race!
The League Two promotion race could not be tighter!
6 points separate 2nd and 10th (games in hand mean it could be less!)
All these sides still hopeful of getting autos, but 3 won't even make play offs!
#EFL #LeagueTwo #SkyBetLeagueTwo 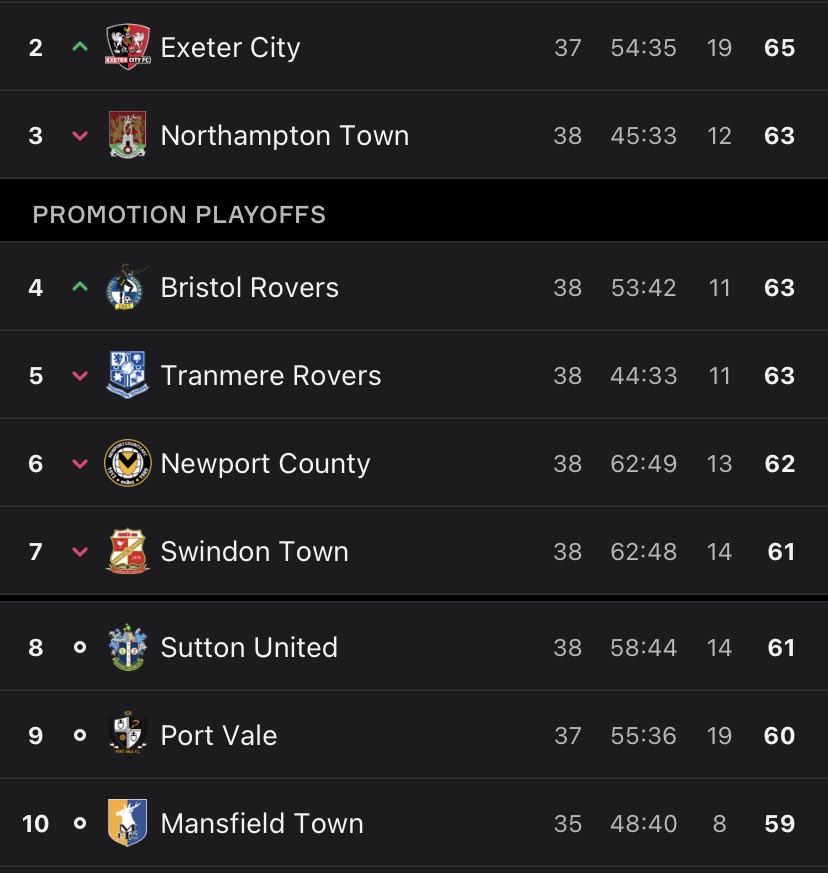 To make matters more intriguing, the Stags have two and three games in hand on all their promotion rivals, possessing the third-best points per game rate in the division at 1.69, so the automatic promotion race and the Play-Off scramble are closely entwined.

It is not beyond the realms of possibility, even, that the final day will arrive and there will be team(s) that could still either go up automatically, or miss out on the top seven, which would be the most incredible conclusion to a season ever seen.

If current PPG returns remain, we would see Exeter and Mansfield go up with Forest Green, with a meagre two points separating Northampton, Tranmere, Bristol Rovers, Sutton, Swindon, Newport and Port Vale, who would in that scenario be jostling for a Play-Off spot.

There is reason to think, however, that the rest of the season may pan out differently to how PPG projections suggest.

Gabriel Sutton
@GabSutton
77 points is the projected requirement for automatic promotion from League Two this season.
If accurate, it would be the lowest tally for a top three side in that division since John Beck's Lincoln amassed 75 in 97/98.
2
16

Firstly, Exeter have been decimated by injuries in midfield, with the absence of key man Timothee Dieng impacting Matt Taylor’s approach for Tuesday’s goalless draw at Port Vale.

The Grecians will be hugely reliant on Dieng’s fitness for the run-in and they have a very difficult set of fixtures: four of their remaining nine opponents are among the contenders mentioned above.

Mansfield, meanwhile, must play 11 games in 42 days, which will have a bearing on Nigel Clough’s selection policy and while the depth is there in abundance, tactical consistency and the avoidance of fatigue cannot be achieved simultaneously.

Not only that, the Nottinghamshire outfit have still got to play leaders Forest Green twice - Rob Edwards’ troops will not have secured promotion by early April’s meeting – on top of key clashes with Northampton and Sutton.

By contrast, Swindon have only one fellow promotion contender in Newport left to play, if we assume that Forest Green will already be up by the time they make the short trip to the County Ground.

Ben Garner’s side have been affected by injuries of late, losing Peterborough loanee Joe Tomlinson at left-back as well as talented forward Louie Barry, but both are expected to return for Saturday’s hosting of Rochdale.

Those re-introductions could re-balance Town, who have missed Tomlinson’s technical ability as well as Barry’s lively movement in an attack that is otherwise short of pace.

The Aston Villa loanee forged a fabulous forward trio with Josh Davison and Harry McKirdy in February, when Swindon hit 11 goals in three games, and if they can get back to those levels against favourable opposition, then a top three tilt is on the cards.

Swindon have the joint-best goalscoring record of the teams in the mix on 62, tied with Newport County - and that’s not where the similarities end.

Garner got the head coach job based on his reputation as a youth and Under-23s coach, having endured a difficult stint in senior terms previously at Bristol Rovers and it’s a comparable story for James Rowberry.

The Exiles boss worked his way through the ranks at Cardiff, where he was extremely highly-regarded, and has since made his mark in his new corner of South Wales.

Rowberry has built on the firm foundations laid by Michael Flynn whilst bringing innovative ideas to the table, such as inverted wing-backs and heavy rotations in midfield, turning County into a chance creation machine – a dream for the division’s top goalscorer, Dom Telford, to play in.

Neither Rowberry nor Garner, however, has experienced high-stakes football as a manager or been asked to work through the unique challenges of high-pressure games, which is a significant factor.

That could put either at a disadvantage up against Tranmere boss Micky Mellon, who has already won four promotions in his managerial career, with Fleetwood and Shrewsbury as well as back-to-back successes in his first spell in charge of his current club.

Nigel Clough, meanwhile, steered Burton to promotion from League One in 2015-16 and Matt Gray led Sutton to top spot in the National League last term, with both achieving their respective triumphs against the odds.

Plus, Matt Taylor at Exeter and Joey Barton at Bristol Rovers might not have won promotion as a manager yet, but both have suffered heavy Play-Off defeats and will have learnt a lot from their respective experiences.

The Gas have form on their side, which counts for everything: having languished as low as 16th in December, Barton’s troops have accrued a whopping 40 points from their last 18 games to put them very much in the mix.

The January signing of Elliot Anderson has been crucial to the Rovers resurgence, with the Newcastle loanee bringing sharp movement, quick feet and top level talent to the side.

DAILY BRFC
@Dailybrfc
👥 TEAM NEWS
Elliot Anderson is available for selection against Carlisle United, despite being called up to the Scotland U21 squad.
Great news 😁!
#bristolrovers 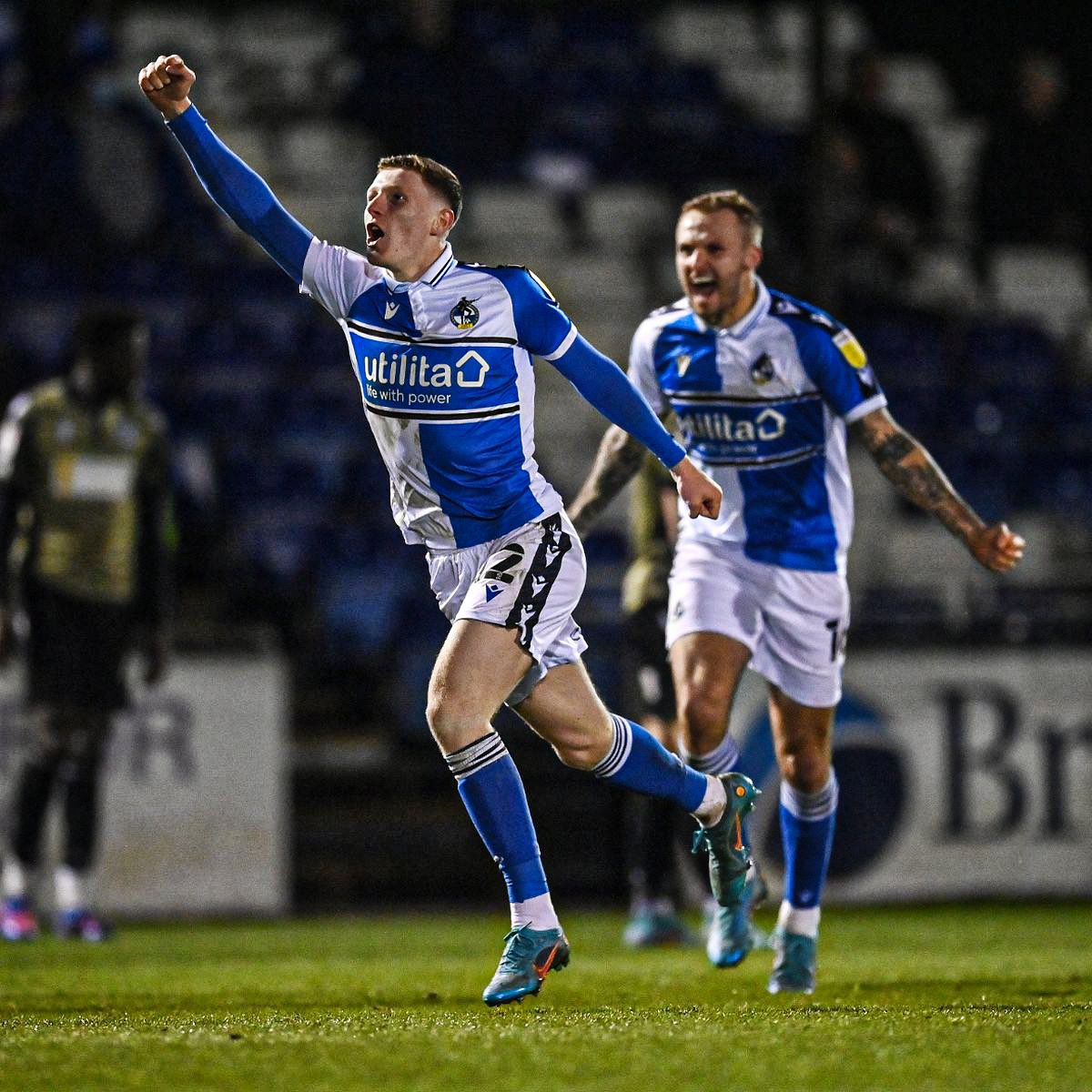 Anderson’s impact, combined with the form of false nine Aaron Collins – 10 goals in the above timeframe – means attention is taken away from key man Antony Evans.

Rovers might be below third-placed Northampton by virtue of a solitary goal but after they defeated the Cobblers on their own turf last week, it is hard to see them not leapfrogging their promotion rivals.

Jon Brady’s side have kept 17 clean sheets this term and defensive solidity has been a crucial aspect of their challenge, likewise with a threat from set pieces, but going forward they have not been the same proposition since losing Tottenham loanee Kion Etete.

In fact, it would not be a huge surprise to see Northampton miss out on the top seven altogether along with Sutton and possibly Port Vale, who would need to cement their place before concluding their campaign with potentially dicey meetings with Newport and Exeter.

The Valiants are in a difficult situation, led in an interim period by Andy Crosby, as manager Darrell Clarke continues his compassionate leave.

Clarke has been absent due to a family bereavement and has the condolences of all at The Sportsman, because some things in life are more important than football and this is one of those things.

From a footballing perspective, it is hard to avoid the notion that Clarke’s return to the dugout would significantly boost Vale’s promotion chances.

Clarke knows how to handle big occasions, but of course he must deal with his own personal, familial challenges before anything else.

Our prediction? Exeter and Bristol Rovers go up automatically with champions Forest Green, before Tranmere, Mansfield, Swindon and Newport do battle in the Play-Offs.

Then again, this is League Two so… who knows what will happen?