Sadio Mane is embarking on a new adventure with Bayern Munich, having ended his six-year love affair with Liverpool last week. The Senegalese star is one of the German giants’ marquee signings of the summer as they look to strengthen their grip on the Bundesliga and bolster their Champions League chances.

On Monday morning, Bayern confirmed that the 30-year-old will don the number 17 shirt, an unconventional digit for a star player on paper, but one that has been worn by some club legends down the years. We take a trip down memory lane to see who Mane will be looking to live up to or emulate over the next few years in Bavaria.

The towering centre-half was an integral part of Bayern’s recent surge of success. Although he is no longer plying his trade at the Allianz Arena, he firmly became a fan favourite when he joined them from Manchester City in 2011, enjoying a decade with Die Bayern. He won nine consecutive Bundesliga titles, five DFB-Pokals and two Champions Leagues. He left behind quite a legacy.

When a player becomes Bayern’s first non-German club captain, you know they were special. Dutchman Van Bommel was a superstar defensive midfielder who joined the club having enjoyed success with PSV Eindhoven and Barcelona. He joined the club for just €6 million and proved to be a bargain. He instantly announced himself, offering strength in the middle of the pitch in his debut campaign in 2006-07. He then became captain the following year, replacing Oliver Kahn. He helped Bayern to two domestic doubles in 2007-08 and 2008-09. 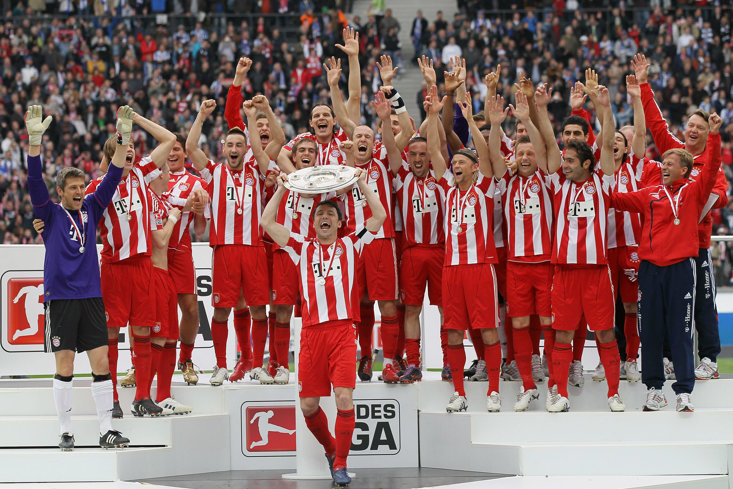 The German left wing-back was a stellar player for Bayern between 1990-97, scoring 46 goals and providing 41 assists across all competitions. Ziege was just as effective at the back as he was going forward. His left foot was remarkable and he was quite a specialist from set pieces. He showed excellent form for Bayern and during his seven-year spell he won two Bundesliga titles and a UEFA Cup.

The defensive midfielder spent seven years at Bayern, firstly as a mainstay in the lineup before losing his place in the side in 2002 and then getting moved to the club’s reserve team in the third tier. However, at his height he was instrumental in the middle of the pitch for Bayern and he helped the club to four Bundesliga titles, three DFB-Pokals and a Champions League.

All these players established themselves as legends at the Allianz Arena and Mane will be hoping that when he leaves, he will be departing with similar status. He inherits the shirt which was vacated by midfielder Michael Cuisance in January who left for Venezia after his move from Borussia Monchengladbach didn’t quite go as either party would have liked.

Mane now has the chance to restore glory to the number 17 and given his success at Liverpool, it seems inevitable that he will.

x
Suggested Searches:
The Sportsman
Manchester United
Liverpool
Manchester City
Premier League
More
football
David De Gea Has Become Manchester United's Unmentionable Problem...
Manchester United have so many issues at the moment but as they come up against Brentford this weekend, [ ... ]
football
Shunned By Top Six Clubs, But Maybe Not England: The Potter/Howe...
As Graham Potter clapped the visiting fans at Old Trafford after Brighton’s first win away at [ ... ]
football
Steven Gerrard Or Frank Lampard: The Never-Ending Debate Turns...
It was the argument that tarnished England’s Golden Generation for a decade. It should have [ ... ]
football
100 Days To Go Before The World Cup We Never Thought We'd See
In 100 days’ time, the 2022 Fifa World Cup will kick off… we think! After the recent hasty [ ... ]
football
Sergio Gomez: Who Is The Left-Back Closing In On Manchester...
It has been a busy few months at Manchester City this summer. The club have sold a number of players [ ... ]
football
After PSG Approach, Should Marcus Rashford Consider Leaving...
The most appealing thing about Marcus Rashford is the way in which he keeps his roots close to [ ... ]
football
Raheem Sterling Reveals Why He Left Manchester City For Chelsea
Chelsea attacker Raheem Sterling has opened up on the reasons behind his Manchester City exit in the [ ... ]
football
LIVE Transfer News: PSG In Talks For Manchester United's Marcus...
The transfer rumour mill is in full swing, plenty of big stories to keep our eyes on today. One of the [ ... ]
football
How An Australian Influx Has Helped To Transform The Scottish...
Embarking on a life-changing adventure on the other side of the world is a daunting prospect for any [ ... ]
football
The Five Most Transferred-In Players In Fantasy Premier League...
Chances are, if you didn’t have Erling Haaland in your FPL team last weekend, you’ve joined [ ... ]
football
If The EFL Won't Do Something About The Carabao Cup, We're Better...
We need to talk about the Carabao Cup. In a first round slate featuring 16 giant-killings, the elimination [ ... ]
football
Harvey Elliott Handed New Long-Term Contract By Liverpool
Liverpool have handed young midfielder Harvey Elliott a new five-year contract until 2027. The 19-year-old [ ... ]
football
Everton's One That Got Away: Ancelotti Just Keeps Winning Big...
Carlo Ancelotti and Real Madrid have picked up where they left off. A 2-0 win over Eintracht Frankfurt [ ... ]
football
Millie Bright Signs New Three-Year Contract With Chelsea
Millie Bright has signed a new three-year contract with Chelsea that will see the defender’s association [ ... ]
football
Why Manchester United Fans Have Always Been Opposed To The Glazers
Manchester United are a mess, it is clear to see. There have been problems going on in the background [ ... ]
football
LIVE Football News: Frenkie De Jong Transfer Saga continues
Welcome to The Sportsman's LIVE football blog, where we will be bringing you all the biggest news [ ... ]
football
Begging Barcelona's Financial Incompetence Disgraces The Club's...
Ah, FC Barcelona… the club of Lionel Messi and Johan Cruyff, of Hristo Stoichkov and Carles Rexach. [ ... ]
football
Rachel Daly's Move To Aston Villa Can Help Level The WSL Playing...
Fresh off the buzz of England’s Euro 2022 triumph, one of the heroic Lionesses has returned to [ ... ]
football
Shot In The Dark: Manchester United's Doomed Search For A Centre...
Take a piece of paper and write down the names of any striker you can think of. Don’t bother with [ ... ]
football
Shamrock Rovers' European Adventure Will Benefit The FAI's Long-Term...
It was a magical night in Skopje, North Macedonia on Tuesday night for League of Ireland side Shamrock [ ... ]
football
World Cup Set To Start One Day Earlier So Qatar Can Play In...
The men's World Cup in Qatar is set to start one day earlier than planned on Sunday 20 November [ ... ]
football
Who Clocked The Fastest Speed In The Premier League This Weekend?
One week into the Premier League season we have Tottenham Hotspur winning the league, Arsenal back to [ ... ]
football
LIVE Football News: Manchester United Up Their Interest In Cody...
Welcome to The Sportsman's LIVE football blog, where we will be bringing you all the biggest transfer [ ... ]
football
The King’s Coronation: When Kenny Dalglish Signed For Liverpool...
When Kevin Keegan departed Liverpool at the end of the 1976/77 season he left a huge void to fill, but [ ... ]
football
Ibrox Delivers Again As Rangers Stage Another Epic European...
It’s happened again. Another European night at Ibrox, another incredible comeback. Rangers needed [ ... ]
football
Manchester City or Liverpool: Who Are The Bookies Tipping for...
The Carabao Cup returns to action on Tuesday night as the first round of the historic cup competition [ ... ]
football
The Departure Of Timo Werner And Chelsea's Misspent Summer Of...
Timo Werner has left Chelsea, returning to RB Leipzig for a £25 million fee, £20 million [ ... ]
football
Which Big-Six Team Boasts The Best Front Three In The Premier...
One of the biggest talking points when it comes to the Premier League is who has the best attack. This [ ... ]
football
Any Ambitious Manager Would Have Made The Same Captaincy Call...
Sami Hyypia saw the positives of losing the Liverpool armband to Steven Gerrard in 2003. “I still [ ... ]
football
The Ibrox Factor: Rangers Will Be Boosted By Home Form In Europe...
There will be plenty of nerves kicking in around Glasgow today as Rangers take part in the second leg [ ... ]