Those bemoaning that most European leagues have ended as virtually predicted eight months ago- with square pegs going in to square holes in Germany, England, Spain and Italy- mustn’t be aware that a most interesting title challenge is currently taking place over in Turkey in the Super Lig between the Four Teams of Istanbul. Just four points separate the top four of Galatasary, Fenerbahçe, Beşiktaş, and İstanbul Başakşehir; three universally recognised names and and an audacious contender ready to gatecrash the party.

With three games of the season left to play, all teams assured of Europa League football next season, a single individual slip can alter the whole balance of the current order. Understandably, all four teams still retain varying degrees of hope of achieving the most coveted prize in Turkish football. Any dropped points will be detrimental, and hopefully for the neutral the championship will go right down to the final games of the season, on Saturday 15th May.

TFTV Turkish-Football
@TurkFootballTV
With three games to go, the Turkish Super Lig is on a knife edge! 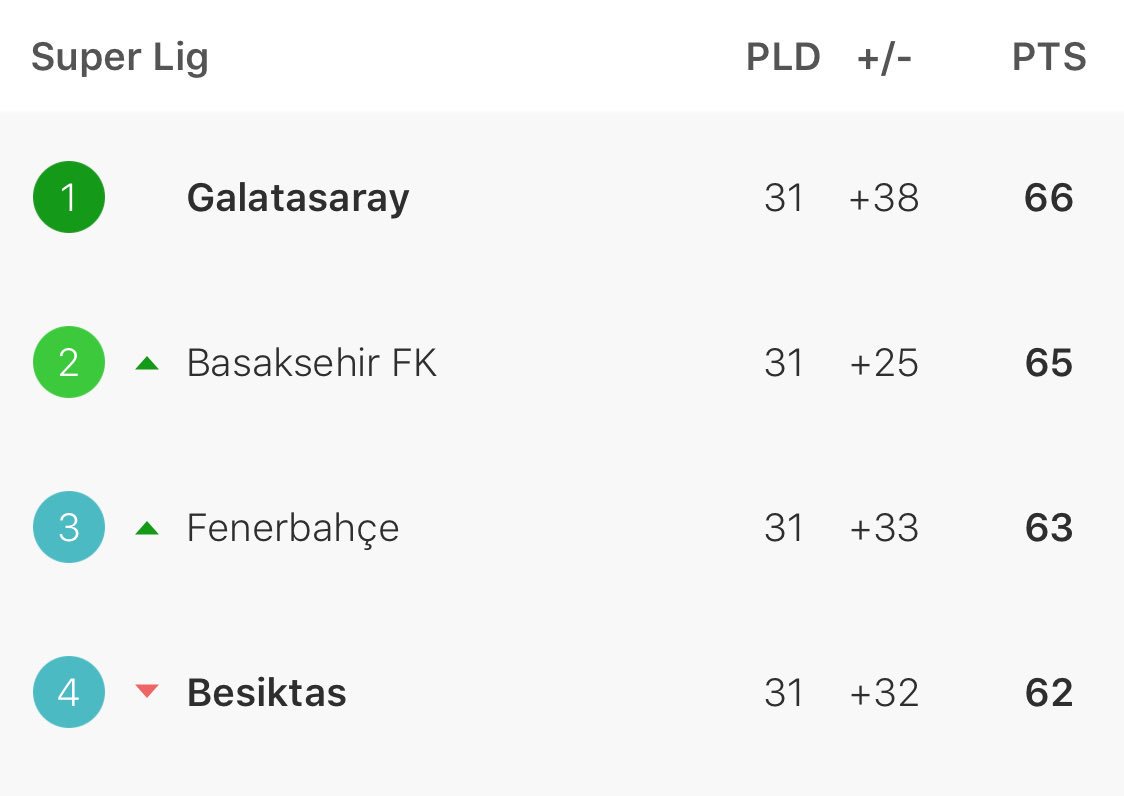 Following the tumultuous reigns of Jan Olde Riekerink and Igor Tudor, who only managed 18 months between them, legendary manager Fatih Terim is back pulling the strings at Galatasaray for the third time. The Emperor has pulled them back to the top; the most successful manager in Galatasaray’s history on the verge of winning his seventh title with the most successful team in Turkish football history.

A front-line led by ex-Lyon/ Swansea striker Bafétimbi Gomis has reaped rewards, and is a rather remarkable turnaround and a credit to their legendary manager since taking over in December. Gomis has recorded 27 goals this campaign in 30 appearances, missing just one game.

However, their remaining fixtures might not prove to be as straight-forward as they read on paper. The first of their remaining matches may prove trickier than generally expected. Akhisar Belediyespor hadn’t managed anything more than a draw over Galatasaray in over two years, and a win in almost five, yet recently recorded a famous 3-2 aggregate win over them in the Turkish Cup. Galatasaray also have to play two of the most recently promoted teams who are both having excellent seasons. Goztepe are sixth whilst newly-promoted Yeni Malatyaspor recorded a shock 2-1 win over Galatasaray at the Malatya Arena in the reverse fixture.

Such is the tumultuousness of the league at the moment, that Galatasaray, following their dramatic win over Besiktas last weekend, find themselves top despite having lost the most games out of their immediate rivals.

İstanbul Başakşehir, in their relative infancy, are on their way to emulate their strong showing last season, when they finished second behind champions Beşiktaş. This year, they’ve kept pace and are now agonisingly close to winning their first ever title, of which they would be only the sixth team to do so. A club only 28 years old can finally break the monopoly held by the so-called ‘Big Three’; the last time being in the 2009-10 season when Bursapor beat Fenerbahce by a single point, the first instance of the triptych being fractured in 26 years. A hair’s breadth away from leaders Galatasaray, they’re in a strong position to capitalise on any dropped points from the twenty-time winners.

The one bump might come against Kasımpaşa on the final day of the season. Recent years have recorded this as a tight game, plenty of 1-1s or the winner decided by a single goal, the exceptions coming last season went Kasimpasa returned a 3-1 defeat to Basaksehir with a 4-0 demolition of their own at the Recep Tayyip Erdoğan Stadyumu.

Although the lowest scoring team of the four, they have former Arsenal/ Manchester City player   Emmanuel Adebayor, who has returned an admirable return of fifteen goals this season. Gael Clichy is also a familiar face for Premier League on their roster.

Fenerbahçe have been the chief bridesmaid of the Super Lig in two of the past three seasons and  have been determined not to make happen yet again. Although third in the league, a defeat for the current leaders and their own substantial win could reduce the goal difference significantly to bypass Galatasaray,.

Fenerbahçe could also manage a surprisingly double, if they are officially granted passage to face Akhisarspor in the final of the Türkiye Kupası. It is due to be played at Diyarbakır Stadium in a week’s time. Whether this extra fixture congestion hinders their title challenge remains to be seen.

Fenerbahçe have a Spurs forward line of Vincent Janssen and Roberto Soldado but it is the Brazilian Giuliano who  has been making it count. He has almost double the amount of goals for his club than his nearest teammate.

It was only the 2-0 win by Galatasaray over them at the Türk Telekom Stadium last week that has meant last season’s champions Beşiktaş have fallen behind the pack to fourth. Unfortunately for Beşiktaş, though they certainly a have mathematical chance for the championship it would now require an almighty capitulation by the three teams in front of them.

They currently have the best defensive record in the league, yet since selling Cenk Tosun to Everton means they have lost their goalscoring prowess. Last year’s Super Lig top goalscorer Vagner Love only has a return of seven for the champions since moving from Alanyaspor in January and Beşiktaş have suffered as a consequence.

They are also still smarting from what they perceive as the injustice of being ordered to play in an Istanbul Cup Derby replay against Fenerbahçe following the original fixture’s cancellation. Beşiktaş refused to take to the field, after the initial game was cancelled due to disruption from fans and coach Şenol Güneş was hit by a coin from a crowd.

Beşiktaş arguably have the most difficult run out of the four contenders to boot, managing only the slenderest of victories in the reverse fixtures against Sivasspor and Osmanlıspor and a draw against Kayserispor. Osmanlıspor will also most likely be a tough challenge, seeing as they are at the last chance saloon to escape relegation.

Remember the days of Graeme Souness planting a flag in the centre circle of the Fenerbahçe pitch whilst managing Galatasaray, and jump back on the bandwagon for the final, hopefully exhilarating, unpredictable last stretch of the domestic season. Turkish teams are notoriously unafraid to wear their hearts on their sleeves, and this weekend’s fixtures come in the aftermath of the midweek postponement of the Turkish cup semi-final replay between Beşiktaş and Fenerbahce which has generated considerable debate and attention on the state of football in the country.