“Get inside my head for 10 minutes and you’d want to get out.”

Daryl Powell was the most sought-after coach in the Betfred Super League when Warrington Wolves secured his services last year. But just five months into his first season the former Castleford boss admits he’s riding a fierce mental storm to work out what the hell is going wrong.

Warrington reached four Grand Finals between 2012 and 2018 and lost the lot. Highly-rated Powell was brought in to change all that. But this year the nearly men are nowhere near. 10th to be precise. Star men have departed – prop Chris Hill leaving one of the biggest holes – as Powell set about moulding a new-look Wolves squad to play his style of rugby league. But even he didn’t think it would take this long.

They head into a daunting Magic Weekend showdown against big-hitting Catalans Dragons with just one win in their last seven and only six victories all year.

“It’s been tough, absolutely. If you know me you know what I think about losing, I think it’s overrated.”

Powell bared his soul to The Sportsman this week with brutal honesty. Super League’s longest-serving coach is as passionate as they come, and as confident as he remains in putting things right, the 56-year-old is hurting.

“We have to stay positive and focused and it’s not easy. 100 % it’s not easy. Once you come through adversity they always say it makes you stronger. It never feels like that when you are smack bang in the middle of it but it has to make you stronger. It just does because you have learned another lesson of being in a situation that is very difficult.” 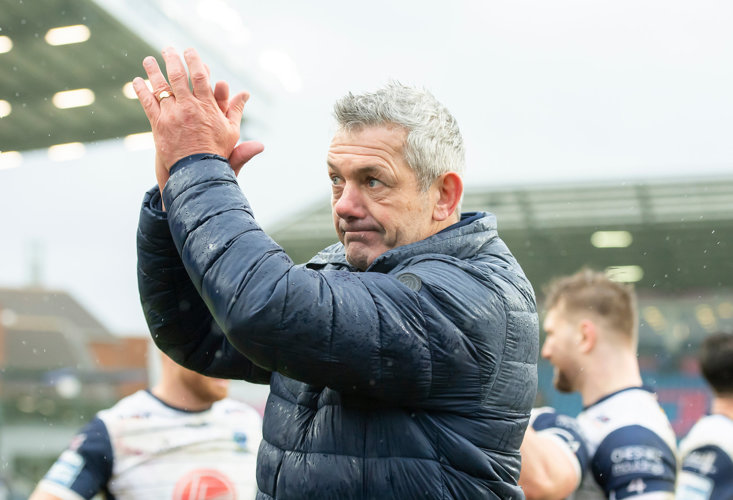 Powell and his players have been getting pelters from angry Warrington fans who were well within their rights to expect another crack at a Grand Final. Players have confronted disgruntled supporters in the stands after defeats, with the Halliwell Jones Stadium becoming a strangely unhappy place to both watch and play rugby league.

“The one thing I don’t do is social media,” Powell adds.

“Heaven sent the fact that I don’t see any need to listen to what fans are saying.

“I appreciate that fans pay the money, the people that come to the ground and really commit to supporting us, and I’m with them. I want things to look a certain way and at the moment they don’t. There’s different reasons for that that I won’t go into.”

The Wolves coach met a fans panel recently in a bid to both hear their frustrations and explain his own.

“I said ‘if you hate losing and you’re thinking badly about where we are at, then just get inside my head for 10 minutes and you’d want to get out'.

“I am massively passionate about everything I do in this sport, I’ve been doing it for a long time and believe the game should be played in a certain way. And we aren’t doing that at the moment.

“I know there is a fair bit of flak about but I need to keep doing the job and make sure everyone knows exactly where we are going.”

Powell hasn’t given up on the playoffs, which on the face of it appears hugely unlikely – not only because of their league position, but more because of the way they are playing. Only Wakefield and Toulouse lie below the Wolves, with six points the gap to the bottom of the table. So is it unthinkable to suggest Warrington are actually in a relegation fight?

“I don’t think we should worry about that. That just adds more pressure, we just have to concentrate on winning the next game and grow what we are doing. I understand what people are talking about but I haven’t even thought about that and I’m being dead honest there.

Powell insists there are positives in even the most difficult of experiences if you look hard enough, and has urged the club’s fans to trust him to deliver.

“Ultimately I think what we have done with retention and recruitment moving forward is exceptional. In the fullness of time you will see that, but this year has been difficult and we have to battle and fight hard.

“Rugby league is a tough sport and we are being put in some tough situations, but as coach of the team I have to continue to see the positives of where we can get to.”