Football
News
The Welshman started and scored as Spurs came from behind to beat Southampton...
Simon Lillicrap
20:02, 21 Apr 2021

In Ryan Mason’s first game in charge, the Gareth Bale mystery at Tottenham took another turn. The player who just could not get going under Jose Mourinho looked free once again to play some of his best football. In the absence of the injured Harry Kane, he was Tottenham’s main outlet, and not just because of his goal on the night.

"We need to be on the front foot a bit more, we're a big team with great players and we need to attack more and stay higher up the pitch more," he said after the game, a clear sign he was frustrated with Mourinho's management.

His movement was sharp and his crossing was threatening too as Spurs came from behind to beat a much-improved Southampton side 2-1. It now remains to be seen what happens for the remainder of the season, as the player himself is fully-prepared to return to Madrid and see out the final year of his contract.

He was one of the components of a side who looked willing to fight for their new boss. A teammate of so many of this squad, Mason seems to be benefiting from a group of players who have had the chains taken off. The last fifteen minutes in particular was a marked improvement from what we had been watching under Jose Mourinho in recent weeks.

In north London, Southampton were fully in control for the opening half an hour and created the clear openings. Only a terrific double stop from Hugo Lloris kept the scores level as he first denied Mohammed Salisu’s close range header, before getting back up to brilliantly parry Che Adams' follow-up. It was remarkable goalkeeping from the World Cup winner to keep the scores level in the opening exchanges but he could do nothing about Danny Ings’ opener.

James Ward-Prowse whipped in one of his trademark set pieces and the England striker was on hand to guide the ball in off the post, with an excellent header. Spurs, despite the change in the dugout, look as lacklustre as before, with little excitement being produced from the front three of Gareth Bale, Hueng-Min Son and Lucas Moura.

Ings had looked the liveliest forward on the pitch however the hamstring injury he picked up early in the second half will be of great concern to Ralph Hassenhuttl. It also likely means he will fail to make Gareth Southgate’s England squad for the Euros as the injuries that have plagued him for his entire career return once again. 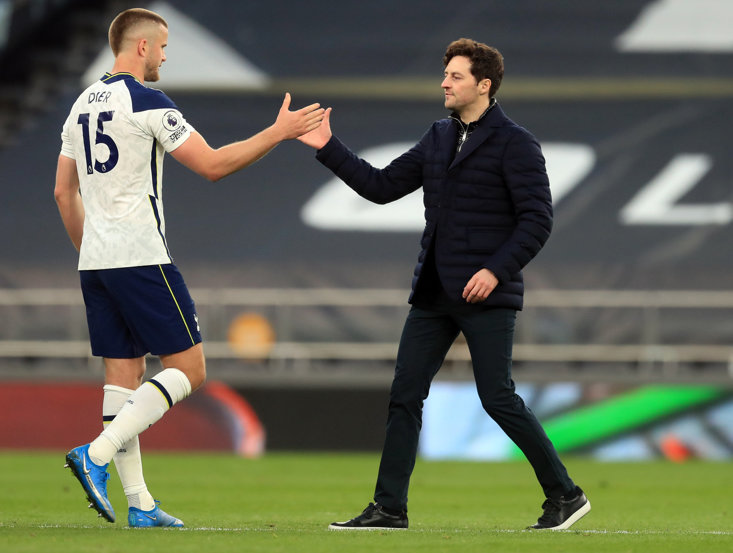 One man who will be hoping to star again this summer for his country is Bale. His telling contribution was Spurs’ equaliser as he curled the ball wonderfully into the top right corner to bring his side level. If there is a player that needs to feel loved, it is Bale, and perhaps Mason’s interim appointment could see the best brought out of the Welshman once again.

It was a much-improved second half display from Tottenham who finally looked as if they had understood Mason’s message at half-time. The players looked more composed on the ball while the 29-year-old’s substitutions appeared to re-energise the side, as Harry Winks in particular, another man outcast by Mourinho, made a positive impact off the bench.

The winner came late on from the penalty spot, as Moussa Djenepo fouled Winks just inside the box, as VAR confirmed. With Kane watching from the stands it was left to Son to step up and fire home to secure the win that took Spurs within two points of the top four.

It is early stages and it’ll be baby steps for Spurs under young boss Ryan Mason, but this was the perfect start for the youngest manager in Premier League history, and perhaps Gareth Bale's Spurs story isn't finished just yet.