“Oh, no. They’ve picked Gary bloody Lineker again, have they?”

That was the first time I realised my dad wasn’t as convinced as I was that the Everton striker was a decent bet in front of goal. I was young and Lineker’s goal in the 3-1 FA Cup final defeat to Liverpool was fresh in my mind. But my old man had seen England centre-forwards come and go, he had known plenty who had beaten up on lesser nations and not made the difference when it mattered.

And this one mattered. England were facing Poland in Monterrey at the 1986 World Cup, having lost to Portugal 1-0 in their opening game and then drawn 0-0 with Morocco after Ray Wilkins’ sending-off. So when my dad walked in the room shortly before kick-off, he wasn’t shy in making his disappointment known.

Lineker, like England, had drawn blanks in those opening two fixtures, and his international record stood at 15 games and six goals. Five of those strikes had come in two 5-0 victories against Turkey and the USA.

But that evening in Mexico, he had a first half from heaven. Three goals in a 25-minute spell ensured England a safe passage into the second round as runners-up in Group F. With each goal, Lineker’s mix of delight and relief grew, with his arms – complete with bandaged left wrist due to an injury he’d picked up in a pre-tournament friendly – extended further to the air with every ripple of the net.

He didn’t stop there. He bagged two more in the 3-0 win over Paraguay in the round of 16 and scored a late goal in the infamous quarter-final loss to Argentina. He was the World Cup’s Golden Boot winner that year, and never again would I hear anyone refer to him as ‘Gary bloody Lineker’.

His performances that summer earned him a move to Barcelona, and in 1989 he returned to the UK to play for Tottenham Hotspur. The following summer he was scoring World Cup goals for fun again. After netting in the Group F opener against the Republic of Ireland he converted two vital penalties against Cameroon in the quarter-final to turn a 2-1 deficit into a winning 3-2 lead. Another goal in the semi-final against West Germany gave England hope, but they went on to lose on spot-kicks. We’d be there again, and again, and again.

But we’ve never again had a player score with such reliability on the very biggest stage as Lineker during that period. He has 10 World Cup goals, more than any other England player. Harry Kane has six and time in the bank, but Lineker remains the man to beat. 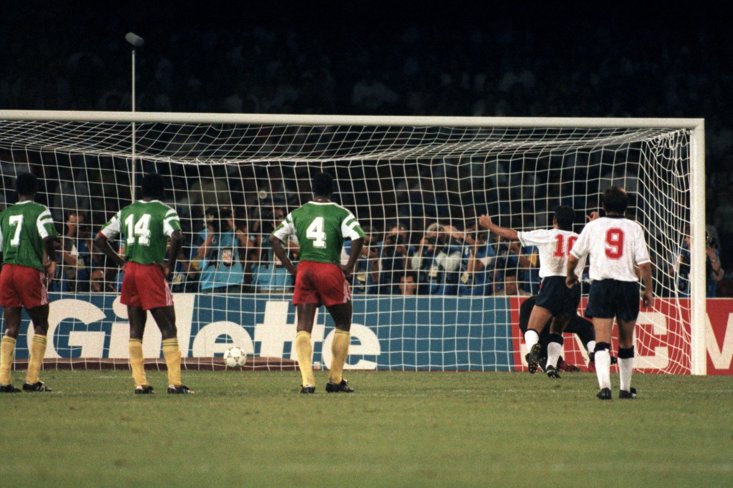 LINEKER FIRES HOME ONE OF TWO PENALTIES AGAINST CAMEROON

After a £2 million move to the J-League’s Grampus Eight in 1992, Lineker’s career began to wind down. A troublesome toe injury would blight his spell in Japan, where he was widely known as the ‘Noble Barbarian', and he eventually called it a day on 21 September 1994 as the scorer of over 300 professional goals, including 48 for his country.

It could have been more. He was replaced by Alan Smith in what turned out to be his final game for England, at Euro 92 against hosts Sweden, just one goal shy of Sir Bobby Charlton’s then-record goal tally of 49. In 26 fewer games than Charlton, Lineker had proven himself to be as prolific a striker as the nation had seen in decades.

For what he did at those 1986 and 1990 World Cups, he will forever remain an England great.

‘Gary bloody Lineker’. He did more than flog crisps and talk on the telly, you know.