There’s no shame in drawing with Crystal Palace. Just ask Manchester United. For the second time in a week, Patrick Vieira’s side took a point off an in-form side chasing Champions League football at Selhurst Park. The Magpies had chances to improve upon the 0-0 scoreline that remained throughout the match, but lacked the incisive finishing to take advantage of them.

A quiet first half saw precious few clear-cut chances carved out by either side. Kieran Trippier teed up Dan Burn for a shot at Vicente Guaita. Fabian Schar laid off the ball for Joelinton to cut inside and also find the goalkeeper’s gloved hands.

A running battle between England players Marc Guehi and Callum Wilson broke out across the half. Guehi was booked for one coming together and seemed lucky to escape further punishment when blocking the striker’s progress later on. The resulting free kick saw Trippier trigger an elaborate routine that ended with Joe Willock firing his shot over the bar.

Newcastle had the bulk of the momentum in the first half, pinning back Palace. This was best typified by Wilfried Zaha having to track back into his own box to rescue his defence as Miguel Almiron shaped to shoot. But The Eagles did have a chance just before half time. Chris Richards rose above the towering Dan Burn to direct an Eberechi Eze corner over the bar. 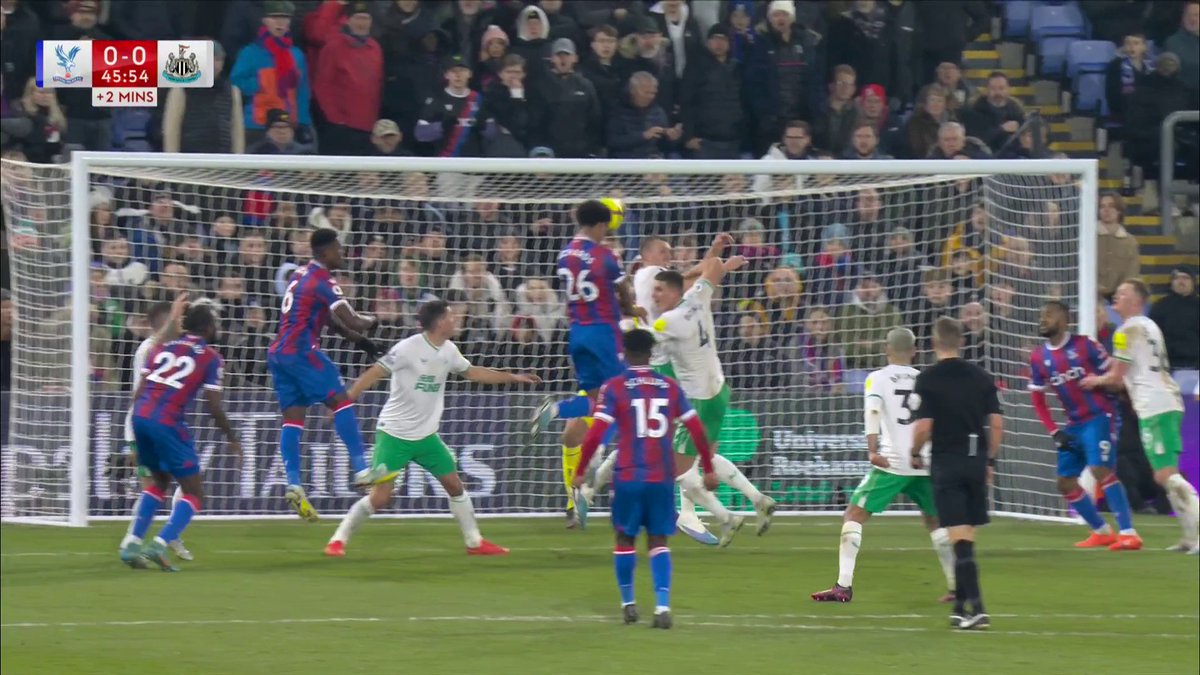 Newcastle nearly enjoyed a dream start to the second half. Wilson glanced a set piece header towards Guaita, who had an easy job on the save in the end. Any further to either corner of the goal and the Spanish shot-stopper would have struggled to reach it. But as it was, the England striker’s attempt was hospitable to Guaita.

There was concern in the Palace dugout as Zaha departed the field injured. The creative fulcrum of this football club, he had endured a quiet evening but his continued presence is still vital to this side. The former Manchester United winger left the field in a triple substitution that also saw Eze and Jeffrey Schlupp depart. The trio was replaced by Jean-Philippe Mateta, Will Hughes and the man who scored a wonderful free kick here less than 72 hours before: Michael Olise.

Mateta nearly made his presence count early doors. Jordan Ayew looped a ball over to him in the box, which Mateta fired on goal. Nick Pope reacted superbly to paw the ball behind with one of the finest reaction saves of the weekend. At the other end, Alexander Isak sent yet another header straight at Guaita.

This was not a vintage Newcastle display but it easily could have been. With the January transfer window still wide open, the temptation must be there for manager Eddie Howe to pursue a prolific goalscorer. Wilson is not netting consistently while Isak has been injured. The Magpies have only scored more than a single goal once in their last six games. Adding to the firepower that top scorer Almiron offers should be a priority so Newcastle can steer home their best season in many a year.