Football
News
Xhaka has been involved in four goals in the Premier League this season
Conor Keane
06:55, 24 Sep 2022

Arsenal have been a joy to watch. When was the last time we said that? Mikel Arteta’s side have looked the business in the first seven matches of the Premier League season and one player who has undergone a renaissance these past few weeks is a person who constantly divided opinion in a Gunners shirt, Granit Xhaka.

The Swiss midfielder is taking part in his seventh season with the Gunners since joining from Borussia Monchengladbach in the summer of 2016. He arrived at the Emirates Stadium as a confident, progressive central midfielder but he was quickly shoehorned into a deeper role in the middle of the park, which left him exposed to often unjust criticism.

Supporters are sometimes quick to forget that footballers are human beings and that the heavy abuse they receive from the stands and online can take its toll on a player's and their families' well-being. Xhaka was targeted as the club's scapegoat on many occasions when games didn't go so well, whether he was to blame or not. But there is only so much abuse you can take.

It all came to the boil in October 2019 during the Unai Emery days. Xhaka wasn’t having the best of afternoons when his side threw away an early two-goal lead to draw with Crystal Palace at the Emirates Stadium. The midfielder was subbed off around the hour mark and the whole stadium echoed with cheers and then boos towards him when his number was held aloft by the fourth official.

He had had enough. He wasn’t going to stand for it anymore. As he was barraged with booing on the long walk over to the benches, he initially waved his arms signalling the fans to be louder while uttering “f**k off” as he made his march. He then cupped one of his ears towards the stand and headed straight for the tunnel, removing his shirt in the process. It felt like that was very much the end of his disappointing Arsenal career and that there would be no way back for him. 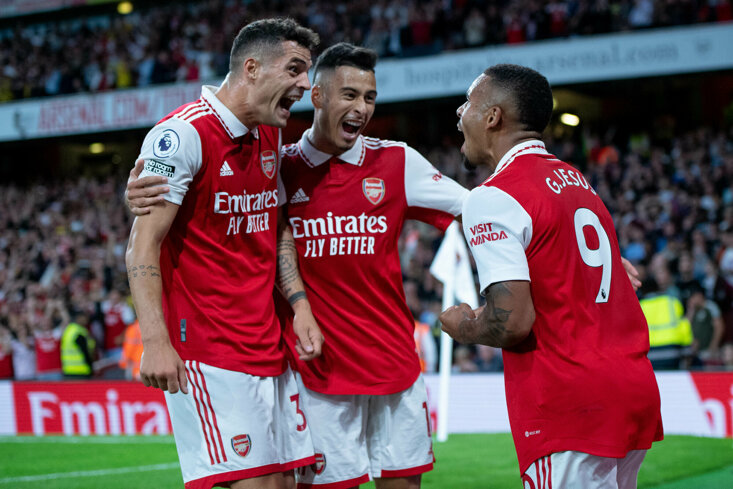 Fate had other plans. His Arsenal chapter was not yet complete. Less than two months after the incident, Emery was relieved of his duties and former Gunners player Arteta replaced him as manager having learned under the wing of Pep Guardiola at Manchester City.

And since stepping into management with the side he once wore the jersey for himself, Arteta has slowly repaired the relationship between Xhaka and the fan base, while steadily rebuilding the Arsenal side.

Xhaka has been an ever-present figure in Arteta’s legion, making 110 appearances in all competitions. And thanks to some excellent recruitment, he is playing in a more advanced role to match the one he normally populates for Switzerland (including some memorable performances during Euro 2020). It was the role in which his excellent performances for Monchengladbach had earned him a move to north London in the first place. His turn in fortunes has come as no surprise to those who have followed his career.

The 29-year-old’s role in the team has been key to their early success in 2022-23. He has such an influence in play now and is delivering excellent performances on a weekly basis. The supporters are now beginning to see the player that joined them seven summers ago.

In the Premier League he has been involved in four goals for the Gunners, scoring once and providing three assists - outperforming his totals from the last three seasons. His goal may have been a gift against Leicester City but it put the biggest smile on his face as he gestured a heart with his hands towards the crowd. Then last time out he picked out Gabriel Jesus with an inch-perfect cross in Arsenal’s 3-0 dominant display against Brentford, Jesus shined his boot in gratitude as part of the celebrations. Former Arsenal forward Ian Wright described him as having "one of the best left feet in the Premier League".

Most of Arsenal’s positive play is going through him now and he has evolved into one of Arteta’s most dependable figures on and off the field.

What was most interesting about that afternoon in west London in Arsenal's most recent fixture was that you could hear the travelling fans bellowing out the Swiss international’s name from the away end to the tune of ‘Glad All Over’ by the Dave Clark Five.

It certainly seems as though the player has fallen back in love with the club and the Gooners, as he said after the match: “To hear the fans say my name, to sing the song for me, it’s a very special day for me.”

And judging by how the supporters have responded to his outstanding contributions so far this term, it appears as though they are starting to fall in love with him too.