Australian Superstar Greg Inglis marked his Warrington debut with a try as the Wolves ran out 50-26 winners in a thoroughly entertaining clash with Hull KR at the Halliwell Jones Stadium.

The former golden boot winner had a quiet first 40 minutes as a Betfred Super League player with Warrington tending to target Hull KR’s defence in the middle of the field, whilst the Robins directed the lions-share of their attack down the Wolves’ right edge with the Australian Centre on the left.

When he did get the ball in his hands in the first half, it was in positions where the defence had already closed down the space, and he was unable to get his arm free for one of those famous offloads.

Hull KR took an early lead at the Halliwell Jones, with Shaun Kenny-Dowall managing to force his way over and get the ball free in a tackle to dot down.

Warrington responded quickly when Toby King went over to score, and then quickly backed that try up with a second; Ben Currie putting the Wolves in the lead from close range.

It looked like Warrington had taken control of the game with that score, but the tide turned again shortly after as Rovers again looked to their left wing, and Ryan Hall was on hand to continue his fine start to the season with another try.

Hull KR have been involved in some absolute blockbusters so far this season, and with 35 minutes played, this game was shaping up to be another. Jordan Abdull, who had just nudged Rovers ahead with a penalty, then followed up with a try to put Hull KR 18-12 ahead at the break. 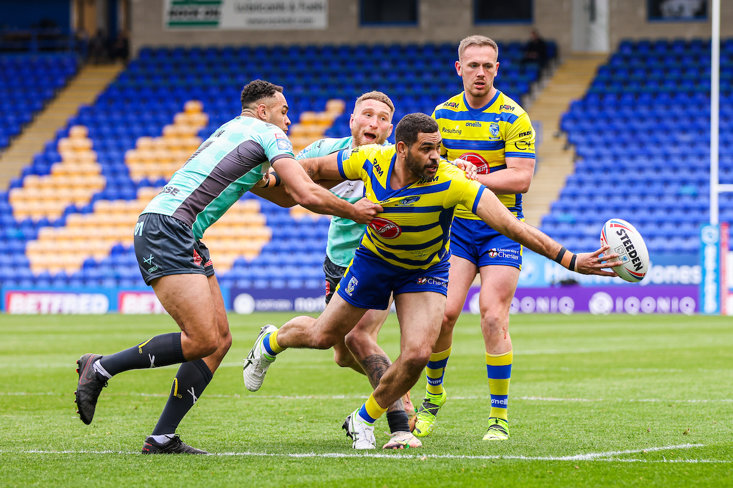 The first half had been a real to-and-fro affair, and the second 40 started in much the same fashion, when Currie took advantage of Inglis’ clever decoy line to catch the Rovers defence with their hips turned and score.

Eight minutes later we got out first glimpse of Inglis’ potent attacking threat, when he took a short pass, and had the experience and nouse to turn his body in the tackle and get his arm free to open his Super League account at the first time of asking.

Yet again however, Hull KR refused to yield and they were right back in the game just four minutes later when Ryan Hall was put over for his second try of the game, pulling the scores level at 22-22 in the process.

An injury to Matty Ashton forced Inglis into the fullback position for the remainder of the game, but there wasn’t much sign of this disrupting Warrington’s spine, as Daryl Powell scored a trademark effort from the play the ball to put the Wolves back in front in what was quickly turning into one of the most entertaining games of the season.

This try turned out to be a key moment in the game as Warrington then hit KR with a quickfire double sucker punch, with Jake Mamo continuing his hot-streak and Josh Charnley also adding four points. Kane Linnet did cross with about 10 minutes left on the clock to give Rovers hope, but a Danny Walker try and a second for Josh Charnley on the hooter bought up the half century and a comfortable 50-26 win for Warrington.

There should be no wild headlines about Inglis returning to Rugby League with one of his vintage performances, but Steve Price and the Warrington coaching staff will be satisfied with his steady start in a Warrington shirt.

Hull KR will rightfully feel disappointed with conceding 50 points, but the scoreline was a harsh reflection of their performance as they continued to show signs of improvement from last season.