Netherlands, Senegal, England and USA are all safely into the last 16 of the 2022 World Cup, and now all of our attention turns to Group C and Group D as the likes of Lionel Messi and Kylian Mbappe take to the field again.

Group C is by far the most exciting today. All four sides can still qualify, and Argentina could easily be knocked out early.

Table-toppers Poland only need a draw or a win against Argentina to reach the last 16, after beating Saudi Arabia 2-0 in their last match. Robert Lewandowski’s men could also qualify with a narrow defeat, if Mexico draw with Saudi Arabia.

Argentina will go through with a win over Poland, and will qualify with a draw if Saudi Arabia fail to win against Mexico. A draw is also enough as long as Mexico don’t hammer Saudi Arabia by four or more goals.

If Saudi Arabia beat Mexico, they’re through. They can also advance with a draw if Poland lose by four or more goals to Argentina. If they win, and Argentina draw with Poland, Argentina are out and Saudi Arabia would top the group.

Mexico, though, will struggle to qualify. They must beat Saudi Arabia by four or more goals, or win and hope Poland can beat Argentina. 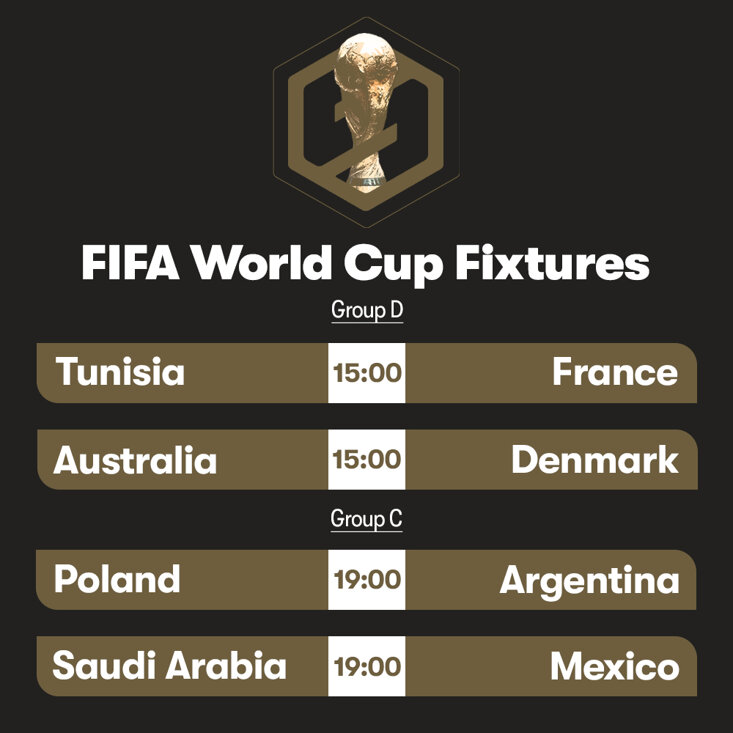 Onto Group D, and it’s one England fans should be keeping an eye on. If the Three Lions can beat Senegal on Sunday, they will more than likely play the winner of this group in the quarter finals.

And that looks like France. They have already qualified and will win the group with a draw or victory against bottom side Tunisia.

Surprise package Australia will head into the last 16 if they beat Denmark. They will also qualify with a draw if Tunisia lose or draw against the French.

Denmark will advance if they beat Australia and Tunisia fail to win.

There is a slither of hope for Tunisia, but they must beat France and hope Australia draw with Denmark to go through. If Tunisia and Denmark win, Tunisia will need to better the Danes’ winning margin to reach the next round.