We’re now just 77 days away from Euro 2022, when England will host Austria at a sold out Old Trafford in the curtain-raiser. It promises to be another landmark tournament for women’s football after the success of the World Cup in France that saw an average of almost 22,000 fans per match, but the FA have already undersold this event.

England came within a whisker of making that World Cup final and it seems the hype for Lionesses has only increased in the three years since. Every group stage game Sarina Wiegman’s side are involved in has already sold out, as they go from Old Trafford to Brighton, before finishing at St Mary’s on the south coast.

Three Premier League grounds sold out for women’s football is a mark of the sensational progress that has been made, while the final at Wembley has also sold out months in advance. There’s clearly a huge desire to watch this tournament, and yet some much smaller venues are being used, which not only limits the possible attendance, but disrespects the elite players on show.

Instead of the Etihad Stadium, three of Group D’s games will be played at Manchester City’s Academy Stadium, which has a capacity of just 4,700. Meanwhile Leigh Sports Village, with room for just 8,000 fans, will host three group games and a quarter-final. It’s a move that has drawn the ire of fans and players alike, with Iceland midfielder Sara Bjork Gunnarsdottir openly criticising the decision on Their Pitch podcast.

"It's shocking. Playing in England there are so many stadiums and we have a training ground from City taking what, 4,000 spectators.

"It's embarrassing. It's not the respect [we deserve]. Watch women's football today, they are filling out the stadiums. You see Barcelona and Madrid, 95,000 watching the game. They are not prepared that we will sell more tickets than 4,000.

"It's disrespectful towards women's football because it's so much bigger than people think. You think women's football is getting two steps ahead but then something comes up like that it's just a step back."

When 91,553 gathered at the Camp Nou to watch Barcelona’s Champions League quarter-final, it felt like a breakthrough moment for women’s football. After years of rapid progress, here was the largest football attendance in the entirety of Europe, and they weren’t watching men. 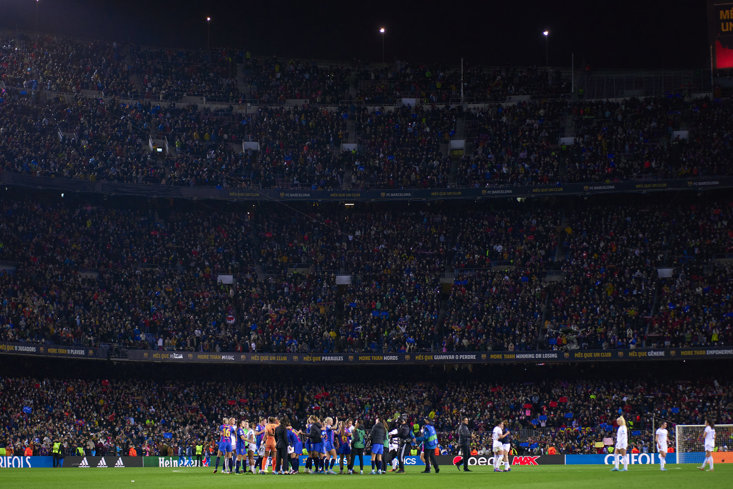 With Covid-19 restriction lifted in England, this summer should be another celebration of women’s sport as the nation comes together, yet these players are being denied a wonderful opportunity of playing in world-renowned stadia. Sure, Belgium vs Iceland is unlikely to draw a crowd of 20,000+, but by limiting the attendance to less than 4,700, the FA have shot themselves in the foot.

It means less prestige, less money if the crowd does exceed that level, and less excitement around the event. England could sell out Wembley for every match, I have no doubt about that, but yet only the final is being played there.

Over 100,000 people saw the two semi-finals at the 2019 World Cup, yet the semi-finals for this tournament are being held at Bramall Lane and Stadium MK, limiting the possible attendees for the two semis to just 62,500.

In a land of such great football grounds, with huge capacities, it's a national disgrace that the semi-finals in particular are being so undervalued. This is a showpiece event being held in a nation of football lovers, and yet the FA haven’t quite grasped that fact.

We’ll leave the final words on this one to Gunnarsdottir, who is hopeful that the organiser will reconsider.

“I don't know what's going on in their heads or even if they follow women's football.

"If you did it's common sense, just follow women's football today it's exploding. It's getting so much better. It's just stupid to speak about it because it doesn't even make sense. It's frustrating to be honest.

"They should 100% reconsider it because of the reaction and just see how fast tickets are going."