On the day of Ernesto Valverde becoming the first of their managers to be sacked mid-season in 17 years, Barcelona solidified their domination of the beginning of the week’s headlines by taking the top spot in the Deloitte Football Money League. It is the first time the incumbent La Liga holders have procured first place in the study’s 23-year history, breaking the duopoly of Manchester United and their Spanish rivals Real Madrid.

Barcelona can declare a 21.2% increase in revenue on 2019. Up to a mammoth €840.8 million (US$936.2 million), the Blaugrana surged to a €150m gain upon last year and can also claim to have produced the widest difference between first and second, with €83m/ £73.6 on Los Blancos, leapfrogging them by some distance to top the table.

Dan Jones, a Deloitte Sports Business Group partner, said of the results: “Barca is a clear example of a club adapting to changing market conditions, reducing the reliance on broadcast revenue and focusing on growing revenues within its control.”

It was an interesting year for Barca who retained the Spanish title (finishing a considerable 11 points ahead of Atlético Madrid) but were humbled in the Champions League semi-finals by eventual winners Liverpool and defeated in the Copa del Rey final by Valencia.

The recent figures ultimately positions them once again as the behemoth to beat. They hold the second most expensive kit deal in football history with a ten-year Nike deal running until 2028 worth £100m. Real Madrid have continued to partner with Adidas until 2030 in a £110m treaty.

However, Barca’s respective relationship with their sportswear giant is notably different.

“The main reason for their ascent in the Deloitte study is that Barcelona have taken their merchandising sales in-house,” Football Finance expert Kevin Maguire of the University of Liverpool and the Price of Football podcast told The Sportsman.

“Previously they were just getting a commission from Nike for every euro’s worth of sales but now that they’re taking 100% of the sales value on every shirt, on every track-suit, every other piece of merchandise and clearly being such an iconic club and being such a successful club this has made such a significant difference to the numbers.

“Barcelona know their own club so much better. They know what sells. It was simply a contractual arrangement with Nike that Barcelona would take on more responsibility.

“Nike still, of course, get paid for providing and manufacturing the kit but the actual sales process is now being organised by Barcelona for everybody that comes to the Nou Camp, and given the capacity of the stadium (just shy of 100,000) and the fact that they’ve got stadium tours and things means there’s a huge footfall in terms of numbers turning up on a regular basis.” 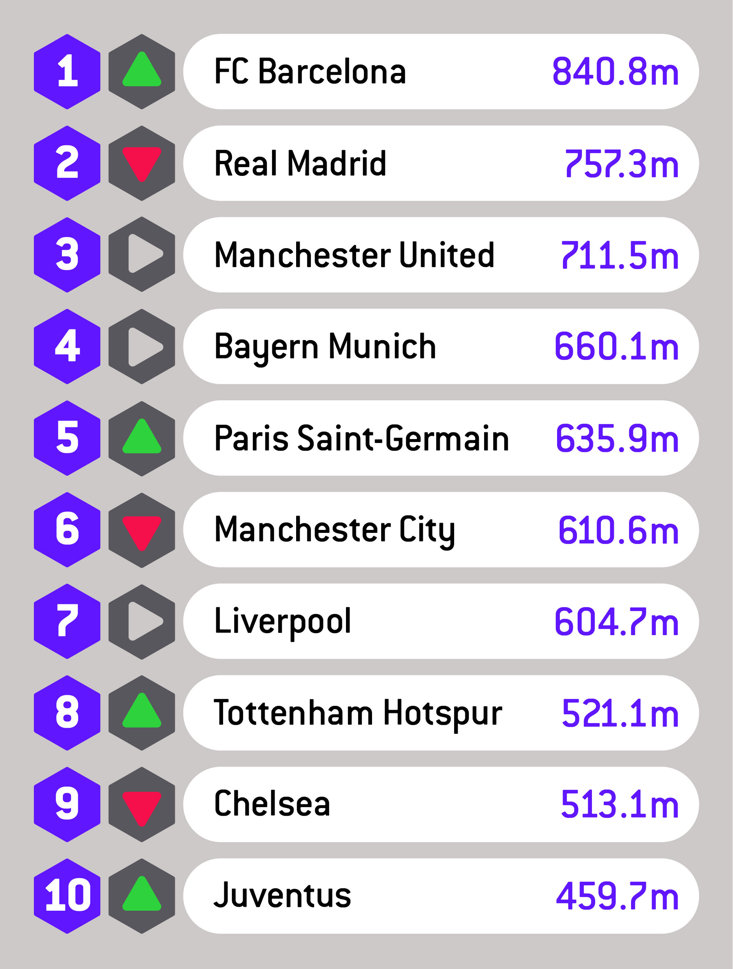 “Because Barcelona have taken sales in-house, not only are they getting the up-front fees from the manufacturers but they are making a greater proportion on each individual shirt being sold. When we talk about these deals being worth £100m plus, that’s just a flat-fee and then on top of that you’ve got a percentage on each sale being made. Barcelona are now making a greater percentage when you put the two figures together and they should, and have been, generating more money than Real Madrid.”

“Football clubs get their revenue through three sources: broadcasting, commercial, and matchday. Barcelona have sold out their matches to a greater extent than Real Madrid. They have been more successful both domestically and in Europe, although neither club had a spectacular year, but Barcelona did make greater progress in the Champions League than Madrid. There’s huge revenues to be earned both in prize money - for example Liverpool made over £100m / €110m last year purely from prize money alone - and on top of that you have the matchday income. It has progressed there and was a contributing factor.

“In addition, Real Madrid have also lost Ronaldo who is the superstar, the person most sponsors want to be pictured with.

“Whereas if we go to Barcelona, they still have Lionel Messi and is that someone that sponsors and commercial partners are willing to pay for and Barcelona have leverage on that."

Barcelona once again bought big in the summer with an expenditure of €255m/ £217.6m including Brobdingnagian purchases Antonie Griezmann (€120m/ £107m) and Frenkie De Jong (€75m/ £65m). However the transfer spending doesn’t have a direct effect on revenue.

“Revenue figures are from the sort of day-to-day sales and activities of the club,” said Maguire, “If you are to think of it as player-trading, you’re only likely to account for four or five sales or purchases a year. What is impacted is the profitability of the club because profits is your sales revenue less your costs so therefore when you recruit players they tend to come in on higher wages but also you’ve got the cost of their transfer fee.

“The way that that’s dealt with is if, for example, Antoine Griezmann came in on a five-year contract for €135m you’d spread that over the five years, that works out to €27m a year as a cost - that impacts upon the club’s profitability as long as the club continues to be successful in La Liga and the Champions League, and you can absorb the additional costs because you’ve got the extra income coming through.”

Barcelona and Real Madrid are the only Spanish clubs to feature in Deloitte’s top ten, with Atlético outside in 13th. Deloitte estimates that the 20 top-earning clubs generated a record €9.3bn, up 11% on the previous year. There are five Premier League clubs firmly in the top ten, with champions Manchester City in sixth-place and showing gains on their cross-town rivals United.